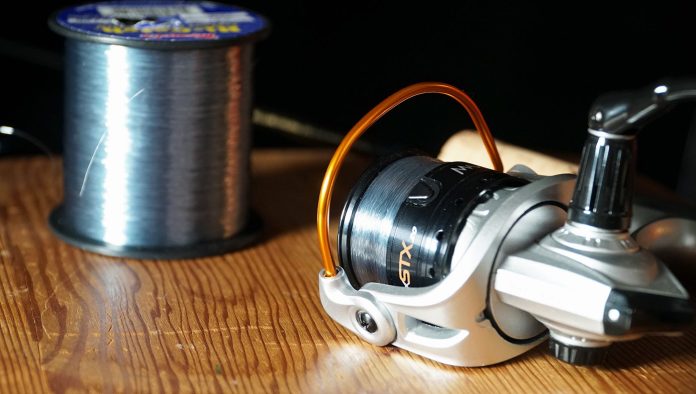 Why do you need to know how to spool a spinning reel the right way? Because anything can fail during a fishing trip. Your hook might bend out during a fight. You might lose the handle screw in your reel, rendering it useless. The tip of your rod can snap for any number of reasons. But I’d argue that nothing fails more often than line. This can happen because there was a frayed spot you didn’t notice. Maybe you’re just about to send a popper into a school of blitzing bass and boom—a wind knot catches in the guide and your lure snaps off. Some of these woes can’t be easily avoided unless you’re scrutinizing every inch of your line regularly, but many (like those wind knots) can be minimized with proper spooling.

Putting line on a spinning reel may seem uncomplicated, but there are some commonly overlooked steps that can lead to heartache. Keep these in mind next time you come home with a fresh spool from the tackle shop. And take the time to follow the instructions below for how to spool a spinning reel if you want fewer failures—and more successes—on the water.

Related: The Best Spinning Reels for Under $100

Place your filler spool down on a flat surface so the logo is facing up, and pull a little line off. What if the logo came off your spool? No problem, as long as the line comes off in a counter-clockwise direction, you’re good.

Step 2: Run the line through all the guides.

Thread the line through all of the guides, from top to bottom, all the way down to the reel. Lot’s of people make the mistake putting line on straight from the filler spool or threading it only through the first guide. But not you. You’re going to do it right.

Step 3: Open the bail and tie the line to the reel’s spool.

Don’t forget to open the bail before you tie the line to the spool, or you will realize it as soon as you’re done and have to do it over again. The best knot for this is an arbor knot. If you don’t know how to tie one and don’t have access to the internet, don’t let it keep you off the water. A few overhand knots will usually do the job, as long as you don’t get totally spooled. But the “usually” part is why I always use an arbor knot.

Step 4: Close the bail, and fill the reel with line.

You’ll spend more time untangling line than fishing if you get this wrong. Leave about an 1/8th of an inch from the spooled line and the very outer edge of the reel’s spool.

Step 6: Cut the line from the filler spool and secure.

Now’s the time to tie on a hook or lure, or if you won’t be fishing for a while, just wrap it tightly into the reel spool’s line keeper until you’re ready to hit the water.

How Not to Spool a Spinning Reel: The Biggest Mistake

The biggest mistake I see people make when filling a spinning reel is not minding the direction in which the line is transferring from the filler spool to the reel’s spool. It’s an honest mistake, as it’s not an intuitive detail, but it is critical. When you cast a spinning reel, the line is flying off the spool in coils, with the weight of the lure or rig providing the forward momentum to release those line coils and straighten them out as they pass through the rod guides. During this process, a spinning reel’s spool is stationary—unlike with a baitcasting reel’s spool, which spins during the cast, releasing the line in a parallel orientation straight down the rod guides. When spooling any reel, you want the filler spool to mirror how the reel functions during the cast. Or, more simply, you want to put the line on a reel the same way it will come off the reel.

In the case of a spinning reel, you don’t want to run a rod or dowel through the spool and allow the spool to spin (like a baitcasting reel’s spool would) as you fill. Instead, you want to keep the filler spool in a fixed position with the label facing you, so it comes off in coils as you wind. The easiest way to do this is to have someone hold the spool for you while filling. If you don’t have a helper, put the spool on the ground with the label facing up and try to stop it from moving as you’re winding. Now, if all this spool orientation stuff seems like a trivial detail, it won’t once you understand line memory.

How to Spool a Spinning Reel to Avoid Twist

All fishing line has memory, meaning it will retain the shape of whatever it’s tightly wrapped around. Monofilament and fluorocarbon lines have more memory than braided lines, but regardless of what you’re using, shape and memory must be considered when spooling.

If you were to let a filler spool rotate while filling a spinning reel, you’re creating mixed messages. It’s leaving the filler spool in a straight line, but then it’s being forced into coils as it reaches the reel and starts getting wound around the spool.  This creates twist. You can’t always see it with the naked eye, and it may appear that you’re doing a fine job filling the reel, but you’re just creating a huge headache.

When you go to cast, the line is going come off in coils and try to untwist at the same time. If you happen to be using low-grade monofilament—which tends to have the worst memory—you’re going to wind up with an irreparable bird’s nest. Even if you’re using braided line, the extra twist you create by improperly spooling can weaken it much faster—and cost you fish.

By making sure the line is leaving the filler spool in coils and keeping good tension on it so it’s not wrapping too loosely, you’re helping it imprint to the reel’s spool. You want to create a bit memory so your line retains the shape of the specific spool. As you use the line more and more, the imprint will just get stronger, and this will actually make wind knots and bird’s nest less likely.

How to Spool a Spinning Reel Evenly

Another common mistake I notice when folks spool spinning reels is winding line direct from the filler spool onto the reel. They don’t take the time to run the end of that line through all the rod guides first, and this can create more issues. If you’ve ever seen a spinning reel that’s line is shaped like a cone on the spool, it’s likely because the angler skipped this critical step, which results in uneven laying of the line.

As you turn a spinning reel’s handle, the spool moves up and down, transferring the line from the bail roller onto the spool evenly. To do this, however, the line needs to be coming in from directly in front of the spool. By stringing the line through all the guides, you’re giving it plenty of room to channel itself straight into the reel. Even if you just run line through the first one or two guides closest to the reel—another common practice—you can wind up with an uneven fill. Spinning-rod guides go from narrow at the tip to wide and the base for a reason—this helps shape the coils so they lay evenly and pack perfectly on the spool. Reeling aside, if you hook a big fish that’s taking drag, line coming off a spinning reel unevenly can cause the drag to stutter or even cause the main spindle to bend, and you’ll be kissing that trophy goodbye.

The Air & Space Brief: The case for selling F-16s to Argentina; Boosting officer diversity; What the Artemis launch means for DOD