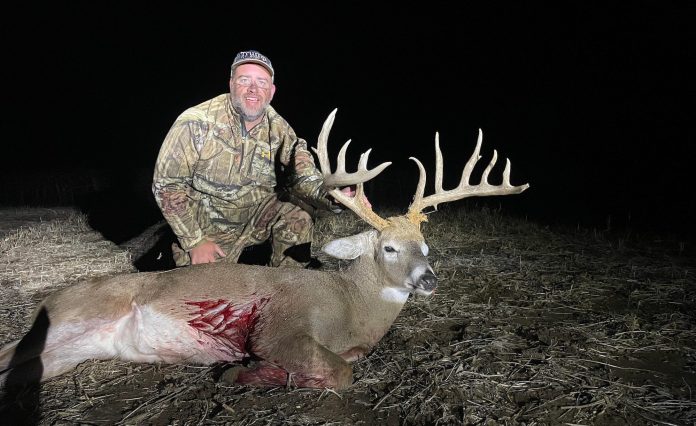 Jared Paden recently scored on a whitetail buck any hunter would be proud of: A 190-2/8-inch Kansas monster. Paden had eyes on the buck since last season, and ended up breaking his bow before he could get a shot at him, but he managed to put it all together in the end. Here’s his story.

Last season Paden had trail camera photos of a clean 9-pointer. On October 26 of this year, he saw images of the same deer on a friend’s farm in Kansas where he has permission to hunt. Paden noticed right away that the deer grew—a lot. Four days later, on October 30, Paden saw the deer in the flesh while hunting, but the buck never made it into range. Still, he felt confident he’d cross paths with the deer again.

But, a few days later, on November 4, Paden’s season took a turn. “I broke my compound bow,” Paden says. “I bought some new arrows, shot about five, and the sixth arrow exploded when I was shooting it. It jumped my string and bent a cam. My bow is 10 years old so I struggled to find a new cam. On Friday of that week, I drove to the bow shop and bought a crossbow while they repaired my compound. I knew that buck was on this farm, and I wanted to stay in the hunt.”

Back in the Hunt

The next day, on November 5, after a big front with 3-inches rain pushed through, Paden was back in the woods. It stopped raining around mid-morning, and with 10- to 15-mph winds to cover his entry route, he eased toward his spot.

The big buck spent most of his time in an area where there were very few trees. Paden said that he’d bed in small pockets of cover, and rarely walked within range of any place that would hold a treestand. “I knew I had to lie next to a cut soybean field without a tree within 100 yards if I wanted to get a shot,” Paden said. After seeing the buck a couple of times, and studying trail camera photos, Paden found a spot where deer entered the field, and there was some short, grassy cover where he could hide.

Hunting a buck from the ground without a blind isn’t easy. But soon after settling in for the afternoon, Paden started seeing deer. A 4-pointer cruised through, then a 140-inch 9-pointer walked over the ridge into view. Paden heard the buck he was after before he could see it. The giant buck grunted twice, emitted a buck roar, and chased the 140-inch 9-pointer straight toward Paden. Paden didn’t expect the deer to be moving just yet, and he wasn’t ready.

Paden Gets a Shot

Paden’s crossbow was behind him, and he moved to grab it and make a shot. After a few tense moments, Paden got his crossbow and a clear look at the big buck’s vitals. Paden drew a deep breath and took a broadside 30-yard shot. The bolt connected, and the deer ran off. It went 100 yards into the cut soybean field and tipped over within sight.

“With the history I have with this deer, and the way the hunt went down, I’d say it was the best hunt I’ve ever had,” Paden says. “Everyone was amazed at the size of the deer. It’s not common for a buck this big to be shot here. You hear of big bucks like this, but it’s rare someone you know shoots one, and I definitely never thought I would.”

Overall, the deer scores 190 2/8 inches (gross). Based on body size and composition, as well as the buck’s jawbone, Paden believes it to be a 4-½-year-old deer.

Florida Is About to Get Hammered by Hurricane Ian. Let’s Pull Together.