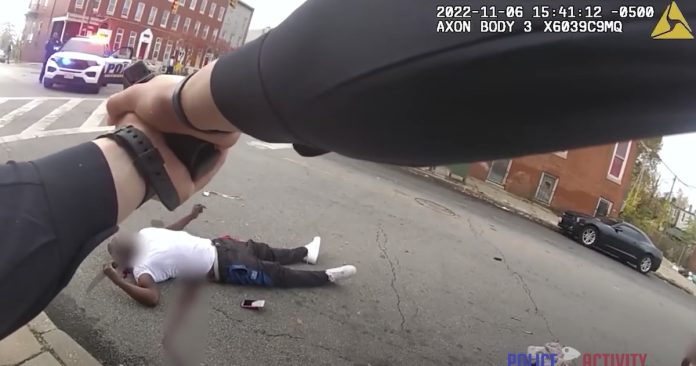 Earlier this month, Baltimore police officers responded to a disturbance that ended up with the fatal shooting of community activist Tyree Moorehead.

The incident occurred on Sunday, Nov. 6th at the intersection of Lafayette Ave. and North Fulton Ave. in West Baltimore.

Moorehead was holding a knife when the officers arrived at the scene. They ordered Moorehead to drop the knife and get to the ground. Rather than complying with the officer’s instructions, Moorehead rolled on top of the woman, still holding the knife.

One of the responding officers opened fire on Moorehead, firing multiple shots. Moorehead was pronounced dead after being taken to the University of Maryland’s Shock Trauma Center.

Body camera footage was released to the public by Baltimore Police Commissioner Michael Harrison. The officer who shot Moorehead was later identified as Zachary Rutherford.

Rutherford responds by shooting a full magazine, 14 rounds, at Moorehead. Rutherford then reloads a second magazine. He continues to order Moorehead to drop the knife and calls for backup.

A second body camera from Officer trainee Michael Hazel gives another perspective of the shooting. Hazel witnessed Rutherford: ordering Moorehead to drop down, firing his gun, and asking for medical assistance.

The woman was unharmed. Both Rutherford and Hazel have been placed on administrative leave while the department investigates the shooting, which is routine.

“We can see that it’s clear that the officer saved this lady’s life out there that day,” Commissioner Harrison said, according to Fox 45 News.

However, Tyree Moorehead’s father had a different opinion.

“I think it was overkill and it shouldn’t have went that far,” Carlton Moorehead told WMAR 2 News.

Moorehead was well-known for creating “No Shoot Zones” around Baltimore, where he would spray paint those words at the scenes of gun-related homicides in the hope that it would lead to a ceasefire henceforth.

After the shooting, Moorehead’s cousin, Carlie McCaskill, spoke to 11 News. McCaskill shared that Moorehead struggled with mental illness and had stopped taking his medication.

“We all go through things. We all suffer. That’s why we all (are) here in the world to help each one help one. And it just seems like it’s not enough being done. Everybody talks about it, but when you go to get help you get turned away,” he said. “I feel like this right here, it just was too late. It was too late.”

The Baltimore branch of the National Association for the Advancement of Colored People (NAACP) was contacted by several community members after the Moorehead shooting. The NAACP is investigating whether Rutherford used excessive force when he shot Moorehead.

They have reviewed the body camera footage that was released. They agreed that police intervention was necessary but still questioned if the use of force was justified or excessive.

“The life of a community member was lost on Sunday and that is never a situation to be taken lightly,” NAACP Criminal Justice and Public Safety Chair Nicole Chang said, per CBS News.

“This incident is an opportunity for us to have an open and honest conversation in our community, with BPD and with City leadership about how we can provide the best possible support for loved ones and community members that may be experiencing a mental health crisis and make a real investment in how publicly funded agencies can intervene in the most effective way,” she continued.