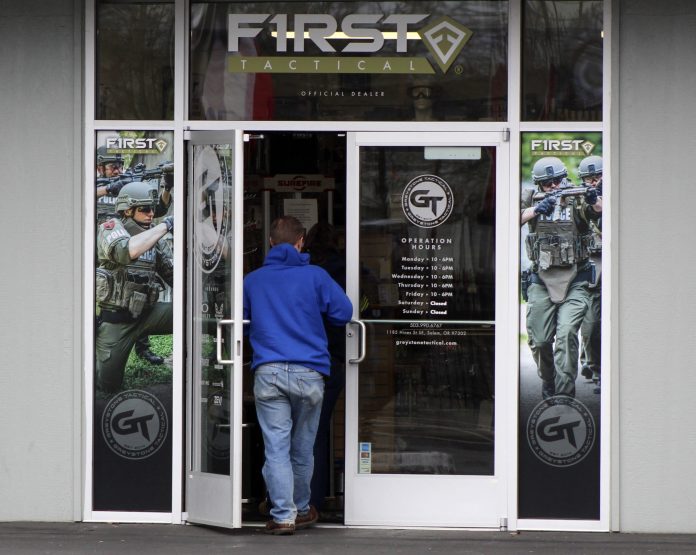 The right to keep and bear arms includes the right to acquire them. You can’t keep or bear guns if you can’t buy them. That’s a legal principle that the Redwood City, California seems determined to test.

Last month the Bay Area town, located between San Francisco and San Jose, enacted an “urgency” ordinance banning the retail sales of firearms for a period of 45 days while the city determines its options long term.

What dire “emergency” caused the city council to act? An interested party had applied for a business permit seeking to locate a gun store in the town and another had been sniffing around, apparently with the same intent.

God knows WE CAN’T HAVE THAT.

Naturally, their first inclination was to ban retail sales altogether until Redwood City’s biggest brains can come up with an appropriate solution to this nasty predicament. Monday night, the council voted unanimously to put the brakes on any permits or gun sales in town for at least 45 days.

That got the attention of the Second Amendment Foundation. SAF’s executive director, Adam Kraut, sent a love letter to the city, informing them that . . .

“By indefinitely preventing any firearms or ammunition retailers from opening within the city, Redwood City has directly impeded its residents from acquiring the means to protect themselves and their families, as guaranteed by the Second Amendment.”

While Kraut acknowledges there are examples of permissible regulations “that may be imposed on firearm and ammunition retailers that would comport with the Constitution,” he also had words of warning to Mayor Hale and the city.

“SAF has a storied history of suing municipalities, states, and the federal government for Second Amendment violations,” Kraut wrote. “Should Redwood City continue to deprive its residents of the ability to acquire arms and ammunition through an indeterminate moratorium on firearms and ammunition retailers from opening a business, SAF will examine all legal remedies available to it, its members, and those who may be affected by the City’s flagrant disregard of its citizens’ constitutional rights. It is my hope that Redwood’s City Council will promptly take action to remedy this situation to avoid unnecessary litigation.”

The manager of a retail plaza that had been the proposed location for one of the gun stores had this to say . . .

Others, like Roosevelt Plaza manager Maria Rutenburg, urged the council to vote no on the ordinance, citing the constitutional right to bear arms.

Describing the Second Amendment as “sacred to a lot of people,” Rutenburg warned the council that the ordinance would invite litigation. “This is going to be a national case. This is a big deal, and we’re not going to let it go.”

Neither will SAF. A little birdie tells TTAG that SAF is lining up a plaintiff as we write this. The question then becomes, how much of Redwood City’s tax dollars is the mayor and city council willing to spend to defend their ban?

Don’t look for SAF to blink. In a post-Bruen world, Redwood City’s ban — even a temporary one — has about as much chance of standing up to a challenge as Joe Manchin does if he runs for reelection. Even in the Ninth Circuit.