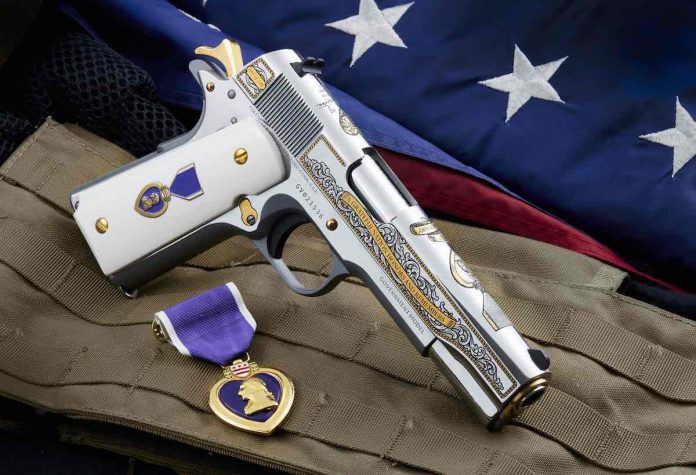 HAYMARKET, Va. November 11, 2022 —Veterans Day provides Americans an opportunity to recognize and honor those who have served our great Nation, and  SK Customs® is doing their part by highlighting their recent launch of the 240th Anniversary Purple Heart Commemorative firearm. This limited-edition design of the Government Model Colt 1911 Series 70 chambered in .45ACP honors the Military Badge of Merit, the modern-day Purple Heart Medal and those who have received it.

“It’s truly an honor and a privilege to pay tribute to those who have sacrificed their lives for our freedoms by releasing this limited-edition firearm,” said Simon Khiabani, owner and founder of SK Customs.  “We’ve partnered with Purple Heart Homes, the Purple Heart Integration Project and U.S Army veteran, Omar “Crispy” Avila, to recognize the men and women who have and continue to serve in our Armed Forces.”

Avila joined the U.S. Army in 2004 as an Infantryman. After deploying to Iraq in 2007, his vehicle was struck with a 200 lb IED, resulting in burns to 75% of his body and amputation below the knee of his right leg. Sergeant Avila retired from the U.S. Army in 2010 and devoted his life to serving other Veterans and helping wounded warriors across the nation. Avila shows us what it means to commemorate the Purple Heart through this gun in his brand-new video, available for viewing here.

The origins of the Purple Heart Medal trace back to August 1782 when General George Washington issued the Badge of Military Merit. This medal was bestowed whenever any singular meritorious action was performed. The award was reintroduced in 1932 as the Purple Heart Medal to honor the bravery of wounded soldiers. Today, it is awarded for a wide variety of combat injuries, deaths, those wounded in acts of terrorism and more.

Key features of the Custom Colt 1911 Series 70 include:

Each pistol is accompanied by an uncirculated West Point Minted National Purple Heart Hall of Honor 2022 Proof Silver Dollar with the West Point “W” mint mark and a certificate of authenticity singed by the Director of the U.S. Mint.

Through their SK Gives Back initiative, SK Customs has partnered with and will be donating a portion of the proceeds raised by the sale of this production to Purple Heart Homes and Purple Heart Integration Project along with a pistol to each foundation for their upcoming fundraisers.

With very limited availability, the Purple Heart Commemorative firearm can be pre-ordered for $2,900 today.

We have changed the future in being the industry’s only series driven custom, limited-edition, production of manufactured collectible firearms. The SK Guns® brand has taken the next step to further deliver our vision on what custom limited-edition means to us by being “Uniquely Custom®”.

Our team of master engravers, expert finishers, historians, and master gunsmiths dedicate themselves to every detail within our brand of SK Customs® production lines of custom firearms. To learn more about our past, current and future products, visit skguns.com.