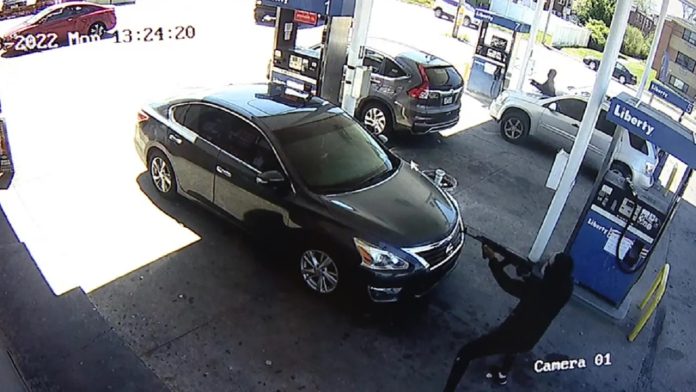 The anti-gun activists at The Trace – the propaganda arm of former New York City mayor Michael Bloomberg’s vast anti-gun empire – have created a new bogeyman in their ongoing war against our gun rights: Killer Gas Stations.

In a story published Monday titled “Gas Stations Become a Magnet for Violence in Philadelphia,” the author would have you hold your breath, suspend all disbelief and actually accept that mom-and-pop gas stations somehow play a role in the escalating gang violence sweeping the city, even though the author’s own data does not support such a claim.

According to the story, there were nine killings at Philadelphia gas stations during all of 2021 and 2022 – nine homicides in nearly two years. However, citywide over the same time period there were 1,021 murders – 562 during 2021 and 459 in 2022. To be clear, gas station murders made up less than one-percent of Philadelphia’s total homicides.

And who would a young anti-gun activist turn to in order to buttress his false claim that service stations are somehow culpable for murder? How about a local attorney who has filed lawsuits against nine gas stations because people were shot in their parking lots.

“I don’t think the public is aware of this because they may think of shootings usually happening at bars or nightclubs, certainly not at gas stations,” said attorney David P. Thiruselvam, who has filed nine lawsuits against gas stations. “But it’s becoming an epidemic, and the gas station industry is aware of it because it’s in the news all the time. But they are not doing anything about it.”

Not only is the gas station industry not doing anything about this “epidemic,” the City of Philadelphia didn’t leap into action either.

“While Philadelphia has no laws that address gas station safety, other communities have recently approved ordinances in response to violence there. Stations can no longer stay open 24 hours in Oak Park, a close-in suburb of Chicago bisected by the busy Eisenhower Expressway, while stations in DeKalb County, outside of Atlanta, must have working security cameras at all times,” the author wrote.

In yet another letdown for the author, a spokesman for the Philadelphia City Council told him that the city has already spent a record amount of taxpayer dollars on anti-violence initiatives, adding: “none is aimed specifically at bolstering gas station security.”

The Trace describes itself as the “only newsroom dedicated to reporting on gun violence.” It has slick digital packages that are chockfull of stories, photos and videos, so it’s easy to confuse them with an actual news website. But a news website it is not. Bloomberg founded The Trace in 2015 to create anti-gun agitprop for his other anti-gun groups, which include Everytown for Gun Safety and Moms Demand Action, which the billionaire former mayor also bankrolls.

While The Trace has always been a tad nutty, their killer gas station theory dials the nuttiness up to eleven. Nine gas-station killings over two years – in a city that saw more than 1,000 murders over the same time period – isn’t a trend. It’s a statistical blip at best, a non-story, pure propaganda.

Besides, Philadelphia offers its visitors and residents a plethora of other venues where they can get shot, stabbed or robbed – not just gas stations. The city is a violent cesspool, which is overrun by hundreds of drug crews, all competing for dollars, product and street corners.

According to a recent report from the Heritage Foundation, titled “The Blue City Murder Problem,” Philadelphia has the eighth highest homicide rate in the country. The study found that it was liberal policies retraining prosecutors from holding criminals accountable – not gas stations – that made Philadelphia one of the most dangerous cities in America.

While it is somewhat refreshing that The Trace is no longer blaming firearms or another inanimate object for the increasing murder rates in cities that historically have been run by Democrats, they’re still skirting the real issue.

Neither guns nor gas stations are responsible for murders in the City of Brotherly Love. It’s the soulless criminals with no regard for the sanctity of human life who are to blame. The longer anti-gun activists like those at The Trace try to shift the public’s attention away from the real problem, the longer it will take to stop the killings.