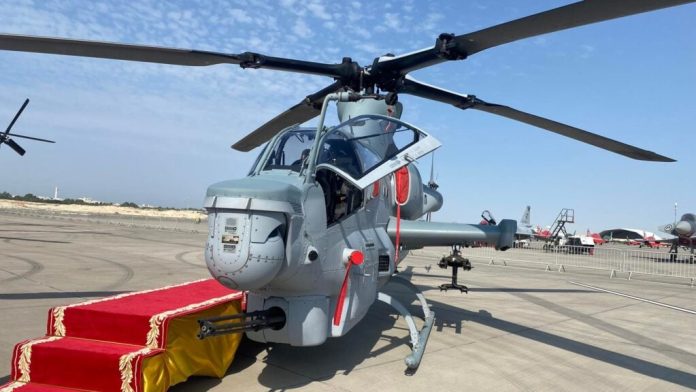 MANAMA — Bahrain’s AH-1 Zulu Viper helicopters made their debut at Bahrain International Airshow 2022 last week, after the gulf country received the first batch of six choppers over the summer.

“Bahrain took delivery of the first [six Vipers] via transport plane and [another] six aircraft will be out of production lines this coming year,” Bell’s vice president and program director of H-1 and AW609 programs, Michael Deslatte, told Breaking Defense.

After coordination with US government and the Royal Bahraini Air Force (RBAF), the second batch of six will arrive to Bahrain in the first half of 2023, Deslatte said.

At BIAS 2022, one of the new Vipers was displayed with Lockheed Martin’s Target Sight System on its nose, Northrop Grumman mission computers, and full glass cockpit.

Bahrain became the first foreign nation to procure the Zulu version thanks to a $911.4 million contract for the helos, as well as parts and munitions, signed at BIAS 2018. The Vipers will have in-country pilot and maintainer training and aircraft maintenance.

The US Marine Corps have been operating the AH-1Z Viper for a variety of missions including anti-air, anti-armor, support for armed troops, close air support and reconnaissance.

For Bahrain, Deslatte added that training is already taking place in-country, as the firm has delivered an in-house developed simulator. The bird has also seen operational use, participating in missions with the Bahraini air force. Beyond the ordered 12, however, Deslatte told Breaking Defense that there is no request yet to increase the number of airframes for Bahrain.

The RBAF Vipers are not equipped with Link 16, the military tactical data link network used by NATO and allies, but Deslatte stated that could be an option in the future, noting, “The US Marine Corps is integrating the Link 16 on the Zulus now, hence it is a potential future capability if Bahrain [becomes] interested in that type of capability.”

The Vipers’ coming out at the Bahraini air show coincided with a ceremony just days before for the delivery of the final AH-1Z to the US Marine Corps, completing the program of record at 189 helicopters.

“The first production lot of US Marine Corps H-1s was ordered in 1962, and they changed the way Marines fight today,” Deslatte said in a statement at the time. “Completing the AH-1Z and UH-1Y deliveries to the US Marine Corps adds one more chapter to the legacy of the H-1 platform.”

Back at the Bahrain air show, on the opposite side of the display area, two AH-1 Cobra helicopters were displayed and looked in good shape. RBAF has a total of 30 Cobra helos in its inventory. In 2015, Turkish Aerospace Industries (TAI) and Aselsan signed a $24 million deal with Bahrain to upgrade their AH1-P Cobra Attack helicopters.

According to the deal, TAI and Aselsan were expected to integrate the mission computer and some avionics from Turkey’s T129 Atak helicopter and equip the choppers with to Roketsan weapons.

Sun-Times: Beating Gun Companies In Court is Like Putting Al Capone in Jail…Or Something

I went through three bugout bags and reorganizing my hiking bugout bag.