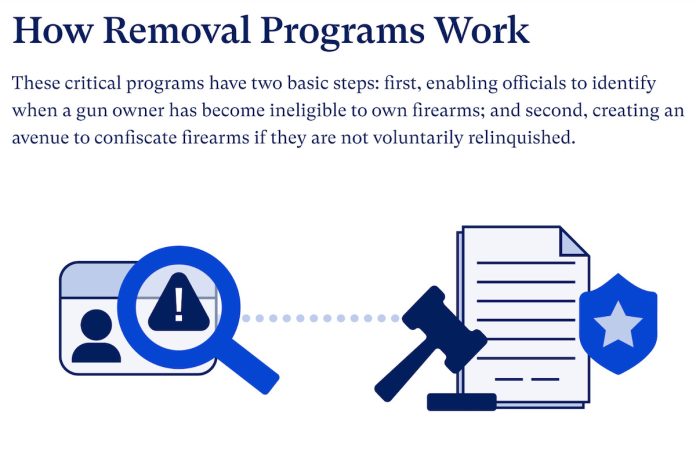 Everytown for Gun Safety is promoting the widespread adoption of state-run confiscation squads and universal gun registration in a new report, titled, “At the Forefront of Gun Safety: Removing Illegal Guns.“

The key findings of the Everytown report:

The goal is via universal gun registration authorities will have the capacity to seize firearms from individuals who have become prohibited persons, e.g. felons, fugitives from justice, mental defectives, domestic abusers, drug addicts, etc., over the course of each year.

Ostensibly, by sending out confiscation squads to disarm these newly prohibited persons, public safety will increase because fewer supposedly troubled and/or dangerous people will have access to firearms.

But as GunsAmerica previously reported in 2021, it doesn’t work as advertised. In fact, California’s “Armed and Prohibited Persons System” (APPS), which has been around for decades, has been an abject failure.

To quote from the article:

One agency told CalMatters that they gave up on confiscating firearms after one night of work, calling it “a waste of resources that could be directed toward more pressing violent crime problems.” Some people provided proof that their guns had been sold long ago, while others claimed they had gotten rid of them but could provide no evidence.

“There was just no way to verify,” one agent said, adding that the state “has no idea who has guns and who’s turned them in.”

Apart from the logistical nightmare it is to track down every single firearm a person may or may not still possess, the real issue is just because someone is a prohibited person, it doesn’t make them an imminent danger to the public.

But the idea that we should devote an untold number of gov’t personnel and innumerable tax dollars to ensure 100 percent compliance across the board is a fool’s errand.

Here’s why. To quote the good book, seek not the living amongst the dead!

The vast majority of violent crime is committed by a handful of ultra-dangerous suspects (who probably would never register a gun in the first place and, therefore, would not even be entered into the gun owner database).

Priority should be placed on disarming and imprisoning these individuals, not, for example, allowing the equivalent of a SWAT team to spend weeks tracking down a pot smoker with a felony weed possession conviction from 10 years ago who lives in a van near El Segundo and who may or may not still be in possession of a derringer he inherited from his father.

Point is, in a world of limited resources we have to distinguish the difference between an active threat to public safety and a nonviolent individual who shouldn’t have a gun because of a checkered past.

To explicate, a recent study from the National Institute for Criminal Justice Reform (NICJ) found that gun crimes in Washington, D.C. are committed by a “very tightly concentrated” group of individuals.

“This very small number of high-risk individuals are identifiable. Their violence is predictable and therefore it is preventable,” said the authors of the study.

“Overall, most victims and suspects with prior criminal offenses had been arrested about 11 times for about 13 different offenses by the time of the homicide,” the authors went on to observe.

By the numbers, they said, “At least 500 identifiable people annually drive 60-70 percent of the city’s shootings — and likely no more than 200 individuals at any given moment in time.”

Those 500 or so individuals are the ones law enforcement should target. And based on the D.C. arrest records in the NICJ study, it’s pretty clear police are doing just that.

The question then is how are these known criminals who have had multiple run-ins with law enforcement making it back out onto the streets (see chart below)?

Well, we know the answer, of course. Democratic policies implemented over the past few years have created a revolving door of justice.

Everything from appointing prosecutors who use kid gloves with violent offenders to calls to “defund the police” to cashless bail to decriminalizing retail theft has made it more difficult for law enforcement to keep the really bad guys behind bars.

Therefore, instead of pushing for robust gun removal programs, Everytown ought to be asking Left-leaning lawmakers to reverse their soft-on-crime policies. That would do a lot more to reduce gun deaths in our country than sending cops door-to-door to seize firearms from individuals who may be prohibited persons but do not have a known history of violence, e.g. those with medical marijuana cards.

Again, to be clear, not saying that prohibited persons shouldn’t be prosecuted if they’re caught possessing a firearm. Not at all. Just that the approach to confiscation should be handled with a scalpel and not an ax.

But the truth is Everytown wants to create a nationwide gun removal program that relies on universal registration. Because it wants to create a system where it’s possible to take guns from individuals who are willing to register their guns in the first place, that is the law-abiding ones.

Think about it. With such a system in place, the gov’t can quickly expand the program from prohibited persons to law-abiding citizens who are in possession of newly prohibited firearms and accessories.

Suppose, for a moment, that the Dems in Congress succeed in banning black rifles in the future. Is there any doubt that if they had this tool in their toolbox, they’d deploy confiscation squads to disarm those in possession of AR and AK-pattern rifles?

1000% they would! And that’s exactly what they’ll end up doing if we’re not careful.