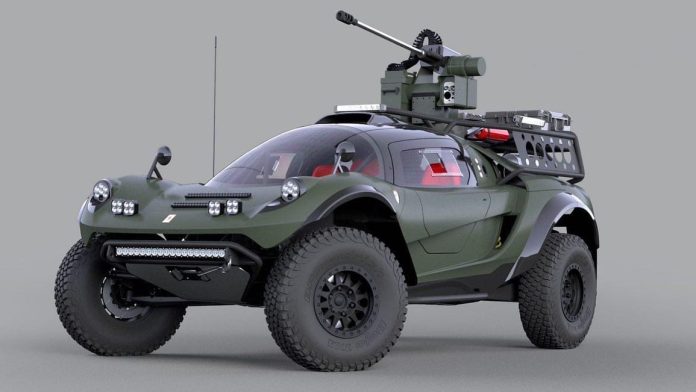 Posted 6 hours ago in Photo Of The Day with No Comments
Tags: Fast Response Military Vehicle, Glickenhaus 008, Scuderia Cameron Glickenhaus

There are very few vehicles that are worthy of being shown in TFB’s Photo Of The Day, but the Glickenhaus 008 Fast Response Military Vehicle certainly fits in very well. The vehicle is a concept by Scuderia Cameron Glickenhaus, based on the Glickenhaus 008 “Build your own racecar for the road”. The company is founded by James Glickenhaus, who is an American film producer (The Exterminator (1980)) and automotive entrepreneur.

We are proud to present Glickenhaus 008 Fast Response Military Vehicle which came out of discussions when we presented our Boot at the Equitus booth at AUSA Military, Fire, LEO versions of our Boot will follow. The Glickenhaus 008 Fast Response Military Vehicle: “We find the toughest races in the world— 24h Nürburgring, the Baja 1000— and design vehicles to compete in those challenges. Then we make road-legal versions. Some companies build cars. We build DREAMS.”

What do you think about the concept?

All images by Scuderia Cameron Glickenhaus, used with permission.

The Role of Antioxidants in Recovery

How Much Land Would You Need To Be Self-Sufficient?