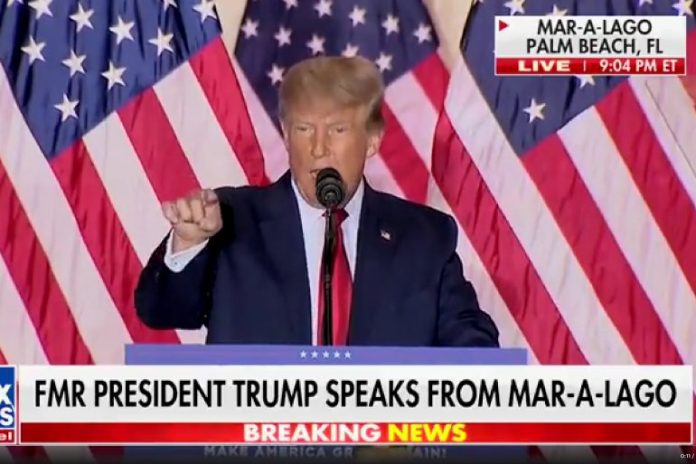 Ladies and gentlemen, love him or hate him, he’s back. Officially. On Tuesday evening, Donald Trump announced his run for a second term as President of the United States by saying, “America’s comeback starts right now.”

One of the most polarizing figures in American politics ever, Trump has a legion of supporters and almost as many people who hate him with a white-hot passion. His entry into the 2024 race for POTUS will likely keep some until-now marginally unprofitable news outlets afloat as they return to a virtually all-Trump, all the time format.

The Hill has more on the announcement . . .

Trump made the announcement during a much-anticipated event at Mar-a-Lago, his private estate and club in Palm Beach, Fla., just a week after a lackluster midterm election performance denied Republicans the “red wave” they had long anticipated and led to days of finger-pointing within the party.

Flanked by a dozen American flags in a gilded ballroom, Trump delivered a winding speech in which he boasted about — and often exaggerated — his record in the Oval Office and defended his party’s midterm performance, claiming that Republicans had “taken over Congress” and “fired Nancy Pelosi,” the Democratic speaker of the House.

Of other Republican midterm failures, Trump claimed that Americans had “not yet realized the full extent and gravity of the pain our nation is going through.”

“We always have known that this was not the end. It was only the beginning of our fight to rescue the American Dream,” Trump said. “In order to make America great and glorious again, I am tonight announcing my candidacy for president of the United States.”

Donald Trump certainly has a mixed record as far as gun rights are concerned. He showed little regard for due process, saying “confiscate the guns and go through due process second.” He also used the ATF to reclassify bump stocks as machine guns and effectively outlaw them following the Las Vegas shooting.

His Supreme Court and lower court nominations, however, unquestionably laid the groundwork for the landmark Bruen decision which will likely be the basis for overturning a range of unconstitutional restrictions on gun rights across the nation.

Whatever you think of him, the next two years are unlikely to be boring.

US approves $2 bn military loans and grants to Ukraine, neighbors