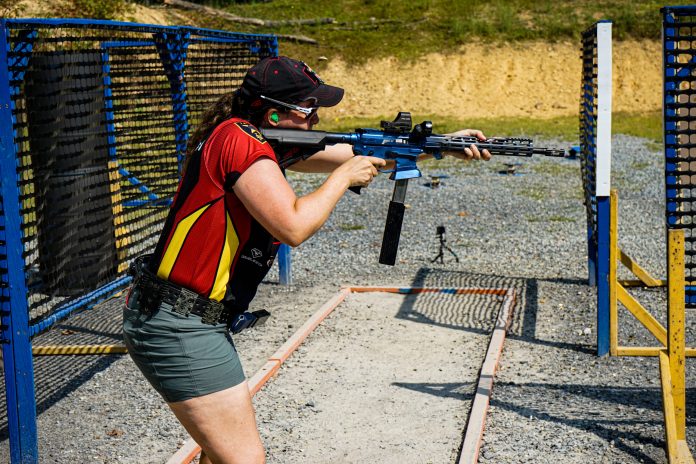 Competitive shooting sports in the U.S. include USPSA, Steel Challenge, 3 Gun, IDPA, GSSF, Sporting Clays, Trap, NRL22, PRS, and more. While anyone can compete in these types of shooting competitions, there is a small group of elite athletes at the top of each one. They can perform on demand, are consistent, and are dedicated to training. Just like anything else in life, to master something, you must put the time and work in to earn it.

This year, I spent a lot of time shooting USPSA matches, from the local Level 1 matches to Level 4 National matches. I shot in PCC (Pistol Caliber Carbine), Open, Carry Optics, and Limited divisions this year, but my main focus was PCC. I struggle to pick one division because I like to shoot everything and oftentimes get bored shooting the same gun all the time. Despite my switching divisions, my results at this year’s PCC Nationals spoke volumes about the work I put in this year compared to last year’s PCC Nationals.

Since the very first PCC Nationals in 2017, Max Leograndis has won the PCC National title every year. He has set the bar very high for PCC and continues to dominate in USPSA. My first time shooting PCC Nationals was in 2021, and it was a little bit of a trainwreck with major gun malfunctions, but I still shot poorly to add to the results.

This year, I went in much more prepared and made a massive improvement. In one year, I bumped from B to A class, shot almost 15% better than the previous year, shot 72% of the National Champion, Max Leongrandis, placed 10th in A class, and was 5th Lady in PCC. Being able to see the results of hard work is one of my favorite things in life. It makes it all worth it.

The following four items are what led to my growth in competitive shooting this year:

No one likes to dry fire, and if they say they do, they’re lying. It’s monotonous and nowhere near the level of fun of live fire training, but it is necessary to get better. In competitive shooting, you always fall back to your level of training at major matches. You can’t expect to do well at a major match if you haven’t practiced, whether that be dry fire or live fire. Something about the beep of the timer going off that clears the mind, and auto drive kicks in. Shooting skills are extremely perishable, and immediately you’ll find out what you need to work on.

There are a variety of PCC-specific drills you can work on at home that directly help when it comes time to perform at a match. Moving with a rifle is much different than with a pistol. Most all matches will have barriers such as walls, barrels, or even shoot houses, where you have to navigate a small space with a long gun without breaking any safety rules like pointing your muzzle past 180 degrees of the stage. Using a wall between doors, a lamp post, or some other vertical structure, you can practice moving your PCC from one side of the wall to the other.

Reloading any gun quickly without fumbling is not as easy as it looks or as simple as it sounds, especially when you’re racing against the clock. Reloading a pistol is an entirely different motion from reloading a PCC, with different magazine sizes in pouches set up in a non-pistol-friendly configuration. The best way to improve your reloading skills is to dry fire at home with empty magazines. Work on hitting the magazine release without taking the gun off your shoulder, grabbing a fresh magazine with your support hand, and seating it straight up through the mag well of the PCC.

The dry fire practice that paid off the most for me was using a dry fire swinging target to practice my timing on shooting a moving target. I was always afraid of moving targets and often had one miss or no hits on moving targets. Now, my misses are mostly on wide-open, close-range paper targets I don’t respect and almost never on the moving targets. Go figure. But all of this taught me that what I practice, I improve on, and dry fire can make a world of difference.

I have always believed in investing in myself, whether that was in starting my business, getting a certification, or buying books or a subscription to learn something new. There are a lot of firearms instructors in the country, but very few can teach competitive shooting and even fewer are competition shooters themselves. I invest time and money in lessons from the professionals who practice what they preach and have a proven track record in the sport I’m looking to improve.

One such shooter and instructor I took a class from this year is Mason Lane, a three-time National Champion. Mason constantly places top 5 or better in major USPSA competitions. Mason shoots iron sights and red dots in low-capacity (10-round mags) divisions and high-capacity (full magazines) divisions, making him a dynamic and well-rounded shooter.

Mason’s class allowed me to improve on my fundamentals, identify my weaknesses, and come up with a plan for drills to do at home after the class was over. Whether you’re just starting out in competitive shooting or have been competing for years, I highly recommend taking at least one class from an elite-level competitor each year.

In the game of USPSA, movement is everything. Explosive movement is what helps you get out of position. Entering a position requires you to slow your body down, stay low, and get your gun up before seeing the target you’re about to engage.

At the top of the scoreboard, the best shooters in their respective divisions are all within seconds, less than a second, and sometimes a tenth of a second, of each other. One bad draw, one overstep, or one misstep can cost the top-level shooters to lose a match. It doesn’t matter if you shoot a PCC or a pistol, you have to learn how to move. You need to know when to shoot on the move, when to throttle control to make difficult shots, and how to get the timing right to shoot moving targets. Your eyes should always lead you and your gun to the next target or where you want to go.

Consistency wins matches, not having a few stage wins and bombing the rest of the stages. I have seen competitive shooting matches won by a person without a single-stage win. Most new shooters don’t understand that consistently shooting the same percentage of points or percentage of each stage winner usually will lead you to the win. For example, I won my first match this past summer, and in the overall results (meaning against all divisions), I didn’t have a single stage win. It was my consistency that earned me the overall win.

What I love most about competitive shooting is seeing my growth over time. I like to look back and watch videos of my first matches compared to now to see how far I’ve come in such a short amount of time. The results are clear to see and validate that what I’ve been working on was worth it. I’m excited to see the next year of growth in my shooting performance.

US simulates bombing mission over Middle East amid Iran tensions

I took three of our yearling steers to the butcher, on the hoof.