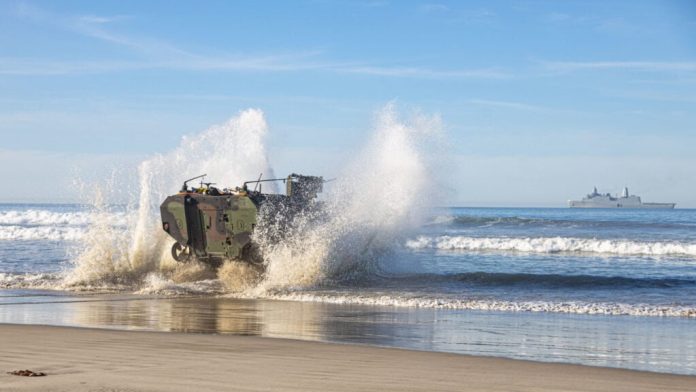 WASHINGTON — The Pentagon announced it was purchasing an additional 30 Amphibious Combat Vehicles (ACVs) for $153 million, bringing the cumulative value of the Marine Corps’ next-generation combat vehicle contract to more than $2 billion.

The new funding, which was announced Wednesday through the Defense Department’s daily contract announcements, comes following months of turmoil for the Marine Corps’ amphibious operations. The ACV and its predecessor, the Amphibious Assault Vehicle, have seen multiple operational pauses and restarts due to various training accidents over the past year.

The service last month announced it had distributed “interim guidance” for ACV waterborne operations following a training incident on Oct. 13 in which a vehicle rolled over in the surf zone. No one was hurt.

The service suspended ACV surf zone transit in response to that incident, which a Marine Corps spokesman today confirmed to Breaking Defense remains in effect.

“Additional testing with the ACV in the surf zone has been directed to better understand the upper end of the vehicle’s operating envelope. Until these limits are better understood, the interim guidance will remain in place,” the spokesman added.

Earlier this year, Navy Secretary Carlos Del Toro issued letters of censure to several officers deemed responsible for a particularly tragic event in 2020 in which a vehicle sank, killing eight Marines and a sailor. A command investigation found poor training and maintenance practices led the crew onboard to miss a problem in the vehicle’s transmission.

The Marine Corps’ goal for the program is to buy 632 Amphibious Combat Vehicles to replace the legacy fleet of Amphibious Assault Vehicles. The four planned variants will include a personnel variant, a command and control variant, a recovery variant and a 30-mm gun variant. The service has also tapped BAE Systems, which makes the ACV, to explore if the C4/UAS package being equipped on the ACV could be put on the Armored Reconnaissance Vehicle.

To date, the service has purchased roughly 260 ACVs in previous years and are expected to purchase 74 in fiscal 2023, including the 30 announced this week.