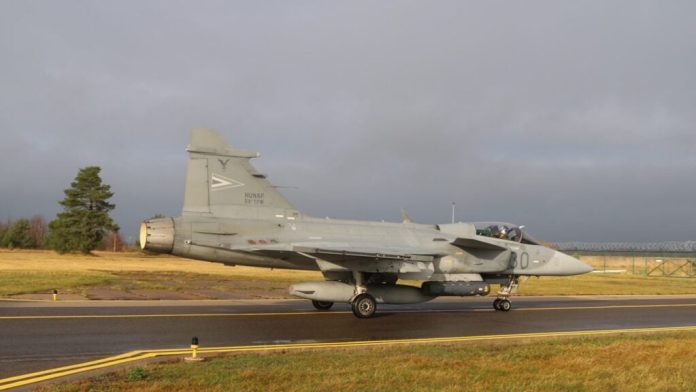 “In terms of behavior… I would say they [VKS] try to make our life harder but it’s not super aggressive,” said Maj. Jozsep Papp of the Hungarian Air Force’s “Puma” Tactical Fighter Squadron, during a Tuesday press briefing held at Siauliai Airbase, Lithuania. Hungary currently manages BAP, which focuses almost exclusively on scrambling and intercepting Russian aircraft over international airspace.

The scramble rate of Hungarian JAS 39 Gripen C fighter jets has not changed significantly since Russia’s invasion of Ukraine, according to Papp, but interceptions have included Russian Su-24, Su-27, Su-35s, MiG-31 combat jets, IL-20 airlifters, AN-26 and AN-72 transport aircraft.

BAP scrambles are ordered by NATO from Siauliai should Russian aircraft breach an eight nautical mile buffer zone in the Baltics, not share a flight plan, fail to communicate with air traffic control by radio or turn off  transponders. 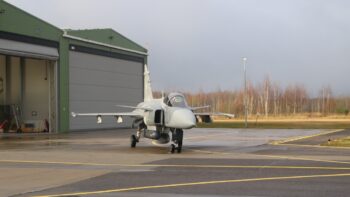 A Hungarian Gripen sits at a NATO airbase in Lithuania. (Tim Martin/Breaking Defense)

Alongside Hungarian Gripens, Polish F-16s are currently on base to support the BAP mission with German Eurofighter Typhoons at Amari Air Base in north western Estonia also complimenting air policing deployments across the region. Under NATO requirements, the BAP lead nation must use two unarmed fighters for deployments and reserve two others equipped with weapons for back up.

The Hungarian Air Force will handover leadership of the BAP rotation to Poland at the end of November, after succeeding Spain in August. Since then it has completed 79 scrambles and amassed 275 flight hours with four Gripen jets, including air-to-air and air-to-ground training flights. Budapest’s other BAP detachments occurred in 2019 and 2015.

Plans are also underway to modernize Hungarian Air Force capabilities after the Hungarian and Swedish governments concluded negotiations for the former’s Gripen fleet (14 aircraft in all) to be upgraded to the MS20 Block 2 standard in January 2022. Breaking Defense accepted travel and accommodation to Siauliai for the event from Saab, which makes the Gripen.

RELATED: Made to take on Russia, Swedish Gripen fighter jets should go to Ukraine, report says

An agreement with Embraer for production of two KC-390 tactical transport aircraft will also improve air-to-air refueling. A first delivery to Budapest is expected in 2023.

Despite Hungary’s procurement efforts looked at as a sign of its air force becoming increasingly more robust and contribution to the Baltics regarded as critical to European security, it has courted controversy under Prime Minister Viktor Orbán’s leadership by blocking a European Commission $18.7 billion support package for Ukraine in an alleged attempt to put pressure on the European Union to release $13.5 billion of funding for Hungary. The latter funds are reportedly set to be suspended next month because of concern over Budapest not following democratic processes correctly.

Orbán also lost trust with Ukraine after refusing to allow Hungarian arms to be transferred to Kyiv following Russia’s illegal invasion, while his close ties with Moscow and nationalist rhetoric have long irritated NATO members.

Turkey and Hungary were the only two countries in NATO to oppose Finland and Sweden’s applications to join the alliance, but their stances both look to have softened recently.

“I think the average Hungarian person would be quite proud of what we are doing in Lithuania,” said Papp.