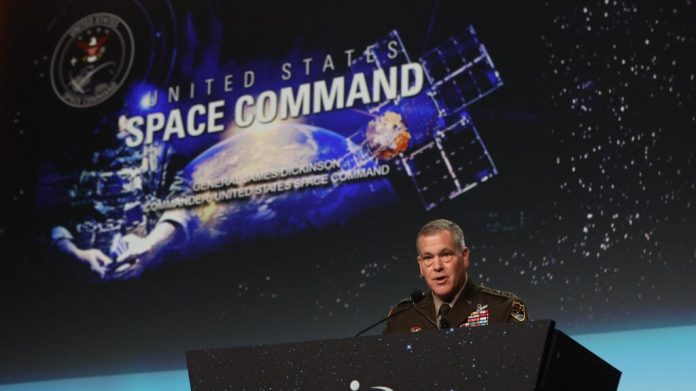 WASHINGTON — Space Command has announced a restructuring designed to streamline its unwieldly command structure to allow more rapid decision-making — a move presaged in an early draft signed off last year by SPACECOM Commander Gen. Jim Dickinson and first reported on by Breaking Defense.

“To outpace our strategic competitor, the People’s Republic of China, I am rapidly building the command to compete and win in the space domain, deter aggression from extending to space, and, when necessary, prevail in conflict,” said Dickinson in a SPACECOM statement. “The alignment of task forces and operational centers under one commander will provide USSPACECOM a command-and-control structure that enables rapid action to deliver agile and responsive space effects in support of integrated deterrence.”

The JTF-SD, headquartered at Schriever SFB in Colorado, is responsible for protecting and defending US space assets, including coordinating with the Intelligence Community through the National Space Defense Center. The CFSCC, headquartered at Vandenberg SFB in California, takes care of all the day-to-day space support functions for military operators, such as managing access to comms and operating GPS satellites. It is called a “combined force” command because it includes allied representatives.

Those two components will each retain their current mission sets but will report up to the new CJTF-SO. The CJTF-SO will be headed by by Army Maj. Gen. Tommy Jameson an acting basis until a permanent 3-star commander is nominated and confirmed.

The new unified structure in some ways goes back to the future for how the US military manages its space support and warfighting responsibilities. In 2017, prior to the creation of SPACECOM, Air Force Gen. John Hyten, who was then head of Strategic Command (STRATCOM) created a similar unified command, called the Joint Force Space Component Command, to consolidate milspace operations.

In essence, the new CJFT-SO will serve as the central hub for SPACECOM’s missions as defined in the January 2021 revision of the Unified Command Plan (UCP):

“The standup of CJTF-SO allows us to operate at the speed of conflict, while providing USSPACECOM the flexibility to focus on supported and supporting requirements,” said James. “CJTF-SO will serve at the operational level of command as the space functional component to USSPACECOM, with tactical control of presented space forces.”

James stepped down as head of the JTF-SD on Nov. 4, replaced by Space Force Brig. Gen. Dennis Bythewood. Space Force Maj. Gen. Douglas Schiess in August took over as head of CFSCC from Maj. Gen. DeAnna Burt, who was nominated to be deputy chief of space operations for operations, cyber and nuclear — a post that was previously held by new Space Force chief Gen. Chance Saltzman.

The M500 12 Gauge Shotgun in Afghanistan -The Firearm Blog