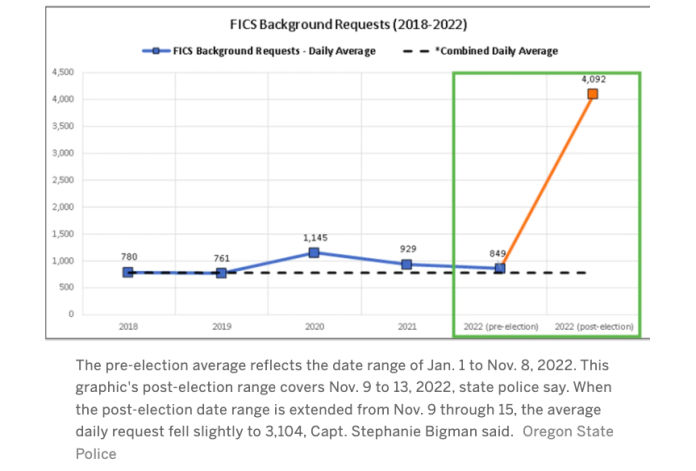 Measure 114 opponents fear the measure will increase the background check backlog and cause unnecessary delays for people who can legally buy a gun and want to protect themselves.

State police are “hopelessly under gunned, pardon the phrase,” said Tim Barnes, a federal firearms licensed dealer who owns the Tigard Pawn 4 More shop. “They don’t have the staff or the equipment.”

Trudi Lacasse, a representative of The Gun Room in Southeast Portland, said interested gun buyers, including people with concealed handgun licenses, are finding the state police “queue is very high” to get a completed background check.

They’re having to wait a couple of weeks, she said. But nobody leaves her shop with a gun until they’re approved through a completed background check, she added.

Barnes spoke to The Oregonian/OregonLive this week as he was processing a prospective gun buyer at his pawn shop and telling the customer, who has a concealed handgun license, that he was No. 2,182 in line on the state police list for a firearms background check.

“It’s like if you’re waiting to see a Led Zeppelin concert, to get in to see him you’ve got to get through the door,” Barnes said. “This guy is the 2,182nd person in line stretching out into the parking lot before he gets to the door, before he gets looked at by state police and processed.”