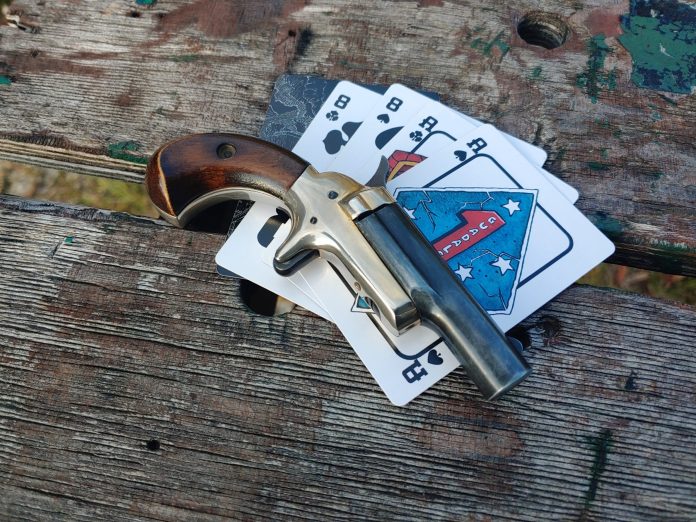 I think a lot of us appreciate rimfire variants of our favorite guns. The HK MP5, the Walther PPQ, the SIG P322, and the GLOCK 44, among others, give us a cheaper way to fire a gun and train with something that’s similar to guns that are a bit bigger and more expensive.

This is hardly new. Colt may have done it first back in 1959 with the Colt Fourth Model Derringer. Colt’s first cartridge guns were the Thuer-designed second and third-model derringers chambered in .41 Rimfire, but production stopped in 1912 for these guns.

From the late 1940s into the 1970s, there was a massive surge in the popularity of western films. This surge inspired a new generation of gun enthusiasts, and their weapons of choice were cowboy guns.

To capitalize on the surge of western popularity, Colt brought back the Thuer design as a Fourth Model derringer. At that point, .41 Rimfire wasn’t exactly flying off the shelves, so Colt chose to chamber the Fourth model in .22 Short.

When you picture derringers, you probably picture twin barrel guns popularized by Remington. Those might have been the trendsetters, but most derringers from this period were tiny single-shot firearms. The Colt Fourth Model derringers are single-barrel guns. I recently acquired one of these mini Colts and have been having way too much fun with it.

A Colt by Butler?

Colt actually didn’t make these pistols. Their name may grace the top of the barrels, and they were made in New Haven, Connecticut, but they weren’t true Colts. A company called Butler produced the guns for Colt. Butler would later go on to produce these revolvers under their own name after Colt stopped offering them.

The Colt Fourth Model Derringers weren’t exactly of the same quality as the older Third Models. They were made from nickel or gold-plated Zamak, which is a zinc alloy commonly used in very cheap firearms. Luckily, it shoots .22 Short, so it doesn’t need to be super strong.

The grips were made from either walnut or from a plastic-like fake pearl or ivory design. They still looked like the Colt derringers, but they were made to be cheaper.

I prefer the gold sides with a black Du-Lite finish, a black barrel, and walnut grips. The fake silver and ivory look just isn’t for me. Sometimes they were sold as pairs and even in fours with sequential serial numbers in fancy jewelry boxes. These made great displays that were also functional and capable.

Single guns sold for $22.50 for the basic models, and prices varied for the numerous special editions, pairs, and more. The first series was made from 1959 to 1963, and over 110,000 guns were produced. A second series ran from 1970 to 1973, with 25,000 more produced. This example was made in the second series according to the D suffix at the end of the serial number.

These Colt Fourth Model Derringers are designed to mimic the Thuer-designed models. Loading requires the gun to be half-cocked, then the barrel pivots sideways to open the chamber. Load your single little .22 Short cartridge and pivot the barrel back in place. To fire the weapon, you fully cock the hammer and pull the small spur of a trigger.

It’s simple but fun and easy to shoot. Recoil from a .22 Short isn’t much, and you don’t need much of a grip to control it, which is great because you there isn’t much to grip on the little derringer.

These teeny birds head grips provide enough to keep the gun in your hand and not much more. In fact, the highly optimistic front sight on the Colt Fourth Model Derringer is often blocked by the top of your hand.

As you’d imagine, accuracy isn’t much to brag about. I can hit the chest of an IPSC target at 10 yards pretty easily. In fact, I went as far back as 15 yards, and I still remained fairly consistent at hitting the target. I learned to aim low to hit near where I wanted. The Colt Fourth Model derringer is also very reliable for a rimfire. I went through a fifty-round box of Armscor .22 Short with a single failure to fire.

While it’s not very accurate and kind of silly overall, the Colt Fourth Model Derringer is a ton of fun to shoot. It barely moves between shots and the report is fairly quiet and, honestly, more accurate than I expected it to be. I doubt I’ll ever shoot a .41 Rimfire true Thuer Colt, but this is close enough to provide lots of entertainment.

I’ve always thought derringers were cool, and admittedly the Remington-type two barrels were my favorites. Still, I’m growing quite fond of the Colt Fourth Model Derringer. It has half the firepower, but twice the style. I’d prefer a .22LR model, but .22 Short doesn’t seem to be too tough to find.