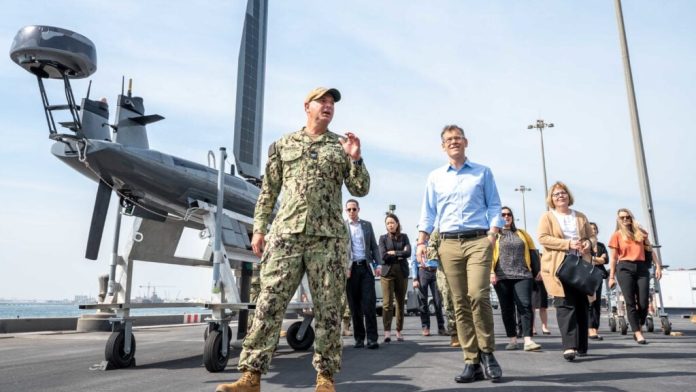 WASHINGTON — In a keynote speech today in Bahrain, the Pentagon’s top policy official argued that Gulf nations should be cutting ties with Russia over Moscow’s deepening military relationship with Iran.

In prepared remarks Colin Kahl, undersecretary of defense for policy, told the audience at the annual Manama Dialogue that Russia’s decision to buy military drones from Iran for the ongoing war in Ukraine will have blowback in the region, where Iranian drone strikes are among the biggest security concerns shared by Saudi Arabia, the United Arab Emirates, Israel and others.

“Now, even as Russia employs Iranian drones to rain down on Ukrainian cities, some in this region believe that engagement with Putin can drive a wedge between Moscow and Tehran,” Kahl said. “But this approach did not deliver in Syria when Russia and Iran doubled down in support of a brutal dictator in Damascus, and it is even more unlikely to work now given Russia’s reliance on Iranian weapons for its war in Ukraine.

“Indeed, a declining and isolated Russia is not only more firmly in Tehran’s camp but is more likely to find common cause with China and North Korea in pursuit of policies that challenge the norms and rules that benefit every citizen, government, company and non-government organization in this room and across the globe,” Kahl warned.

RELATED: What Iran stands to gain from helping Russia in Ukraine

Kahl’s comments in such a venue seemed a lightly-veiled shot at regional leaders — most notably Saudi Arabia — who have helped prop Moscow up in the face of sanctions put in place by Western nations in the wake of the February invasion of Ukraine. Even the decision by some states to stay neutral in global bodies like the UN when it comes to Russia, such as a February statement from a top UAE diplomat that “taking sides will only lead to more violence,”  is seen as a problem in the West, which needs both economic and political pressure on Moscow to stay strong going forward.

Kahl’s comments also included a pitch for why the Gulf nations should work with the US over China, on the basis that the PRC may make enticing offers, but that they come with the “intent” to “fundamentally reshape the rules-based international order.”

“In the Middle East, the PRC has no interest in mutually beneficial coalitions, and Beijing has neither the intent nor the capability to integrate the region’s security architecture,” he said. “The PRC pursues ties based on its narrow transactional, commercial, and geopolitical interests. Period.”

Once again, Kahl tried to tie a competitor to Iran, the regional boogeyman: “Meanwhile, Beijing’s narrative of ‘neutral’ engagement conveniently allows it to play both sides: It can attend red carpet regional summits in countries directly threatened by Iran while expanding ties to Tehran, all while bypassing meaningful investments in regional security or stability.”

How effective this argument will be, however, is unclear. Jonathan Lord, a regional expert with the Center for a New American Security, said that while Kahl’s speech was “well delivered,” but that “absent deeds, won’t be compelling to our Arab partners.”

“The Gulf is flirting with Moscow, Beijing, and others because they perceive it’s in their interest to do so,” said Lord, who before joining CNAS held a number of regional jobs for the Pentagon and led the Middle East portfolio for the House Armed Services Committee. “Until the Biden administration and Congress address the needs of Abu Dhabi and Riyadh through policymaking, we shouldn’t expect much to change.”

As to the specific attempts to curry favor in the region by arguing that Russian ties to Iran hurt the local states, Lord is also skeptical.

“It’s highly reductive,” he said. “OPEC nations are rentier states that first and foremost must capitalize themselves on the back of oil’s price per barrel. Any wealth that Iran accrues as a result of market conditions is both marginal, and a marginal factor in the calculus for these nations.”

Elsewhere in the speech, Kahl pushed for greater regional integration, building off recent military and political ties between Israel and the neighbors with whom it has historically been at odds — once again, driven by the Iranian threat.

“This administration believes that our collective security will benefit from a more integrated coalition of partners, synchronizing actions across political, economic, and security sectors, all within the framework of the rules-based international order,” he said.

“In short: the United States remains committed to using all instruments of our national power to further peace, promote stable economies, and deter aggression in this vital region, and around the world.”