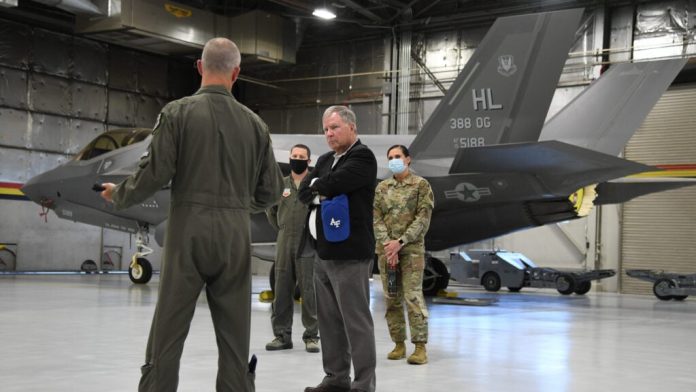 WASHINGTON — Rep. Doug Lamborn, the Colorado Republican who is expected to take over as chairman of the House strategic forces subcommittee next year, recently made clear that Space Force’s congressional overseers would continue their long-standing focus on space acquisition reform.

However, he also signaled a slightly harder line on the nuclear weapons issues for which the subcommittee also is responsible — for example, citing his “disagreement” with the Biden administration’s cancellation of the the Navy’s nuclear Sea-Launched Cruise Missile (SLCM-N) program.

During a conference sponsored by Politico Wednesday, Lamborn said that with regard to space, he is “focusing on acquisition; we have to be faster and leaner.”

He further echoed the conventional wisdom within Congress, and more recently within the Space Force, that the military space architecture needs to move away from its current structure based on small numbers of large, highly capable satellites towards a more resilient one comprising large numbers of smaller satellites dispersed across various orbital regimes.

“Instead of the exquisite and expensive but vulnerable, huge satellites that do a lot of functions very exquisitely, we have to have, let’s say a constellation — a disaggregated array of smaller satellites that can do the same thing, but can be easily replaced if some of them are taken out in a conflict,” he said.

Lamborn noted that the shift in force design for military space should, in itself, help spur speedier acquisition and at the same time lower the enormous costs associated with current satellite systems. (For instance, the five Next Generation Overhead Persistent Infrared system missile warning satellites are projected by the Pentagon to require $12 billion in funds between fiscal 2023 and 2027.)

The need for changes in the sclerotic and byzantine space acquisition process was the primary driver behind congressional support for the creation of a Space Force — support led by Rep. Jim Cooper, D-Tenn., outgoing strategic forces subcommittee chair, and Rep. Mike Rogers, R-Ala., now expected to take the reins of the House Armed Services Committee.

Cooper — who is retiring this year after he said the Tennessee Republican Party successfully gerrymandered away his Nashville district — told Politico that “we’ve still got a lot of work to do” in fixing space acquisition, but the “Space Force is making progress.”

However, Cooper voiced some concern about the fact that the service still has three separate arms responsible for developing and fielding satellite systems: Space Systems Command, the Space Rapid Capabilities Office and, since October, the Space Development Agency.

“It worries me that we have to have three but I’d rather have redundancy than to have insufficiently fielded satellites,” Cooper said. He also voiced caution against an acquisition strategy that relies too heavily on what is currently available in the commercial market, rather than focusing on keeping military space technology at least a decade ahead.

“So, what we really want are technologies that are a decade or more ahead of the commercial sector,” he explained. “And that’s a very difficult thing to field today, because people are able to be billionaires if they go ahead and take it to market. Who’s going to forego the opportunity to be a billionaire with their invention?” 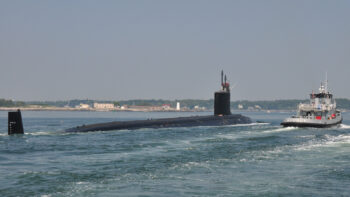 If funded, the Sea-Launched Cruise Missile-Nuclear would provide a low-yield nuclear weapon available for attack submarines like the USS Virginia, pictured here. (US Navy)

With regard to nuclear weapons, Cooper and Lamborn both expressed strong support for the Biden administration’s expansive, and expensive, nuclear modernization program, which in essence continues along the path originally outlined by President Barack Obama.

“We need to continue the modernization that was begun under Barack Obama. I applaud him for this,” Lamborn said. “It’s taking some money, but these weapons are aging — some of the components aren’t even replaceable anymore because they’re old and obsolete.”

Stressing that the goal is not to build new weapons but upgrade the current arsenal, Lamborn said the key is keeping US nuclear forces reliable.

“We have a nuclear umbrella that about 30 countries depend on us for, and so reliability is a big issue for everyone, not to mention potential adversaries. We have to have that deterrence factor based on the reliability of our nuclear enterprise,” he said.

At the same time, Lamborn chided the Biden administration for its plan, codified in the recently released Nuclear Posture Review, to cancel SLCM, citing its usefulness as a middle rung on the nuclear escalation ladder and thus aid in deterring nuclear-armed adversaries.

“I think that that is a mid-range capability that we should at least have in our toolbox. If you have an all-or-nothing approach, that can lead to awkward situations,” he said. “Having a mid-approach, like a smaller yield nuclear cruise missile from a submarine, at least tells an adversary, ‘Okay, there’s more doubt about me getting what I want.’”

Lamborn said that he expects the ongoing House and Senate negotiations on the 2023 National Defense Authorization Act to end up with some research and development funds being authorized for the SLCM-N, but with a bar on spending towards making it operational.

The House Armed Services Committee’s version of the NDAA would give the Navy $45 million for the effort; their Senate counterparts slated $25 million.