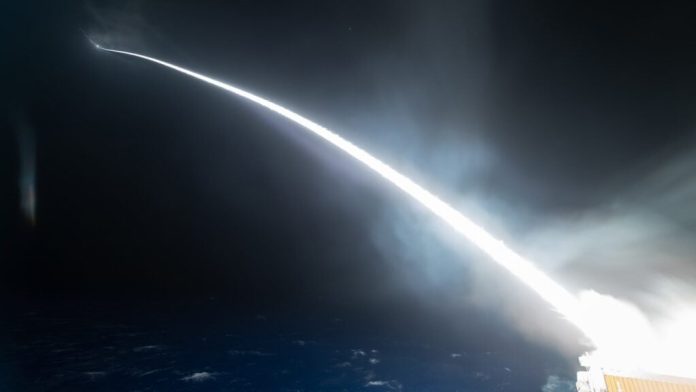 A photo of the C-Dome system being live fired. (Israeli MoD)

TEL AVIV — Just days after an Iranian drone hit an oil tanker off the coast of Oman, the Israeli Navy and industrial partner Rafael have announced the success of an advanced interception test of a new naval variant of the Iron Dome system.

The C-Dome, as it is known, is designed to go on ships and provide the same protection from rockets, missiles and small drones that Iron Dome does on land.

According to an Israeli Ministry of Defense announcement Thursday morning, the system was installed on the INS “Oz” corvette. Per the statement, “The test simulated real threats and included the system’s successful detection and interception of targets in challenging scenarios.”

Moshe Patel, the head Israel’s missile defense effort, said that C-Dome “promotes further operational flexibility and has become a part of the State of Israel’s multi-tiered missile and air defense array.” It will fit into the existing tiers of Israel’s air defense network, made up of Iron Dome, David’s Sling, Arrow 2, and Arrow 3.

The timing of the announcement coming so soon after the Iranian UAV attack was coincidental, but underscores the reason Israel began investment in C-Dome in the first place.

The attack by an armed UAV, probably the Shaed-136, occurred Tuesday against the Pacific Zircon tanker near Oman. In a statement to Reuters, the company (based in Singapore but controlled by Israeli businessman Idan Ofer) stated that the vessel “was hit by a projectile … There is some minor damage to the vessel’s hull but no spillage of cargo or water ingress.”

In July 2021, Iran targeted the Mercer Street oil tanker with drones. One drone slammed into the bridge of the ship, killing two members of the crew. Israel has been anticipating more such attacks, hence the investment in systems like C-Dome.

On Tuesday, US Navy’s Fifth Fleet said that it found over 70 tons of ammonium perchlorate on the vessel. This chemical is generally used to make rocket and missile fuel, as well as explosives.

“This was a massive amount of explosive material, enough to fuel more than a dozen medium-range ballistic missiles depending on the size,” said Vice Admiral Brad Cooper, commander of US Naval Forces Central Command, US 5th Fleet and Combined Maritime Forces.

While the Israeli navy is present in the area, Israeli defense sources said on Nov. 17 that they would like to see the US Fifth Fleet be more active in deterring Iran from repeating such attacks. Ideally, sources said, this would include more frequent patrols with more sensors in the area, and a more active posture towards intercepting Iranian drones when they are detected.

Giora Eiland, the former director of Israel’s National Security Council and former head of the Planning Department of the Israel Defense Forces, told Breaking Defense that unless Iran sees deterrent actions after such a strike, Tehran will be emboldened to try again.

“Such types of attack [start] on a low scale, but without an immediate counter action, the scale will grow very fast,” Eiland said. He added that the American statement identifying Iran as the perpetrators of the attacks is worthless without direct activity behind it.

“Lack of real action is a settlement, and the Iranians have good ears,” he said. “The Fifth Fleet should take more active action, otherwise things will deteriorate.”

As the Iranians lack a true navy, Eliezer Marom, a former commander of the Israeli Navy, recently told Breaking Defense that Iran has turned to “Maritime Guerilla” activity, deploying explosive boats and armed drones to attack American and Israeli targets. The Iranians may be able to strike certain targets thanks to the open fire orders in both navies, which are based on the positive identification of a danger, but they are still quite intermittent.

Marom noted that it is simple for the Iranians to conceal their activity until they are close to a prospective target in the two very popular maritime channels, the Gulf and Red Sea.

The first drone division of the Iranian navy has recently begun operations in the Indian Ocean, according to recent announcements.