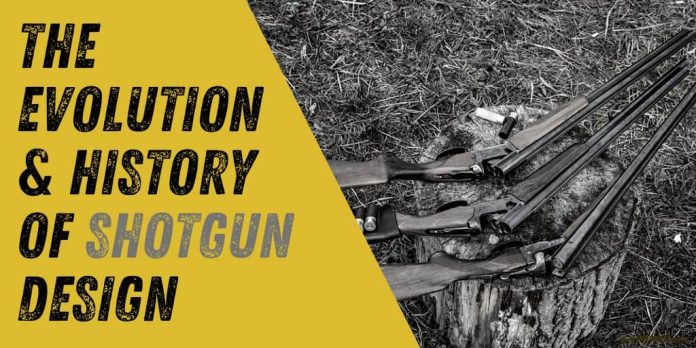 This post may contain affiliate links. Buying something through these links doesn’t cost you anything and helps support Know Prepare Survive. For some light reading, check out our affiliate disclosure.

In the gun trade, it is often said that there is nothing new.

In theory, this is true as the concept of a gun firing is virtually the same as it was when the idea was very first thought of. Limitations in manufacturing prevented many well-thought-out ideas from coming to light.

However, as styles of shooting continue to evolve and change so too does shotgun design and over the years shotguns have evolved to become what we know today1.

A long time ago, someone decided to fill a tube with gunpowder, put something solid on top, light the paper, and fire.

Starting the firearm revolution, shotguns have come a long way since their humble beginnings. On their journey, certain key components have impacted the evolution of shotguns more than others.

These essential developments in shotgun design have led to the modern shotgun that most shooters are familiar with in the modern age.

Let’s take a look at some of the biggest influences on shotgun design that have helped to determine the evolution of the shotgun over time.

There are records of Chinese Alchemists making reference to a power that would “fly and dance” in 142 AD2.

The powder was said to be made of three different substances, likely the basic ingredients of gunpowder, saltpetre, charcoal and sulphur.

Used for many years for entertainment purposes or as a diversion, gunpowder was eventually realized for its weaponry potential.

The ‘fire lance’, a bamboo pole loaded with gun powder that propelled a flame at oncoming enemy soldiers, was the first recorded gun3.

Related: What is CCW Insurance?

While the trigger is often seen as a simple element of any weapon used to set off the gunpowder charge, it is in fact much more important.

Without a trigger, it is not possible to aim a firearm, as you would have to manually light a slow-burning fuse while trying to position the weapon.

Triggers began as basic mechanisms that would lower a smouldering fuse into position to light the powder.

However, spring-loaded mechanisms were soon introduced, evolving into the fire-pin and primer combination used in modern shotguns.

Flint and steel were the go-to means of firing a weapon until fulminate of mercury was discovered.

This volatile substance would ignite when it was struck with force, changing how a weapon could be fired.

This system was patented in 1807, giving birth to the percussion principle.

This system underwent many transformations over the years, resulting in the percussion cap, a small copper hat with a detonating charge insider it, being developed. This was placed over a nipple and fired by a hammer.

Established in the 1820s, this was a major turning point in shotgun design, allowing for the creation of the all-in-one cartridge that we have today and the capacity to have a breech-loading shotgun design.

Muzzle-loading shotguns had many limitations as they were slow and cumbersome to reload.

In 1851, however, Frenchman Lefaucheux unveiled a new firearm design that would revolutionize shotgun design forever.

Featuring hinged barrels, a complete shot, including gunpowder and an igniting gel, could be loaded at the breech end of the weapon.

It was fired with a hammer that struck a pin which protruded from the cartridge5.

The design was developed further and by 1871, the first hammerless gun was born, resulting in the base for the modern-day shotgun.

Related: Do You Need CCW Insurance?

The Future Of Shotgun Design

As technology continues to improve, manufacturing processes develop, and our knowledge of the science behind guns and shooting increases, the future looks exciting for shotguns.

New materials and technologies could improve the shooting experience going forward, allowing for the development of guns that are easier to handle, operate, and shoot with increased accuracy.

Shotgun design will no doubt continue to evolve and it’s exciting to think what the future might hold.

DIY Bunker: Turning Your Basement Into a Survival Shelter

Is This a Good US Army Rifle?