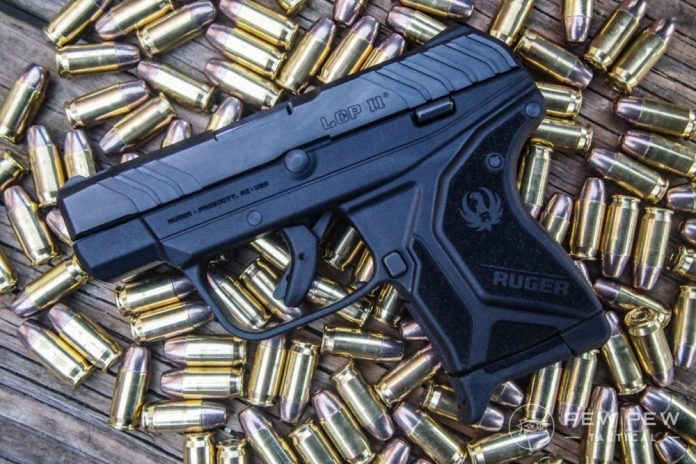 For many years the .380 ACP wasn’t a hugely popular cartridge for concealed carry or home defense, but times are a-changing.

Have one and need to know what to feed it? Let’s take a look at some of my favorite ammunition choices and break down the important facts of ammo selection.

The problem with this is that with so many types of .380 ACP ammo on the market, how do you know which is the best defensive ammunition for you?

We’ve got you covered!

How to Choose Defensive Ammo

Here are the most important factors to consider when choosing .380 defensive ammunition.

Penetration refers to the ability of a projectile to travel through the body, determined by its composition, weight, velocity, and projectile type.

A lead projectile will often bend, break and deform before penetrating deep enough to cause serious harm. The same goes for a round that is too light and too slow.

The expansion of projectiles is critical for blood loss and even pain compliance.

The larger a round can expand, the more damage it will do.

When researching expansion for a certain load, know that bigger is always better, but expansion comes second to penetration.

If possible, find how the round expands through ballistic gel after being shot through denim. Denim can cause some rounds to fail at proper expansion.

Reliability refers to the round’s ability to expand and penetrate…reliably.

During research, if you see tests where only three out of five rounds penetrate at least 12-inches or fail to expand…that brand might be so reliable.

The reliability factor also applies to the round’s ability to consistently ignite and fire.

Most defensive ammo is high quality and you’re unlikely to find an established company producing ammo that doesn’t go boom. But stuff happens.

One of the biggest factors that determine how a round will penetrate and expand is the type of projectile.

The classic bonded jacketed hollow point ammunition has long been a solid performer in both penetration and expansion.

Stay away from FMJ rounds since they do penetrate, but often penetrate way too much. I also advise staying away from gimmick projectiles that look cool but function poorly.

A projectile’s ability to retain weight after expansion and penetration is a good measure of the round’s ability to deal damage to a vital part of the body.

The more weight retention, the better.

Bullets are measured in grains, so when researching ammunition, look at what the projectile weighs before and after the test.

Most .380 ACP handguns are what we call pocket pistols — very small with short barrels. Commonly, these pocket pistols will have a barrel under 3-inches.

This affects the velocity of a projectile, as does the projectile’s weight.

When searching for the best .380 defensive ammo, you need to find a compromise between barrel length, projectile weight, and the round’s velocity.

For a pocket pistol, a 90-grain projectile seems to be the heaviest round that penetrates deep enough to strike something critical. These rounds also meet a high enough velocity to expand.

Lighter 77-grain and even 50-grain rounds are fast but often fail to penetrate.

Heavier 102-grain rounds are better suited for handguns with barrels longer than 3.5-inches like the Beretta Cheetah and CZ 83.

Best .380 Ammo for Self Defense

While I won’t name one brand to rule them all, I can make some suggestions based on my personal research into an effective round for my Sig Sauer P238.

For reference, this weapon sports a 2.7-inch barrel.

This projectile is really the key to this ammunition’s success.

It offers controlled expansion to allow the round to expand gradually as it travels through the body. This ammo isn’t too expensive and is pretty common.

What’s your take on Hornady’s defensive .380 round? Rate it below!

I’m not going to lie…the biggest reason I was attracted to the HTP loads was the price.

These High Terminal Performance loads come in boxes of 50 and are priced pretty competitively.

The round is a solid performer that penetrates and even expands to an impressive degree.

Testing done by Chris Baker at Lucky Gunner has shown this round to be incredibly effective in both penetration and expansion.

The round has no issue reaching that 12-inch mark and also expands up to half an inch in size.

If you are recoil sensitive, then the Liberty Defense 50-grain rounds are a good choice.

So, if you struggle with the recoil from a traditional round, these bad boys are better than nothing.

Prvi Partizan makes a huge range of ammo, and much of it is odd calibers or calibers that just aren’t in production anymore.

That is how I first started using them with their .303 Brit ammo. Since then, I’ve come to know and respect many of their calibers, and they have become one of my go-to picks for range ammo.

I’ve never had a problem with Fiocchi; every round has gone bang as it should. However, it’s some of the dirtiest ammo I’ve used.

After 200 rounds of their 9mm, my slide starts to stick. After 300, I need to clean it if I want to keep things running smoothly.

It is still one of the main brands I use for range ammo.

If you are looking for reliable ammo that runs relatively clean, PMC Bronze is a great option.

In the current market, PMC ammo has been fairly available while remaining competitively priced.

This is great for those who are looking to plink with solid ammo at a solid price.

Another favorite of the PPT team for range use is Sellier & Bellot.

It’s not built for self-defense purposes, obviously, since it’s FMJ…

But it works well when you want to get some training done at the range.

The Goal of Defensive Ammo

Defensive ammunition is purpose-built. As a civilian concealed carrier or home defender, your goal in any defensive situation is to end the threat.

So, your ammunition should match that goal.

Bullets stop threats in a number of ways.

The first and most unreliable is fear. It relies on criminals thinking, “he has a gun and he can shoot me.” It doesn’t matter what kind of bullet it is since the very thought of the bullet is enough to end the threat.

Next, we have pain compliance. Pain is subjective to the person being shot. Pain tolerance, the location of the gunshot wound, and the presence of drugs and alcohol in the body all factor into this compliance.

Blood loss can also be an effective means to stop an attacker, depending on where the bullet is placed and the size of the projectile.

Now, when I say the projectile size, I don’t mean the size of the actual bullet before it’s fired. The difference between a .380 ACP and 40 S&W is literally a millimeter in projectile size.

In this case, the projectile size that matters is the size of the round after it expands in the body. Blood loss can take several seconds to several minutes, so it’s not the quickest means to end a threat.

Lastly, trauma to the central nervous system will typically result in the death of an attacker, as well as near-instant incapacitation. This kind of trauma requires a shot to or near the spine, brain, and/or brain stem.

Remember that just because this is the most effective means of stopping an attacker does not mean it is always appropriate or legal to use this level of force.

Make sure you know your state’s laws regarding self-defense.

The round you choose must be able to accomplish these tasks to incapacitate an attacker. A .380 ACP is a lower-powered round, so ammunition selection is even more critical.

There are a lot of myths and legends regarding pistol ammunition.

People who believe these myths will often use them to discourage the use of .380 ACP and even 9mm.

To help you sort through the mess, let’s go over the biggest two myths.

The stopping power myth is so widespread that it has seeped into gun culture. I cringe when I hear someone bring up stopping power because there’s simply no such thing.

The ability of a round to stop an opponent hinges on the shooter’s ability to strike a vital portion of the body and for the round to penetrate deep enough to hit something to incapacitate.

Shot placement and penetration are the keys to stopping an attacker.

Hydrostatic shock is a thing, but it’s not something that really occurs with handguns. To achieve hydrostatic shock damage, a projectile has to move at over 2,000 feet per second.

The .380 round is one some choose for self-defense or just for some fun on the range. Regardless of what you use it for, the right ammo will only help you reach your goals.

We’ve listed out some of our favorite .380 ammo brands to get you started and hopefully set you down the right path.

What’s your favorite .380 ammo brand? Tell us in the comments below. Don’t have one yet? Check out our article on the Best .380 Pistols: Pocket Rockets for some recommendations.