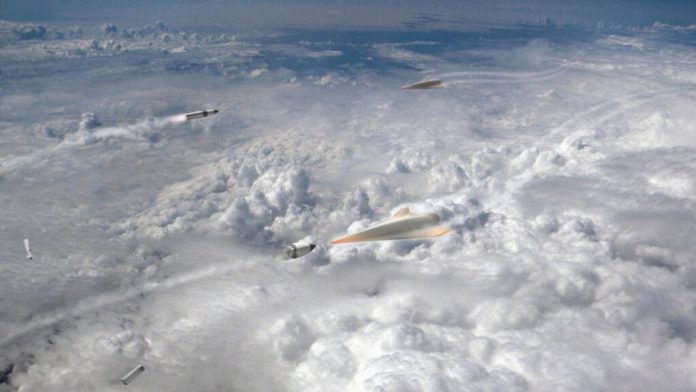 Over the last two years DARPA and the teams of Raytheon/Northrop Grumman and Lockheed Martin successfully completed a pair of flight tests of the scramjet-powered Hypersonic Air-breathing Weapon Concept (HAWC). The hypersonic missile flew faster, higher, and farther than its predecessor hypersonic concepts — NASA’s X-43 and the X-51 scramjet-waverider from the Air Force Research Laboratory.

At the same time, DARPA is working the defensive side of the equation with Glide Breaker. Its goal is to research a highly maneuverable kill vehicle to intercept hypersonic weapons during their glide phase.

Breaking Defense: What is the threat scenario today as it relates to hypersonics and why we need to develop an offensive capability to counter what near peers are doing?

Knoedler: Our adversaries are advancing their capabilities in terms of being able to keep us away from their critical military assets. [At the same time], we are always on a continuing path to build weapons that are going to take advantage of what we think are some of their vulnerabilities.

Hypersonics add speed and higher altitudes than our current cruise missiles. We need to make sure that we have the right mix of weapons systems to keep our adversaries always guessing about what’s coming at them, and we need to counter the systems that they have to achieve our objectives.

Breaking Defense: What is it about air-breathing hypersonics that can take advantage of vulnerabilities that we’re seeing in our near-peer adversaries?

Knoedler: We don’t have weapons that are flying greater than Mach 5 right now, so that changes how they would have to operate their air defense systems. If they’re looking for [missiles] that are going lower and slower, it’s not so easy for them to change and start looking for things higher and faster. [That means] they’ve got to be very deliberate about how they’re going to set up their defense. 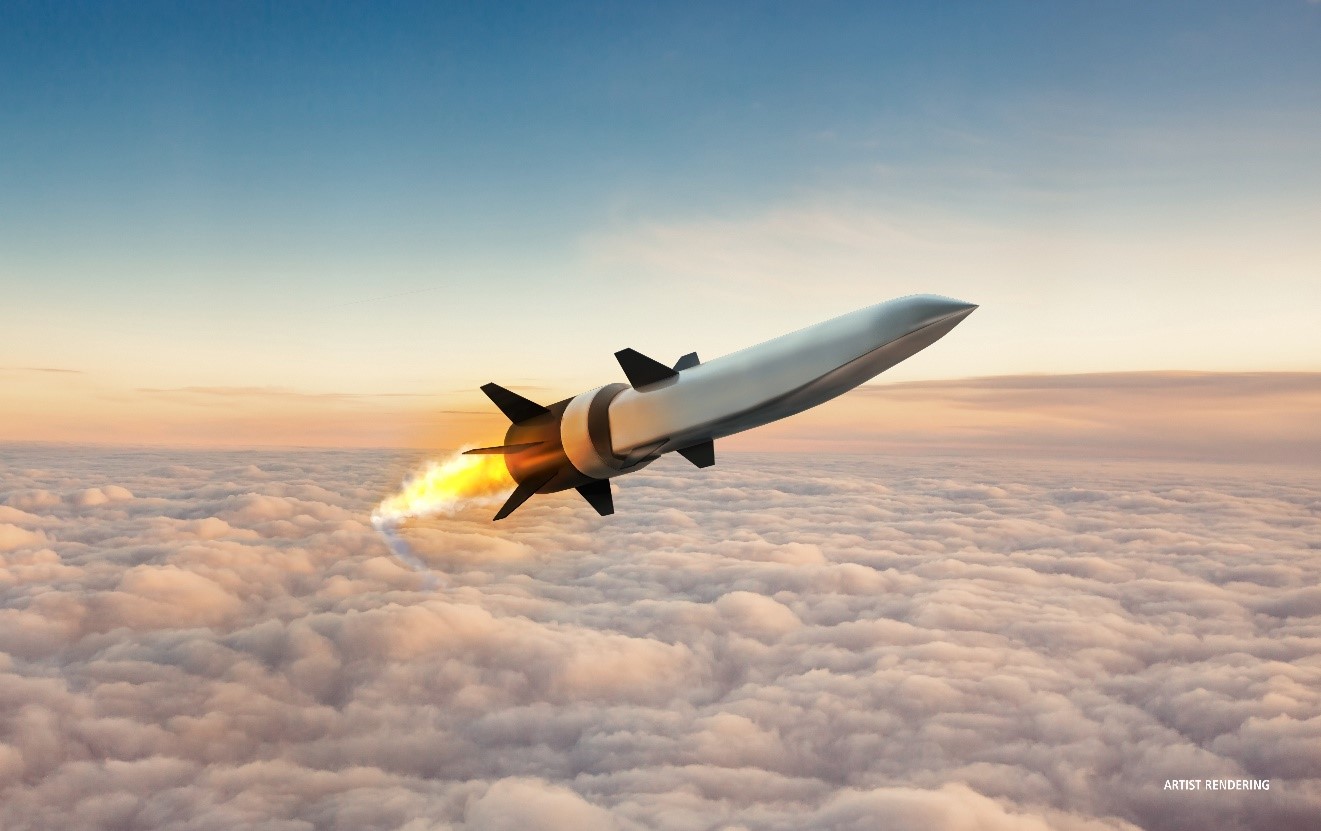 Breaking Defense: What have you learned from the three HAWC flight tests [two with Raytheon/Northrop Grumman, one with Lockheed Martin]? Were these flight tests designed to test different types of technologies? Is HAWC a competition leading to a downselect and an Air Force production contract in the future?

Knoedler: When the Air Force Research Lab and DARPA set up this program, we were looking to the primes to provide a diversity in designs to go after our major objectives, which were flying faster than Mach 5, higher than 60,000 feet, and range greater than 300 nautical miles.

I wouldn’t call it a competition, per se, although it looks like that to the general observer. We, DARPA, always try to exercise, test, and demonstrate anything that we think is going to give the services a choice later on as they try to transition DARPA technologies to the warfighters.

One of our key technical pillars [with HAWC] was attention to affordability in the design. We asked our primes to look at affordability at the start and not to gold plate it such that we can’t make thousands of these in the future if they get transitioned. They made choices based upon that goal so that they weren’t choosing exotic materials and weren’t doing contortions within the manufacturability. In other words, we can do it with a standard process so that subcontractors and lower-tier vendors could manufacture these given a drawing.

Our biggest lesson learned [from the test flights] is that we did verify the feasibility of an air-breathing weapon concept. If you go back in time and look at the other X-vehicles that were flown, the X-43 and X-51, we just took it to the next step. I wouldn’t say that it was to a full weapon prototype, but it certainly matured the technology that those X-vehicles had. We went a little bit higher, a little bit faster, and a little bit longer than those guys did.

I talked about the big objectives: speed, range and altitude. We also managed to show that we could safely separate from our launch aircraft. We were able to stage it and light the scramjet engine, which was always a challenge from previous efforts. We were able to accelerate and get this on the cruise point that we were aiming for.

Breaking Defense: What’s next for HAWC? Is there a connection between this program and the Air Force’s Hypersonic Attack Cruise Missile (HACM), an air-launched, scramjet-powered hypersonic weapon designed for high-value targets in contested environments from standoff distances.

Knoedler: We had a certain number of vehicles that we asked each performer to build, and at this point we are doing the final assembly for each performer. Then we will see whether those are healthy enough to fly over the next few months.

Regarding HACM, we have been working closely with the Air Force Life Cycle Management Center at Eglin and their Hypersonic Attack Cruise Missile. Certainly we’ll be involved in offering our advice and our lessons learned. The intent was to leverage the work that DARPA and AFRL did for the HAWC program so that they could then go off and build something that the Air Force would like to operate.

Breaking Defense: It’s said that air-breathers will be less costly and easier to manufacture in quantity because they don’t need the super advanced materials that a boost-glide hypersonic weapon would require. What are the technological manufacturing challenges that you addressed for HAWC?

Knoedler: Forgive me for a bit of alliteration, but I like to describe hypersonics as technology that’s hot, it goes into the high-altitude regime, it’s high speed, it’s hard, and there’s always a bit of hype associated with all hypersonic programs.

For us, hot is important. We’re careful about the materials we use and I’m not going to specify them, but let’s just say I’m not picking the exotic [materials], thermal barrier coatings, and complicated manufacturing processes that you might see on a space shuttle because I’m not going Mach 25 re-entering the atmosphere.

I’m making sure I’m hypersonic, but I’m going to choose materials that are generally available in aerospace. We’re going to use some strong alloys, and we’re choosing our trajectories and profiles so that we know those materials are going to survive for the length of time that we’re going to fly. We’re certainly going to challenge those alloys, but we’re not going to make it so gold-plated that we can’t afford these things or use the industrial base as it exists right now to make them at rate.

Glide Breaker is about hypersonic maneuverability

Breaking Defense: What is the threat scenario today as it relates to defensive hypersonics?

Breaking Defense: DARPA has released an artist’s conception of Glide Breaker, and its hit-to-kill against highly maneuverable hypersonic threats, which we’ll publish with this Q&A. Please explain what we’re looking at in the graphic.

Greiner: That image depicts two hypersonic threats, doesn’t matter what they are, coming from the right to left. Then coming from the left is our artist rendition of the kill vehicle that we are notionally targeting for this defensive mission.

The way that we’re viewing this system is very similar to the SM-3, which is a multi-stage system that also dispenses a kill vehicle, which then does the final course corrections in order to achieve and consummate the hit-to-kill engagement. That is what we are trying to achieve in the exoatmospheric regime against a hypersonic vehicle.

[In the graphic], you see an image of this vehicle positioning itself in front of that hypersonic glide vehicle to achieve the hit-to-kill. You’ve heard this before but it’s essentially a bullet hitting a bullet.

Breaking Defense: Phase 1 of Glide Breaker focused on developing and demonstrating a divert and attitude control system (DACS) that enables a kill vehicle to maneuver and intercept hypersonic weapon threats during their glide phase. Please explain and describe what you’ve found at the conclusion of Phase 1.

Greiner: When we talk about defense and intercepts, when you’re trying to intercept something [with] a head-on-head collision, just like what’s in the image, there’s necessity to overmatch the threat. If a threat can pull X G’s, you need to be able to pull more G’s than that because as soon as it makes a move you’re now having to catch up. You always have to have overmatch.

When you actually are engaging, you by definition are at the same altitude as the threat. [That means] your maneuverability is essentially the same or on parity as theirs if you’re going the same velocity.

That makes pulling an angle of attack [maneuver] to complete a hit-to-kill engagement very difficult if not impossible for a maneuverable threat. Therefore, we have to go to a propulsive solution to get a propulsive overmatch of this threat. That is what drove us down the direction of utilizing a divert and attitude control system.

We have two performers, AerojetRocketdyne and Northrop Grumman. Both are complete with their design phases and are going into testing phases now. So nothing I can share about that other than saying that there’s going to be more coming forward as we progress through our test activities with them.

Breaking Defense: And now Phase 2, which will focus on wind tunnel and flight testing to quantify aerodynamic jet interaction effects that result from DACS plumes and hypersonic air flows around an interceptor kill vehicle. Please explain.

Grenier: Phase 1 was looking at the internals, Phase 2 is looking at the externals. Once the DACS, in all its glory, is producing a big, hot plume of gas, it exits a nozzle that is essentially perpendicular to the direction of travel.

Imagine this kill vehicle traveling at hypersonic speeds through the atmosphere and introducing this high momentum jet of gas into a hypersonic cross flow. That’s unlike the ballistic missile defense world where we do this intercept exo atmospherically without cross flow because there’s no flow around the body.

In this case we have quite a high momentum flux going across the body so when I introduce that jet there’s going to be an interaction between it and the hypersonic cross flow.

The problem is that we have very little data to go on to help us understand that effect because it’s not something that we’ve had applications before that required us to look at this.

The purpose of Phase 2 is to collect the data that we need in wind-tunnel testing to help us inform future kill vehicle designs from both control and design standpoints, as well as actually doing a flight test of a system where we actually put it onto a rocket to gather data.