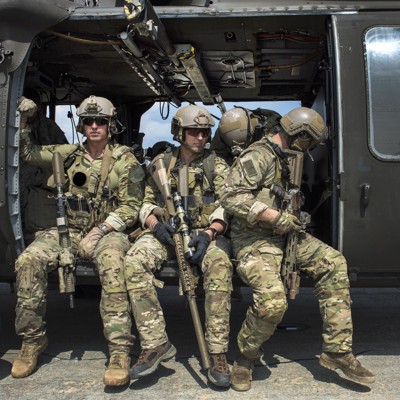 As the Pentagon continues to shift away from two decades of counterterrorism, special operation forces are getting left out of the conversation, Assistant Secretary of Defense for Special Operations and Low-Intensity Conflict Christopher Maier said at National Defense Industrial Association’s SO/LIC Symposium Friday.

“Sometimes the outsized role of SOF in CT is a bit of a drag, in the sense that people associate the SOF enterprise with the CT mission and not much else,” Maier said.

But special ops forces have far more to offer. For example, it is part of the reason Ukraine is beating Russian forces back, said Kenneth Tovo, a retired three-star who led Army Special Operations Command until 2018. “Eight months of combat success of Ukrainian forces were built on eight years of partnership and training with the U.S.,” Tovo said at the symposium.

But Maier said special operators  still largely don’t “have a voice at the table in the Pentagon.” He added that one of the community’s biggest obstacles to greater participation is “defining the value of SOF unique from some of the other aspects of the Defense Department.”

Opportunities will be missed, Maier said, if SOF isn’t considered as a valuable asset in operations other than counterterrorism.

“We’ll miss the opportunity to have the right capabilities, the right people at the right place,” he said. “We need to make sure that the experience over the last 20 years with the counterterrorism fight that has rightfully given SOF so many accolades isn’t overly interpreted by some as the one-trick pony.”

The solution, Maier says, is education.

“There’s not a lot of institutional knowledge that goes back, frankly, to the pre-2001 era. No understanding that this is kind of what SOF has always done,” he said. “So there’s a significant amount of, I’ll say, education, but also advocacy required in these conversations, in some cases, just to get a seat at the table.”

“If you look at SOF’s upbringing, it started in great power competition. So the DNA is there,” Bauernfeind said.

The Pentagon has known since the 2018 National Defense Strategy that counterterrorism was not the way of the war of the future, he said. The 2018 NDS allotted 5 percent of operations towards great power competition. In the 2022 NDS, that percentage grew to 30 percent, and during the 2023 fiscal year, “half of our activities will be focused on great power competition,” Bauernfeind said.

And SOF will be left out of it all if it doesn’t demonstrate its value in that battlespace.

“After two decades of hard-fought combat relevance and being very successful in the counter-violent extremist organization fight, we need to return to our roots,” Bauernfeind said. “We have to put our money where our mouth is.”