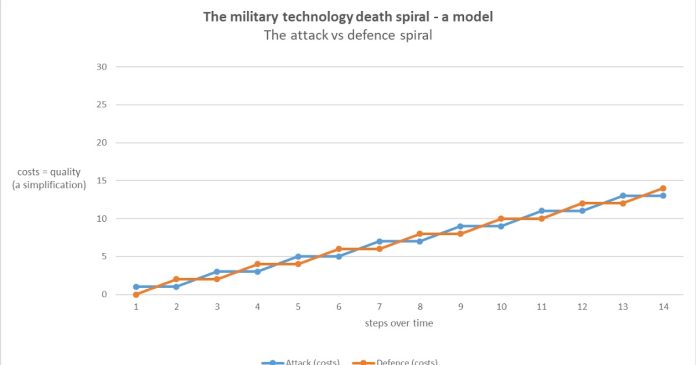 The quintessential platforms of army, navy and air forces seem to get more and more expensive, and ever less affordable. This was sometimes described as a “death spiral” and may lead to a point when it’s about time to give up on such a platform concept.

I will try to offer a concise, illustrated explanation of this very important phenomenon. My model is simplified* and assumes among other things that there’s always a counter to a counter possible.

At first, let’s look at a simple modelling of a spiral between attack and defence. A form of attack (or firepower) is introduced, which provokes a countermeasure that largely or entirely mitigates this capability. The response is an improved attack capability that overcomes the defence. Rinse, repeat.

The costs of attacking and defensive abilities escalate together with said abilities. A 3.7 cm anti-tank gun did cost much less than a 8.8 cm anti-tank gun, and 15 mm of steel plate did cost less than 100 mm of steel plate. My model assumes that capability and costs are proportional (normally costs rise more than proportionally) to reduce one layer of detail that doesn’t matter right now. 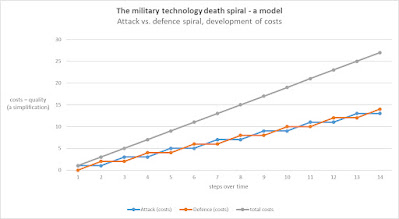 You see an additional dimension in the next diagram; the utility or usefulness (for deterrence, in warfare or both).

This scenario shows a rising usefulness, as the platform becomes more capable over time. Still, the escalating costs may eventually exceed the usefulness in warfare. The entire concept of this platform (which unites offensive and defensive capabilities such as a strike fighter, a tank or a destroyer) should be questioned at the latest at this break-even point. Further improvements are not worth the associated expenses. Different ways of ‘doing business’ in war should be found. The platform that unites offensive and defensive abilities is likely already obscenely expensive at this point. 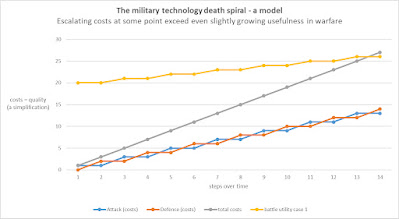 Many
metrics could be used to describe usefulness, such as how deadly a
platform is, but in the end this is not a value that can truly be
calculated. The entire model does not offer a formula for calculation. It is meant to create awareness in the reader’s mind about this break-even point and why it will be reached eventually.

The next diagram shows a different, more pessimistic scenario. The platform’s usefulness in warfare actually degrades as its evolution is driven by the attack-defence spiral instead of by the mission. 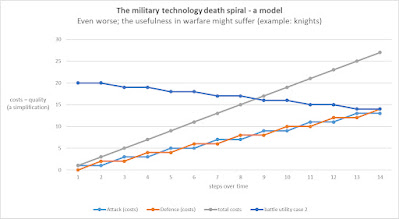 Medieval
knights were a good example for this. They were initially an all-round
mounted force, but at the latest by the 11th century the weight of armour reduced their utility to a specialised battlefield shock
attack force. The personnel also gained a high social status. Other cavalry tasks such as scouting or foraging were thus usually left
to light cavalry. Horse cavalry only re-united into a unified cavalry
in the 19th century when firepower had won so clearly over the cavalry’s defence that the heavy cavalry niche became impractical. 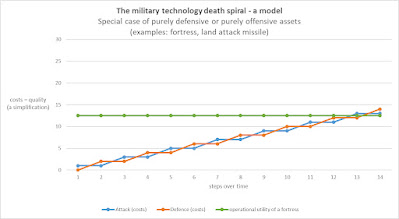 Asymmetric arms races (such as cruise missiles versus air defence missiles) add another aspect. The offensive capability may keep getting funded for good reasons after its costs exceed its direct utility: Such a decisions an be justified by taking into account indirect utility; the expenses incurred on the opposing forces for defence against the threat. Land attack cruise missiles won’t be self-defeating by high costs if the defence against them are more expensive missiles. Then the production of the threat system (cruise missile) would be escalated as long as the opposing forces waste their resources trying to build up a defence against it. Finally, the defenders may cease to throw more resources into a hopeless arms race and then the optimum for the threat system (cruise missile) would in theory exist: A maximised difference between the (sum of direct and indirect) utility and the (lower) expenses for it.

So in the end, the asymmetric arms races can be described using the same graphics, just keep in mind that utility = direct utility and indirect utility in such cases.

Certain platforms -especially tanks- have been proclaimed “dead” when a new iteration of a counter looked particularly convincing, such as the rise of anti-tank guided missiles in the 1960’s. But engineers usually find a new iteration that counters the counter, such as composite and reactive armours that kept 1960’s anti-tank missiles from penetrating most of a 1980’s tank’s front. Potential technical counters are known to just about all forms of attack today. Likewise, counters to just about all forms of defence can be found.

I assert – and this model visualizes –  that the real death knell for a concept is not some spectacular-looking iteration of a counter to it: It’s that the death spiral of escalating costs does at some point exceed the usefulness (the utility) of a platform. This doesn’t necessarily stop the evolution, though. Usefulness in warfare cannot easily be monetised and compared to expected costs of a platform evolution step. We may – and likely do so regularly – keep going in the death spiral, wasting resources on platforms that have long become inefficient.

You may use and modify the model with proper attribution (author Sven Ortmann, Defence & Freedom blog).

*: Models should be simple and reduced to one thought or essence when meant for explanation. Complicated models are good for simulation purposes only.

Tigress Pro Series Rigging Kits are Perfect For Every Vessel