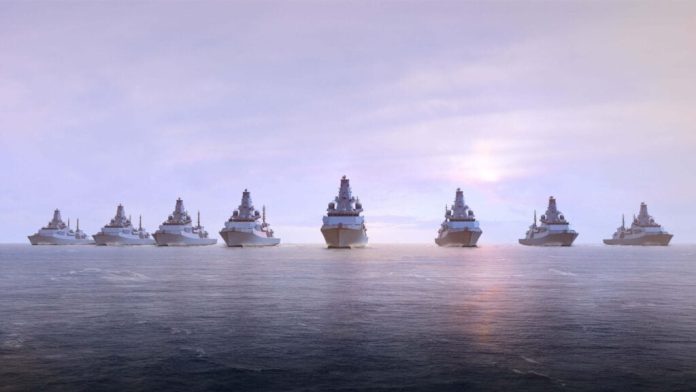 DUBLIN — In a two day span this week, the UK Ministry of Defense (MoD) pledged funding of $7.9 billion to industry contractors for the second batch of Type 26 frigates and building of Fleet Solid Support ships, as part of a major modernization effort for the Royal Navy.

Announcing the $6 billion contract award to BAE Systems for City Class (as designated in Royal Navy service) frigates on Nov. 15, London said five new ships are to be manufactured and will lead the Royal Navy’s anti-submarine warfare surface fleet. The vessels are in line to join a first batch of three Type 26 frigates already under construction in Govan, Scotland.

“Construction of all eight frigates is expected to be completed by the mid-2030s, with the first, HMS Glasgow, entering service by the end of 2028,” the MoD stated, the first time that timeline was made official.

The Type 26 fleet will go on to replace most of the Royal Navy’s Type 23 frigates. The rest of the frigate fleet, used for “general duty,” is set to be succeeded by five Type 31 ships — the first of which has already gone into production in Rosyth, Scotland.

“Due to lessons in building the first batch of new frigates, plus improved assembly facilities — including a new undercover construction hall — the final five Type 26s will be built for around two-thirds the cost of the initial trio, and they will be built and delivered to the Fleet more quickly,” said the Royal Navy in its statement.

The statement also revealed officially that all of the Type 26 frigates are to receive Sea Ceptor missile refence systems, 5 inch medium caliber main guns, medium-range radars supplied from either Merlin or Wildcat helicopters, array sonars, and Mk41 vertical launch silos for missile systems. The ships will additionally be equipped with a “mission bay,” enabling them to carry “adaptable pods” for multirole operations including disaster relief, drones, and mine warfare.

The ships measure just short of 150 meters in length, offer a maximum speed of 26 knots, a range beyond 7000 nautical miles and will also be capable of carrying out counter piracy operations.

Just a day after the City Class contract award announcement, London announced on Nov. 16 it had finally selected a “preferred bidder” for its Fleet Solid Support ships program with a contract of $1.9 billion offered for shipbuilding of the vessels.

Team Resolute, an industry collective made up of Harland and Wolff and Navantia UK, received the “preferred bidder” status, which caps a long delayed and often politically bruising effort by the MoD over the last five years to select an industry partnership for the FSS shipbuilding.

The contract itself remains subject to UK Treasury and ministerial approval but could be awarded by Defense Equipment and Support (the UK’s military procurement arm) by the first quarter of 2023, pending “completion of a successful preferred bidder stage and final approvals,” noted the MoD.

Under the FSS program, three support ships are to be delivered to the Royal Fleet Auxiliary (the Royal Navy’s logistics and support arm). The vessels will be designed to provide munitions and stores to the Royal Navy’s aircraft carriers, destroyers and frigates when deployed at sea.

“The proposal pledges that the entire final assembly for all three ships will be completed at Harland & Wolff’s shipyard in Belfast, [Northern Ireland] with the three 216-metre-long vessels – each the length of two [English] Premier League football pitches – to be built to Bath-based BMT’s entirely British design,” said the MoD.

“Under the contract, the majority of the blocks and modules for the ships would be constructed at Harland & Wolff’s facilities in Belfast and Appledore [England] with components to be manufactured in their other delivery centres in Methil [Scotland] and Arnish [Scotland]. This programme, which would also support a significant British-based supply chain, would be undertaken in collaboration with internationally renowned shipbuilder, Navantia [Spanish shipbuilder].”

Navantia’s Cadiz, Spain, facility will host some of the build work with production slated to begin in 2025. All three support ships are expected to be operational by 2032.

The Type 26 and FFS ship efforts are among seven major “Royal Navy Fleet of the Future” programs listed in the UK’s National Shipbuilding Strategy Refresh published in March 2022.

For UAS to operate in contested airspace, autonomy is key