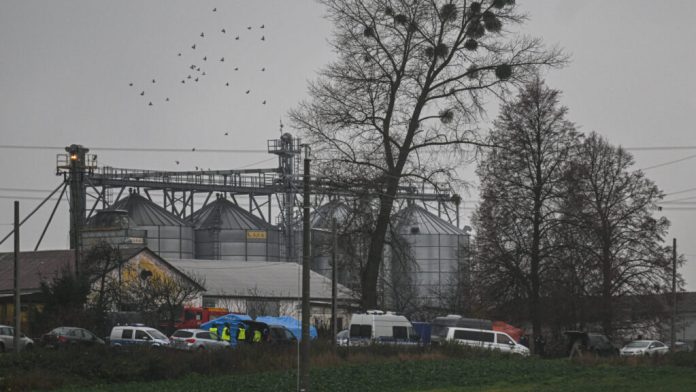 A view of police officers next to the blast sit on November 16, 2022 in Przewodow, Poland. Poland convenes a meeting of its national security council amid reports that stray missiles hit its territory, killing two people. (Omar Marques/Getty Images)

HALIFAX — A top advisor of Ukrainian President Volodymyr Zelensky said it was too early to conclusively say whether a missile that exploded in Poland, killing two civilians, was fired by Russia or Ukraine.

The comments, made by Zelensky advisor Andrii Yermak, continue Ukraine’s pushback against the idea that it was a Ukrainian missile that had accidentally entered Polish airspace, but slightly soften earlier comments from Zelensky that there was “no doubt” that Russia was responsible.

“It’s a little bit not right to say that it’s a Ukrainian rocket or a Russian rocket” before Poland reaches the result of its investigation, Yermak told attendees of the Halifax International Security Conference via teleconference.

Ukraine is “working really closely” with Poland to “investigate what really happened,” Yermak said. “It’s really necessary to wait on the results on the investigation.”

A projectile hit near Poland’s border with Ukraine on Nov. 15, sparking questions about whether Russia had either intentionally mounted an attack — potentially triggering an explosive war with NATO — or whether the strike had been an accident.

RELATED: Ukraine held off Russia for nine months. Here’s what it needs to keep going.

Within hours of the explosion, Moscow denied responsibility for the incident, stating that claims that the missile had been fired by Russian troops was a deliberate provocation by the West to escalate tensions. Meanwhile, Poland, meanwhile, signaled it could invoke NATO’s Article 4, which would begin formal consultations between allies about the issue.

A day later, Polish President Andrzej Duda said the initial findings from the investigation pointed to a stray Ukrainian missile fired from a Russian-made S-300, with NATO and US leaders later weighing in to support the Polish assessment.

However, Ukrainian officials have continued to state that investigations would prove that Ukraine was not responsible for the incident, with Zelensky stating on Nov. 16 that he had “no doubts” that it was a Russian missile. According to Politico, US officials have pushed Zelensky and other European leaders to pivot away from making declarative statements attributing the missile to either nation until the investigation is complete.

Zelensky, who spoke via a prerecorded video message at the forum on Friday, did not mention the incident in Poland. However, the Ukrainian leader made headlines after stating that Moscow offered a “short truce” to Ukraine, which he rejected due to fears that Russia could use that time to reconstitute its forces

During his remarks at Halifax, Yermak seemed to walk that statement back, stating “Concretely, we have not seen any application from the Russian side,” pointing to Zelensky’s 10-point peace proposal as the best way forward for brokering an end to the conflict.