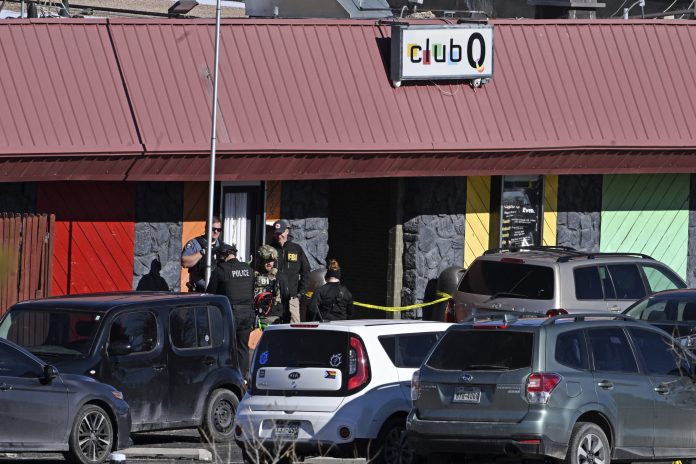 What does someone have to do in Colorado Springs to be arrested, prosecuted and tossed in jail. A lot, it seems, but making a bomb threat that results in the evacuation of a neighborhood and being charged with felony kidnapping don’t seem to be enough to bring the law down on you.

The piece of human detritus that opened fire in the Club Q gay nightclub Saturday night and murdered five people was no stranger to local law enforcement. As the AP reports . . .

A year and a half before he was arrested in the Colorado Springs gay nightclub shooting that left five people dead, Anderson Lee Aldrich allegedly threatened his mother with a homemade bomb, forcing neighbors in surrounding homes to evacuate while the bomb squad and crisis negotiators talked him into surrendering.

Yet despite that scare, there’s no public record that prosecutors moved forward with felony kidnapping and menacing charges against Aldrich, or that police or relatives tried to trigger Colorado’s “red flag” law that would have allowed authorities to seize the weapons and ammo the man’s mother says he had with him.

Those are some terribly inconvenient facts that aren’t being allowed to get in the way of a torrent of calls from politicians and gun control advocates as they — once again — waive the bloody shirt and call for more gun control laws.

Take, for example, whoever it is in the White House that writes and issues statements in the name of Joe Biden.

…yet another community in America has been torn apart by gun violence. More families left with an empty chair at the table and hole in their lives that cannot be filled. When will we decide we’ve had enough? We must address the public health epidemic of gun violence in all of its forms. Earlier this year, I signed the most significant gun safety law in nearly three decades, in addition to taking other historic actions. But we must do more. We need to enact an assault weapons ban to get weapons of war off America’s streets.

Thank you, @POTUS. It is imperative that the new Congress make gun violence prevention a #1 priority.

You can’t be tough on crime if you’re not tough on guns. And yet, media rarely question or contextualize politicians who run campaigns by stoking fears over crime while doing anything to limit the amount of guns people use to commit crime.

An LGBTQ nightclub is meant to be a safe space to let go, dance with friends, and meet new people.

We shouldn’t have to be afraid of being gunned down at Club Q or anywhere else.

We must confront the deadly combination of gun violence and hate and pass the #DisarmHate Act.

Yet Aldrich clearly broke a range of laws back in 2021, some of them felonies that should have landed him behind bars and would have have made it illegal for him to own or possess firearms under current gun control laws. And no, we don’t have any illusions about the effectiveness of that prohibition, but if his ass had been in the county lockup, it wouldn’t have been in Club Q on Saturday night.

Meanwhile, the local powers that be seem to be doing everything they possibly can to avoid questions about why Aldrich was never prosecuted.

The county sheriff’s office declined to answer what happened after Aldrich’s arrest last year, including whether anyone asked to have his weapons removed. The press release issued by the sheriff’s office at the time said no explosives were found but did not mention anything about whether any weapons were recovered.

An online court records search did not turn up any formal charges filed against Aldrich in last year’s case. And in an update on a story on the bomb threat, The Gazette newspaper of Colorado Springs reported that prosecutors did not pursue any charges in the case and that records were sealed.

Never mind all that, though. As far as anyone in government and the media are concerned, Saturday’s atrocity is yet another example of why America has too many guns and Americans have too many rights to own and carry them. They’re not about to let a crisis go to waste, no matter what the facts of what’s happened in Colorado Springs over the last 18 months may be.