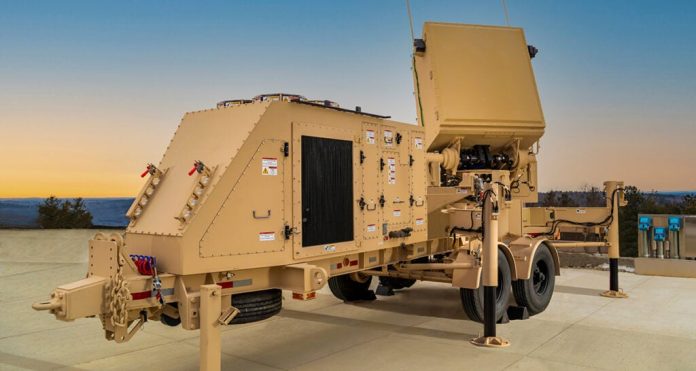 GhostEye® MR has made a lot of headway since its debut at the Association of the U.S. Army’s annual meeting in October 2021.

“It’s hard to believe that only a year has passed since we introduced the new radar,” said Carl Hartford, the program’s chief engineer and technical director at Raytheon Missiles & Defense, a business of Raytheon Technologies. “From advanced search and tracking of live targets to a weeklong U.S. government demo featuring the sensor’s multi-mission capabilities, the progress is palpable.”

GhostEye MR, an advanced medium-range air and missile defense radar, detects, tracks and identifies a broad range of threats, from cruise missiles and drones to fixed-wing and rotary-wing aircraft. And the new 360-degree surveillance and fire-control sensor leverages commonality with the Lower Tier Air and Missile Defense Sensor, or LTAMDS, that Raytheon Missiles & Defense is making for the U.S. Army.

Since completing design and development of GhostEye MR’s hardware and software in mid-2021, the program team has built a full system prototype.

“Utilizing our open-air testing facility in New England, we’ve integrated our search/track capabilities with the hardware and have successfully tracked targets of opportunity,” Hartford said.

Through hardware and software simulation and live-tracking results, the team has started to verify the system’s performance and validate its full capability.

“Given the rapid development and integration our team has achieved, we are ready to showcase GhostEye MR to more potential customers and partner with the U.S. government for multi-mission experimentation in 2023,” Hartford added.

In the coming months, the GhostEye MR team will conduct additional hardware and software tests and utilize instrumented targets to verify the accuracy of the system’s fire control.

“It’s crucial that we maintain our momentum,” said Rob Lescanec, Director of Requirements & Capabilities for Land Warfare & Air Defense at RMD. “The United States and its allies are facing increasingly sophisticated threats, such as cruise missiles and advanced aircraft as well as unmanned aerial vehicles, such as drones. This has driven high demand for medium range air defense solutions to defend that space.”

NASAMS is produced and supported by Raytheon Missiles & Defense in partnership with Norwegian company Kongsberg Defence & Aerospace. This medium-range air defense system has been operational for 30-plus years and is currently used by the U.S. and 11 allied nations. (Photo: Kongsberg Defence and Aerospace)

The idea to create GhostEye MR originated in early 2020 as an opportunity to enhance the National Advanced Surface to Air Missile System, or NASAMS, to counter a new generation of threats.

That system uses Raytheon Missiles & Defense’s Advanced Medium Range Air-to-Air Missile Extended Range variant, or AMRAAM®-ER, and GhostEye MR will enable this effector to extend coverage of its full kinematic envelope, or reachable area. The GhostEye MR program is working toward a live-fire test of the radar integrated with NASAMS.

In addition to GhostEye’s flexible architecture, two of its essential technologies will give NASAMS an advantage: active electronically scanned array, or AESA – which sharpens detection, targeting and tracking – and military‐grade gallium nitride, or GaN – which strengthens the radar’s signal, boosting its sensitivity for longer range, higher resolution and increased capacity.

“GhostEye MR improves NASAMS’ decision-making capacity, expands the range and altitude that system can reach and defend,” Lescanec said. “All this leads to heightened accuracy and performance in the battlespace—which is critical as adversarial threats are becoming faster, smarter and more ubiquitous.”