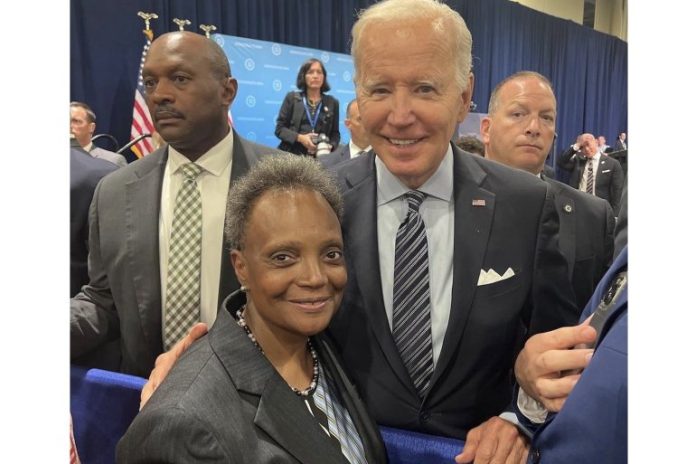 Murder City, USA Mayor Lori Lightfoot tweeted out a rather eloquent quote this past weekend. She wrote, “I’m sick of this sh*t.”

I’m sick of this shit. How many people need to be murdered? How many lives torn apart? Until it actually stops?

Chicago’s problems continue to spiral out of control thanks to woke policies, social justice leadership and a “progressive” prosecutor running the city and its failed criminal justice system. The biggest victims of all of it, of course, are the city’s minority communities . . .

Here are six clear indications that progressive apologetics have undermined public safety, with the toxic effects most deeply felt in Chicago’s black communities.

This mayor, who spends most of her weekends at her home in Michigan rather than in  the city she “governs” can’t bother to tackle the violence plaguing her own city’s streets. But she has plenty of time to wade into a tragedy in Colorado.

This should surprise no one.

Lightfoot is all symbolism and very little substance.  Don’t buy a gun, call 9-1-1 (and wait) instead she tells residents. Instead of hiring more cops, she throws $400 million more at failed “gun violence” prevention programs. Frankly, under a mayor who can’t even label gang violence as “gang violence” and instead pretends it’s “gun violence,” no amount of government deficit spending will fix it.

Meanwhile as residents die on he streets of her city, she’s making TikTok dance videos about how wonderful her corrupt, crime-ridden fiefdom is.

Mayor Lightfoot, of course, doesn’t have to worry about violent crime. She’s has her own dedicaed 90-person security detail to keep her safe. That’s more cops than almost every other city department in the state of Illinois.

Now, however, she wants you to know how outraged she is by the shooting in Colorado Springs. Never let a good crisis go to waste.

15 Best Survival Shovels Of 2022 (And Our Readers Favorite!)