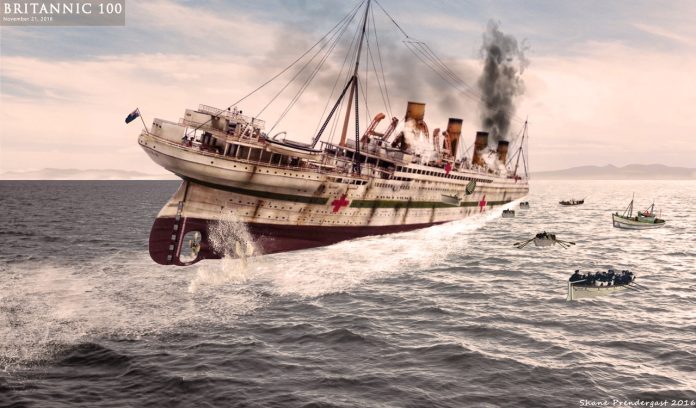 On November 21, 1916, Britannic, the sister ship to the Titanic, sank in the Aegean Sea, killing 30 people. In the wake of the Titanic disaster, the White Star Line had made significant modifications to the design of the ship, but on its way to pick up wounded soldiers near the Gulf of Athens, it was rocked by an explosion causing even more damage than that which had sunk the Titanic. Many of the dead were from some of the crew who attempted to launch lifeboats while the Captain tried to run the ship aground. The lifeboats were sucked up into the propellers, killing all of those on board. The cause of the explosion is still unknown, but many suspect that it hit a mine.

Ready Made Resouces — our most loyal advertiser — is running a special on refurbished AN/PVS-14 green phosphor night vision monocular/weapon sights. This will save you $1,100 off the cost of a new PVS-14.

Optics Planet (one of our affiliate advertisers) is running a short-term 10% off sale, for several Nightforce rifle scope models. At their site, search for: NightForce NXS and NightForce SHV.

A special note courtesy of AmmoLand for readers in Oregon about Measure 114:

“Separated by about a percentage point at this writing, it appears that Oregon’s Ballot Initiative 114 is going to pass. And despite assurance by those who lie about guns and those ignorant and/or biased enough to believe them, a lot more than “common sense” inconveniences will result. In effect, it will be shutting down gun sales.

“Based on the passage of Oregon Ballot Initiative 114 and its expectation to take effect on December 08, 2022, Sportsman’s Warehouse currently understands the following impacts to Oregon residents,” the outdoor sporting goods retailer announced on its website. Sales will be shut down.

– December 07, 2022 (Wednesday) will be the last day to purchase a full capacity firearm magazine (magazine with a capacity greater than 10 rounds).

– December 07, 2022 (Wednesday) will be the last day to purchase a firearm equipped with a full capacity magazine (firearms equipped and sold with magazines holding more than 10 rounds).

– December 07, 2022 (Wednesday) will be the last day to purchase ANY firearm without a valid Oregon Firearm Purchase Permit.

– If a firearm customer’s background check is delayed (goes into the “OSP que [sic]”) and the approval comes on or after December 08, 2022 (Thursday) – the customer will need a valid Oregon Firearm Purchase Permit to take possession of the firearm.

– On and after December 08, 2022 (Thursday) all firearm buyers must have an Oregon Firearm Purchase Permit to purchase ANY firearm.

At this time there are no known OR law enforcement agencies issuing the Oregon Firearm Purchase Permit.”

JWR Adds: Since the mechanisms for setting up fingerprinting, training, and gun permit issuance may not be established for many months, Oregonians are advised to stock up heavily, now, especially on 11+ round magazines. Your window of opportunity is about to slam shut! Two weeks, and counting.

Thankfully, pre-1899 antique guns and blackpowder replica revolvers are exempted, so I will continue to be able to mail guns to folks in Oregon, from Elk Creek Company.

Today’s feature article was written by our Field Gear Editor Emeritus, Pat Cascio. Please keep Pat in your prayers, since he has recently been in very ill health.