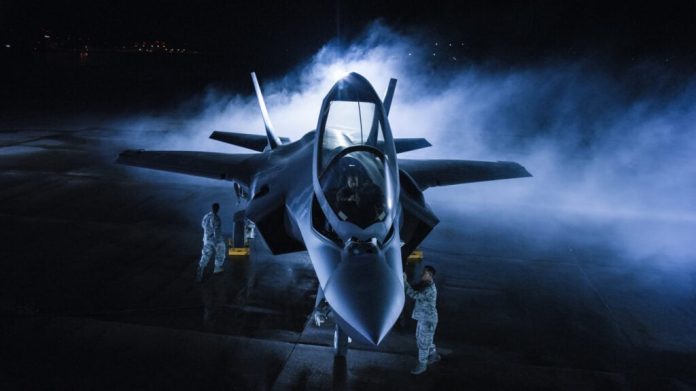 WASHINGTON — The most widely used version of the F-35 still can’t fly in lightning, and despite hardware and software modifications, the Pentagon doesn’t have a path forward to lift ongoing flight restrictions.

In June 2020, the Pentagon’s F-35 Joint Program Office instated flight restrictions for the F-35A conventional takeoff and landing variant after damaged tubes were found inside its key lightning protection system, the Onboard Inert Gas Generation System, or OBIGGS.

Air Force Times reported earlier this year that the program office could clear the fighter to begin flying within 25 miles of lightning after testing a fix for the OBIGGS system this summer. However, after assessing the hardware and software upgrades, the JPO has recommended flight restrictions remain in place, according to Chief Petty Officer Matthew Olay, an F-35 JPO spokesman.

“Due to additional findings earlier this year, this upgrade will provide an improvement, but is insufficient to lift the lightning restriction,” Olay told Breaking Defense. “Lightning restrictions will be lifted when all safety concerns are resolved or acceptably mitigated.”

The JPO declined to comment on what caused the program office to keep flight restrictions in place, with Olay stating that “due to operational security reasons the JPO will not comment on the specific findings.”

The F-35 relies on its OBIGGS to safely fly in thunderstorms or other conditions where lightning is present. The system makes the jet’s fuel tanks inert by pumping nitrogen-enriched air inside — preventing the aircraft from exploding if  the tanks are struck by lightning.

The F-35’s OBIGGs system has been headache for the Pentagon at multiple times throughout the Lockheed Martin-made aircraft’s lifespan — sometimes resulting in japes about how an aircraft called “Lightning II” can’t fly in its namesake. In the early 2010s, the Pentagon imposed flight restrictions on the F-35 after its independent weapons tester discovered the fuel tanks weren’t receiving enough nitrogen-enriched gas to make it completely inert. After the OBIGGS was redesigned, the program office cleared the F-35 to fly near lightning in 2014.

The latest problem was found in June 2020 during routine depot maintenance of an F-35A at Hill Air Force Base’s Ogden Logistics Complex in Utah. At the time, Bloomberg reported a JPO memo describing inspections where 14 of the 24 F-35As assessed contained OBIGGS with damaged tubing.

The issue caused the Pentagon to temporarily pause F-35 deliveries for a couple weeks in order to rule out a problem with OBIGGS production, but deliveries resumed after Lockheed validated that it was installing the system correctly, with issues developing later after operational use, a Lockheed spokesman said then.

The program office began implementing a hardware modification in November 2021 that “replaces a section of OBIGGS tubing and fittings with a more robust design” better able to withstand the vibrations that occur during flight, Olay said. A software improvement, which notifies a pilot when the OBIGGS system is degraded, began rolling out in August 2022.

The Air Force owns about 375 F-35As as of fiscal 2022, according to the service’s budget. The JPO declined to comment on how many of those aircraft have gone through the hardware retrofit process so far, citing operational security concerns. However, all A models will receive the upgraded hardware, “regardless if tube damage is found,” Olay said. Those modifications are taking place at the unit level and will be complete by 2025.

Although flight restrictions remain in place — and fighter pilots avoid training in thunderstorms regardless of what aircraft they are operating — there have been cases where F-35 pilots have found themselves flying in inclement weather and were struck by lightning.

As of late January 2022, F-35 units across Air Force, Marine Corps and Navy had reported 15 lightning strikes that have caused damage to F-35s operating in midair, reported Air Force Times.

During an Aug. 3, 2021 incident, lightning hit an F-35 during flight, damaging the jet’s canopy and panels on its fuselage. The pilot was unharmed, but the Air Force categorized the event as a Class B mishap, with the estimated cost to fix the aircraft amounting between $600,000 and $2.5 million, according to the report.