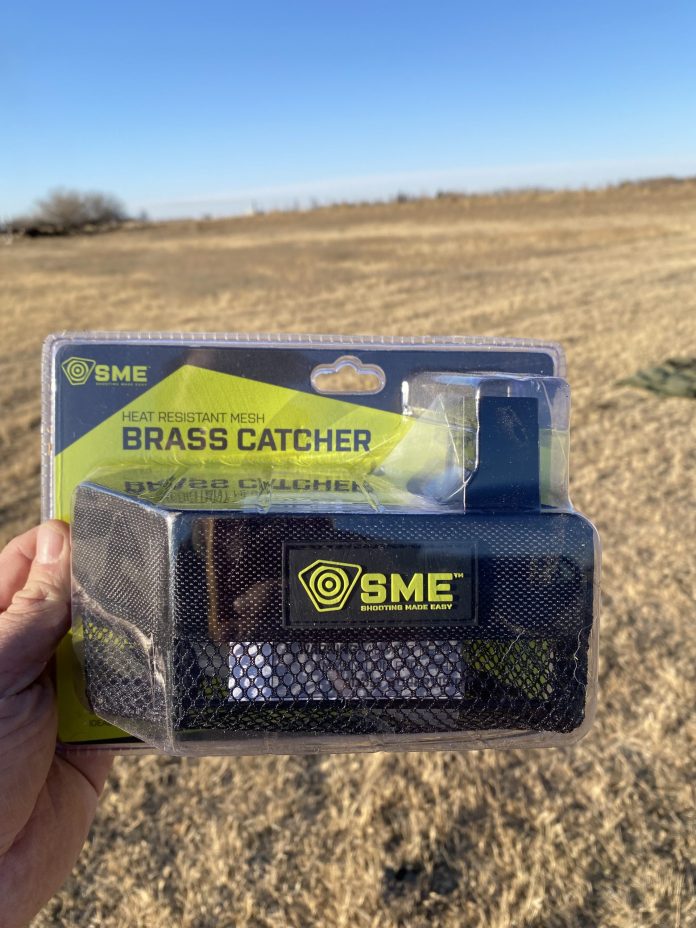 Thus far, the ’20s have been an ammo crunch like we have never seen. Which makes every bit of brass matter, whether you reload or not. Things that would have gone to the scrapyard at best 3 years ago, suddenly now have value. This can be a real problem if you train with dynamic movements, or in terrain that isn’t a flat range. Trying to recover rifle brass over a couple of hundred yards in knee-high grass is a fool’s errand. Which led me to test something I never thought I would.

Brass catchers aren’t exactly new, even in military circles. US soldiers often mock ROK soldiers for using them, at least until it is time to clean up the range. I would never have considered one before this crunch because I assumed they threw the balance of the rifle off. Well, I’m not too proud to admit when I am wrong. For a test item, I picked the first one I saw on Primary Arms. It is an SME (Shooting Made Easy) brand, and I should have known Texans would figure this out. It is so light that you don’t even notice it, and it works like gangbusters.

The SME brand attaches to your Picatinny rail, a solid lock up. It has minor adjustments for moving it front to rear, and closer or further from the ejection port. Set up was simple, and from out of the box I was shooting in under 5 minutes. The mouth of the SME bag is wide, which allows it to work on small or large frame AR’s. This is a much better setup than older brass catchers that used straps.

I wanted to give the SME an obscene test in both recoil and capacity, so I put it on my Craddock Precision 7.62×39 pistol. I figured that 60 rounds of larger steel case in the bag would be a good test. I was wrong on that. My test should have been closer to 120. The capacity of the SME pouch is bigger than you would first assume. And I was very surprised that I still didn’t even really notice it with 60 steel empties in it.

Once you are done, the large zipper at the bottom makes it easy to empty into a bucket or can. No muss, no fuss, and it eliminates the need to hand separate calibers. I was very happy with the results, and that it induced zero malfunctions. I had an idea that perhaps catching the brass made it more likely to bounce back into the receiver. That proved unfounded.

For any situation where saving your brass is called for, this is a great product. Be it reloading, ease of range clean up, or just not littering, this is an absolute winner. One I can highly recommend.