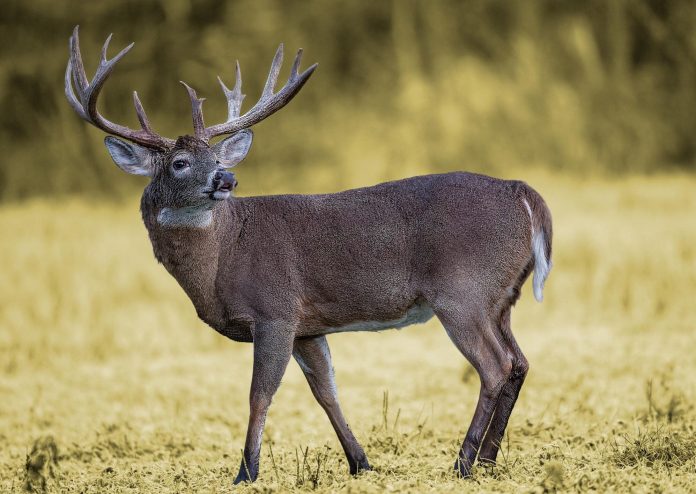 I HEARD THE DEER long before I saw them—their plodding footfalls through the leaves, their porcine grunts and chuffing, and then the sudden crack of a limb. For much of the year, mature bucks slip through their world like vapor; these sounded like a herd of feral swine on a panicked sprint.

It was the morning of November 5—my birthday—and I was in a panic of my own. The Iowa dawn had already broken, and I was standing at the base of my stand tree, still in the business of setting up, when an open-mouthed doe blazed past in easy bow range. On her heels was a tall 8-point buck. Then a heavy-beamed 10 trotted past so close I could smell him. I glanced at my bow, thinking I should nock an arrow in case the chase swung by me again. Finally, I sighed, scaled the tree, and hung my stand, with the rut mantra of one of my hunting buddies ringing in my head: “I’d rather be an hour early than a minute late.”

I have never killed a buck on my birthday. For many years this has kind of stuck in my craw, as November 5 is not only in the Holy-of-Holies month for whitetail hunters, but a date when the progression of the rut is about perfect for a Midwestern bowhunter.

Still, no birthday buck. I’ve tagged one on the fourth, and on the sixth, and on plenty of other days during my birthday week. I’ve also come whisker-close several times on my day, including by whiffing not one but two shots at a 150-class 10-point just an hour before my wife and kids had a birthday dinner and cake planned for me. Trudging home from the woods and through the front door, I put on my happy face just in time for someone to plunk a party hat on my head. Inside I was thinking, What’s a guy have to do? Well, shoot straight, obviously, but the shots I’d botched were makeable enough that I couldn’t help but wonder if there was some kind of hex at work.

I’d finished hanging my stand and had just put my bow on a hook when another doe bolted past, chased by an athletic young 8-point and a 3×3 that might have threatened Pope & Young. Then a 3-year-old 10 that looked like a for-sure future Booner trotted past as if he’d missed the best part of a parade. Years ago, I’d have been reaching for my bow for that last buck, but I’d seen enough of Iowa to know that waiting for a gagger is usually worth it. Though there’s more to it than holding out for a bigger rack. In Iowa, you never have to be in a hurry shoot, especially in November. There are so many good bucks, you have the luxury of just sitting back and watching deer—something I’ve always found endlessly fascinating—until one trips your trigger.

So I watched as the doe careened through a CRP field, darting behind clumps of brush to disappear for a few precious seconds, then accelerating to full speed in an effort to lose the trio behind her. This girl was good. The young buck was completely befuddled and dashed off toward a distant woodlot. The big 6 darted from clump to clump, looking for the doe behind each one. And the 10 acted as older bucks often do, standing firm and waiting for things to shake out. I stifled a laugh when I spotted the doe slipping behind an Osage orange tree on the far side of the field, her suitors clueless about her exit.

Watching chases is one of the highlights of November, and my favorite involved six bucks and one old matriarch that came bombing down the creekbottom funnel under my stand. The grunting behind her was so loud and urgent that I didn’t recognize it as a whitetail sound until I saw the bucks. At least two were no-doubt shooters, and I stood immediately and grabbed my bow. But there was never any hope of a shot with the doe zigzagging through the timber like a cutting horse and the bucks mirroring her every move. A biologist once explained to me that a whitetail’s front shoulders are not attached to the rib cage with anything but muscle and cartilage because they would break bones from the hard running and leaping they do, and that came to mind as I watched that chase.

After several minutes of open-mouthed running, the doe jumped into the knee-high creek and ran downstream for 50 yards as the bucks followed on the bank. When she leaped back up onto the far bank, the bucks splashed in and crossed into the opposing timber. The group ran and dodged and finally circled back toward me, and then, at full speed, that doe took a dock-dog leap off the creek bank and into the water. She bolted upstream toward me and skidded to a stop to tuck herself under an overhanging bank, panting while she knelt in the water. One by one, the bucks came to the bank, looked up and down the stream, and, seeing no trace of the doe, filed off to find another. It was the greatest act of evasion I’ve ever seen.

Thinking of that, I eased back onto my stand seat and noticed that the sun was just coming over the Iowa treetops. I’d already seen five bucks, and the day was just getting started. I love morning hunts during rut. Over the years, I’ve discovered that after an initial rush activity, the good stuff usually starts happening about two hours after sunup. I took a deep breath and settled in, my gaze falling on my rattling antlers hanging from an eye-level branch.

I’ve seen some brutal buck fights from a treestand in November, and with that in mind, I stood up and grabbed my horns. But before I touched the tines together, I heard a twig snap behind me and spotted a white rack weaving through dense honeysuckle. A 2-year-old 9-point with tall, slim tines emerged, followed by a basket-racked 6. I was now up to seven bucks, and it was barely midmorning.

Sometimes, when the rut is really popping, the best bucks don’t show until the middle of the day. My friend Don Kisky believes this is because after chasing does all night, older deer lay up during the early morning, get a second wind, and then start moving again. As Don likes to say, “You sure won’t see as many deer from 11 to 2, but you may see the right deer.”

While I waited, I wondered again about my birthday jinx and what the right deer would look like for me exactly. I had, admittedly, gotten a lot pickier over the years, to the point that my buddies rib me about the bucks I pass on. They have a point, but they’re also missing something I find hard to confess: While I’m happy to wrap a tag around a great set of antlers, when it comes down to it, I’m mostly here to take in the show.

I must have been staring at the CRP field as I daydreamed, because what brought me to was the sight of a wide, ivory rack crossing through the tall grass. I stood up and clacked my rattling antlers twice, then hung them back up immediately. I knew the buck was coming before he pointed a shoulder in my direction. I had my bow in my hand when he bristled up and started stiff-legging it toward me. He was no world-beater, but he was plenty good, with an 18-inch spread and heavy beams. His tines weren’t long, but I stopped counting at 13, and the buck was doing his best to look huge and intimidating, his hair erect from nape to rear, ears pinned and nostrils flared.

I hit full draw and settled the sight pin behind the buck’s shoulder. All I had to do to end my birthday hex was squeeze the release trigger. He was standing still at 15 yards and slightly quartering away, looking for the fight he’d heard. He wouldn’t be the biggest buck I’d killed with a bow, for sure, but probably in the top 10. Finally, he flicked his tail and slowly disappeared into the honeysuckle. Noon was still a full hour away, and I’d already watched nine bucks move into bow range. Most likely, the show wasn’t over.

Supermarket Food List: How To Prep Your Pantry for Survival