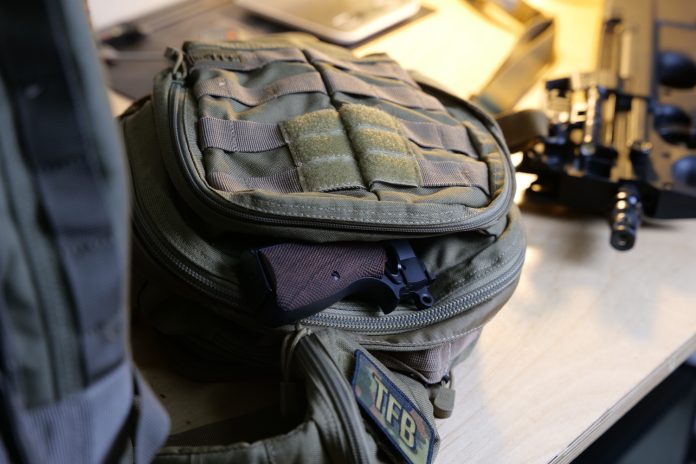 5.11 has an extensive catalog that can be intimidating. Many items come and go – some are absolutely fantastic and some aren’t missed – but there are five specific staples that I have used for years which I recommend without reservation. Even several TFB writers and editors have given in to my repeated endorsements of the five below, and are now themselves converts. 5.11 is having their annual Black Friday sale, which means you’ll be getting up to 40% off of select items today. Maybe some of these will be on the list. Whether you’re picking up something for a spouse, your cameraman, something from your favorite tactical OnlyFans operator’s wish list, or for yourself (you definitely deserve it by the way…unless you are a TFB Disqus commenter), here’s the gear that has made me a believer after extensive use.

If you’d rather do your own thing, here’s their holiday gift guide that just went live on 5.11’s page.

Defender Flex pants in Oil Green at the URNA counterterrorist training facility in the Czech Republic.

I’ve worn the Defender Flex pants and jeans since their introduction, probably. I’ve even had the privilege of wear testing them for 5.11, and mine have clad these cheeks from New Orleans to Belgrade and back. Not only do they look good but they feel great too. It doesn’t quite look like it, but the D Flex have a lot of stretch (ergo, the “Flex”), meaning they are great on the range, or hiking, or any activity where a rigid, 100% cotton denim would slow you down, hinder your movement, or just chafe. Perhaps my favorite feature is the two inner pockets that are high and tight on the seat. They don’t add any bulk to the D Flex if they are empty, but they are extremely useful when filled. Because of how high the pockets sit, near the waistband, they can support a surprising amount of weight. They’re also slightly forward so they don’t completely overlap with the rear pocket. These utility pockets don’t detract from the D Flex lines, and they are perfect for stashing a cell phone; when you sit down, you’re not sitting right on your phone. Even better, each pocket can hold a fully loaded AR-15 magazine. No sore ass and no broken glass. And again, you won’t even notice the contents as the weight is distributed across the beltline. It’s amazing – you can have a mag in your gun and two in your pockets with no extra gear and no mobility penalty. Finally, the flex means it’s easy to carry a pistol inside the waistband without having to buy a size up, and without pants claustrophobia. I wear the D Flex jeans in darker washes to the office occasionally and they get compliments. The compliments are from Susie, the septuagenarian cat lady from AR, but still, compliments. Bonus perk: make babes swoon? The Defender Flex pant in the Czech woods.

The Defender Flex jeans and pants I own have held up very well. My oldest pair is about 5 years old, and has some slight pilling of the decorative stitching on the rear pockets. I’ve also finally worn small holes in the knees from working on gravel ranges, but they otherwise still look great, feel good, and function as designed. I’m probably going to get them patched and see how far they can go.

I know pants aren’t as sexy as a new buttstock or an optic mount, but these are perhaps my favorite 5.11 item, if not my favorite clothing item of all time. Kicking it with the Norris high in Lucerne, Switzerland. A close second would be the Norris high sneaker. I call these tactical Chucks, though they really look and feel closer to Sk8 Hi Vans than they do the deconstructed classic Converse. These are shoes that I’ve also had from around the time they first came out – I found email orders from 2019 – and I haven’t busted a pair yet. Ryan, TFBTV camera guy/co-host extraordinaire, still wears possibly one of the first pairs off of the assembly line. They look worse for the wear, but he’s still Norrissing all over the place in them. They look great and provide excellent ankle support. Grippy Vibram soles give Goodyear-level traction. Oh, and they are ASTM certified for puncture resistance with a Welmax board embedded in the sole that resists up to 1,200 newtons of force. The Norrises in Germany on family vacay – I walked 120+ miles in ten days wearing this pair.

5.11 says these are popular with undercover units because they provide all the capability and protection of a tactical boot while looking like any other common hi-top. As what might be a surprising bonus, while these aren’t as cushy as running shoes, I walked nearly a quarter million steps in ten days through Europe with them – about 126 miles. You can read that full review here. The Norris/Defender Flex/Mk18 combo. Name a better trio, we’ll wait (except for chip/salsa/guac, obviously the most legendary triumvirate of all time).

How many beers fit into a RUSH 24? The answer might surprise you:

I don’t go to the range without the RUSH 24. I think the RUSH 24 – now that the 2.0 version exists – might be one of the best backpacks that you can buy, dollar-for-dollar. I don’t use it much for travel: Frankly, I don’t like bags that are covered in MOLLE. This is just as much a style preference as it is an issue with possibly raising your profile (“Yep, that guy’s got a concealed handgun and a Spartan helmet tattoo somewhere”). 5.11 does indeed make some more discrete bags, but I don’t think any of them have the same utility as the RUSH 24.

Side note: I wish 5.11 would consider making a slick version of the Rush 24 or the RUSH 12 with less MOLLE – or none.

It’s just about the perfect size, with just about the perfect amount of pockets. The 24 might be a little large as a daypack, so the RUSH 12 is an attractive option for shorter outings (or shorter people). I never owned the original RUSH 24 because there was no separate laptop compartment, but that all changed with the 2.0: The 2.0 added a dedicated laptop compartment and a clandestine, Velcro-quick-access concealed handgun pocket on the outside. The abundant MOLLE on the exterior is undoubtedly great for duty use. I’ve got a double AR-15 mag pouch and tourniquet on the outside of mine, and a first aid kit on the inside along with eye protection, two sets of ear protection, a stapler, targets, sunscreen, bug spray, and other range ingredients. I love it for “””work,””” and if MOLLE doesn’t bother you, or you are looking for a bag for duty or just the office, this is one of the best options out there. Cheap, small, and functional: Don’t sleep on the RUSH MOAB 6. It’s a small sling bag – which is tactical speak for “murse.” But the MOAB 6 is a passable, semi-tactical murse that I’ve recommended to a lot of my no-gun friends who love it too. It’s great for an urban day bag or trip pack, like a long day away from the hotel or a morning on the trails. You can use it as a small range bag and it’ll easily stow a pistol or two (or three), plus mags, admin gear, ammo, your wallet and your phone. One of my buddies from college uses it every time he takes his kids to Disney. It works just fine with juice boxes instead of Glockses. On that casual level, it gives you just enough room to stow a water bottle, a rain jacket, some protein bars, a camera, SPF, some batteries, and room for other souvenir t-shirts and a small stuffed Micky. It’s even got a handy wallet/phone/tourniquet/Trident gum pouch with an elastic retention strap up front that’s accessible without swimming out of the bag. There’s MOLLE to lash mags or fruit roll ups on the outside for easy access. I’ve had mine for ten years – yes, the one in the pictures, and yes, I mean an entire decade – and it’s aging gracefully, just like its owner. Yeah, it’s beaten up and covered in cat hair, but thousands of miles and one year later, it still looks great.

The newest item I have from 5.11 in the James Reeves trust tree is the RUSH LBD Lima duffel. It’s the largest possible size where you can pack clothes and gear for a week overseas, but still cram it into an overhead compartment without worrying about the baggage handlers at Jomo Kenyatta International – or worse, Charles De Gaulle – losing your luggage (ask me how I know). It’s an amazingly handy duffel without much bulk – it’s hard to believe that this is a 1050D nylon bag, because it carries like a 600D (“D” referring to the denier; a metric used to describe what is essentially thickness or density of the material – most hiking bags start at 400D or 500D.) The Lima has a small exterior pocket that I like to put an AirTag in, but you can put other things you might need to get to quickly, or things you might want to hide, in this discreet pocket. The interior is one giant compartment except for the flap, which has two mesh pouches on the underside for lighter items that you don’t want to get mixed up with everything else.

I picked this bag up at the 5.11 store in Tampa during my Black Friday video last year:

I stuffed it full of clothing and Christmas gifts that I got for my family from the Florida store, flew it back with me to New Orleans, and now it’s our one-year anniversary, me and the Lima. At this point, the Lima has been with me across the country multiple times, to Serbia, the Czech Republic, Hawaii, and Italy, to Croatia, to Slovenia – the list goes on. I fly at least twice a month and the Lima goes with me on every trip because I hate hard-sided bags or rollers. The Lima is just the right size where you aren’t overloading yourself, even when the bag is full. Instead of rolling a bag around the airport (“uh oh, are those stairs?”), you can use the perfectly comfortable vented backpack straps to lug it onto the tarmac, up and down the jetway, into the overhead bin, and around your favorite Slavic nation. I like this bag so much that I bought a second one in the exact same size and color just in case this one ever dies. And I’m not sure it will. My entire life is flecked with orange tabby cat hair. That does it for my favorite items from 5.11. This isn’t a marketing puff piece, these are legitimate things that I use on a regular basis, the newest one being the Lima that I’ve had for a year, the oldest being the MOAB that I’ve had for over 10. They’ve all been TFB tested, and James Reeves approved.

How the US midterm elections could impact Indo-Pacific policy