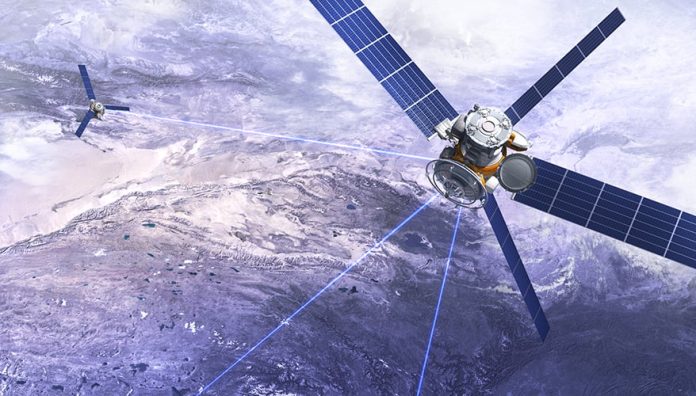 WASHINGTON — The Space Development Agency wants to include hosted payloads on its future data relay satellites that can provide an alternate to GPS positioning, navigation and timing services, but has yet to determine exactly how — something that officials are hoping industry responses to the agency’s recent request for information, due today, will help clarify.

“The goal is to proliferate a complementary PNT service that can augment DOD PNT users, providing enhancements to military GPS users,” Jennifer Elzea, SDA spokesperson, told Breaking Defense, meaning that users “could use both GPS and the SDA signal.”

What form that SDA signal would take has yet to be determined, Elzea explained, and is subject to a number of tradeoffs — not the least of which are size, weight, power and cost (SWAP-C) considerations —  for fitting the payloads to the agency’s batch of Transport Layer satellites due to be launched in 2026, called Tranche 2.

Tranche 2, numbering some 250 satellites, are planned to provide users with global access to the Transport Layer, which is being developed as the satellite communications backbone for the Pentagon’s Joint All Domain Command and Control (JADC2) concept. Overall, SDA is looking at orbiting a mesh network of more than 500 Transport Layer satellites connected to each other via laser links, as well as directly to weapons platforms via various types of downlinks.

In recent years the military has been exploring alternatives to GPS, under the assumption that in a future conflict it will operate in contested environments where GPS signals might be jammed, or the satellites beaming them down to soldiers would themselves come under cyber or kinetic attack.

“SDA is considering signals different to GPS, but offered within the same frequency bands. If SDA’s military PNT service is located within the existing GPS frequency bands, it will minimize integration cost of new antenna systems on terrestrial weapon systems. We are investigating multiple use cases to determine the greatest impact to the warfighter,” Elzea said.

Another question is whether the payloads should carry the highly encrypted M-code signal, a more powerful signal to help military users overcome jamming and protect against false GPS signals being used to spoof users by misdirecting them. The Space Force has been struggling to deploy the ground system required for managing use of the M-code on current and future GPS satellites, and the Defense Department has been bogged down for decades in fielding radios and other devices across the services that can access it.

“M-Code is a consideration, but the exact signal and its features has not been decided. SDA is investigating other signals as well,” Elzea said.

SDA further is testing out alternate PNT technologies, as well as other high-risk experimental payloads, under its National Defense Space Architecture Experimental Testbed, or NExT. The agency last month awarded Ball Aerospace a $176 million NExT contract for development, manufacture, deployment, launch, and operations of a set of 10 space vehicles and mission-enabling ground systems, set to fly beginning in 2024.

The NDSA comprises seven layers of capabilities, both on orbit and on the ground. It includes not just LEO satellites that SDA itself is designing and launching — such as the Transport Layer and the Tracking Layer of missile warning/missile tracking satellites — but also capabilities to integrate and fuse data from other military satellites, as well as commercial constellations.