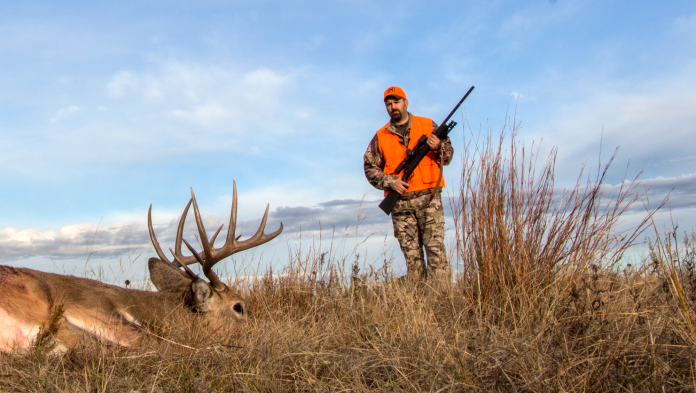 The year was 1979. I’d saved up $210 from my paper route and Dad took me to buy my first deer rifle. I had to borrow a few bucks from Dad for the scope and rings, but I walked out of the sporting goods store with a Remington 700 for $208.00. Had I not traded that rifle for another—that I now can’t even remember—I’m sure it’d still be killing deer, which would have made it a damned good investment.

According to financial experts, in 1979, $208 dollars would be worth about $856 in today’s world. Since I bought my rifle during an after-Christmas sale, let’s just round that up to a grand and look at what kind of deer rifle we might get for that kind of cash in 2022. Hunters complain about how much deer rifles cost, but you might be surprised at what you can find for less than $1000. Here are nine nice deer rifles that cost about the same or even less than a good deer rifle did 40 years ago.

The Mossberg Patriot Predator rifle has been around a while, but for 2023 it will be chambered for the 7mm Precision Rifle Cartridge (PRC). This cartridge was designed by Hornady and falls between their 6.5 PRC and 300 PRC. It’s a long-action rifle cartridge that can launch a 175-grain bullet—with a BC of 0.689—at 3000 fps, which gives it about a 120 fps advantage over the best 7mm Remington Magnum loads.

But the real secret to the 7mm PRC is the specified 1-in-8 twist rate that allows it to use bullets with extremely high BCs. Combine this performance with the 6½ -pound, 24-inch barreled, Cerakoted Patriot Predator, and its three-shot detachable magazine, and you have a fantastic long-range big game rifle. It’s available in flat dark earth for around $519 or True Timber Strata camo for around $619.00.

Brush-busting deer rifles have a special appeal to eastern hardwoods hunters. They typically still hunt their whitetails and push them out of laurel thickets or grown-over clear cuts. For that type of hunting, you need a light, fast-handling rifle. At 5.5 pounds, Ruger’s American Ranch rifle in 450 Bushmaster fits that calling. Features include a thick butt pad to dampen recoil, the Ruger Marksman Adjustable trigger system, a threaded muzzle with a brake, a detachable magazine, and a one-piece aluminum scope rail installed at the factory. It has a suggested retail price of $659.00.

Compact hunting rifles are wonderful things. They’re easy to maneuver in a blind, easy to snatch out of a vehicle, and a pleasure to carry. Browning’s AB3 Micro Stalker is a shot-action, bolt-action rifle available in .243 Winchester, 6.5 Creedmoor, 7mm-08 Remington, and .308 Winchester. It has a 60-degree bolt-lift for fast cycling of the action, a bolt-lock override button, and a five-shot detachable magazine.

What makes this rifle so compact is its 20-inch barrel. Yes, a shorter barrel will rob you of a bit of velocity, but it will not be enough to negatively impact the external and terminal ballistics of any of the four cartridges above if you’re shooting at sensible distances. With the AB3’s weather-resistant, black composite stock that’s capped off with a Pachmayr Decelerator recoil pad, this rifle weighs in at only 6½ pounds. The suggested retail price is only $699.

The CVA Cascade has been around for several years but for 2022 it has received a new Veil camo pattern option on its fiberglass reinforced synthetic stock which also has a soft-touch finish. The butt of the stock can be adjusted for length of pull by way of removable spacers, which makes this a great rifle for a young hunter to grow into. The Veil camo version of the Cascade has a 4140 carbon steel barrel, and the barrel and action have a Cerakote finish. The bolt has a 70-degree throw, the action is fitted with a two-position safety, and it feeds from a flush-fit, four-round, detachable magazine. Adding a riflescope to the Cascade is easy. It will accept any scope mount that will work with Savage 110 AccuTrigger rifles. Ten popular chamberings are available, including the 450 Bushmaster and the 350 Legend. The suggested price is $745.

Hunting with suppressors is becoming more common. The problem with many suppressor-ready rifles is that the manufacturers simply thread the barrel of an existing model. This works but when you add a suppressor to a 22- or 24-inch barrel, you end up with an unwieldy rifle that’s hard to maneuver in a blind. The Suppressor-Ready XPR Stealth from Winchester solves this problem with a short, 16.5-inch button-rifled, free-floated barrel. It’s threaded with a 5/8 x 24 pitch (11/16×24 for the 350 Legend) from the factory. The Steel receiver has a Perma-Coat finish, and the rifle comes with a Talley Picatinny rail. The rifle also features a two-position safety and a neat bolt-unlock button. It has a green composite stock and is available in 10 chamberings from .223 Remington to .300 Winchester Magnum.

The Howa Kuiu is a very attractive,  compact rifle. It’s only 40½  inches long and weighs between 7.0 and 8.0 pounds, depending on the chambering. The rifle is fitted with a tastefully camouflaged, Hogue pillar-bedded rifle stock, that has either the Visa 2.0 or Verde 2.0 pattern and a hinged floor plate.  The Howa Kuiu is offered in a wide array of cartridges from .22-250 Remington to the .300 Winchester Magnum. The 22 or 24-inch barrel and action are finished in Tactical Grey Cerakote, and like all Howa rifles, the Kuiu comes with a three-position safety. All  Howa Kuiu rifles also come with a threaded muzzle.

The M18 is offered in nine chamberings, from .223 Remington to .300 Winchester Magnum, but regardless of the chambering, the three-lug action size is the same. The bolt has a 60-degree lift, an oversized bolt handle, and a three-position safety that locks the bolt in the most reward position. The action is outfitted with a threaded, cold-hammer-forged 22-inch barrel (24-inch for magnum cartridges), and it rests in a very attractive, tan-colored synthetic stock that has soft inserts at the grip and forend. The stock even has a unique storage compartment in the rear. The trigger on the M18 is adjustable, and the rifle comes with a sub-MOA precision guarantee. With a suggested retail price of only $850, this rifle received the Best Budget Rifle award in our 2022 rifle test.

The 22- or 24-inch 4140 chrome moly barrels for these rifles are built in Bergara’s barrel factory in Spain. Bergara then screws them into a two-lug action that features a bolt with a sliding plate extractor and a coned nose to enhance the feeding from either a detachable magazine or an internal magazine with a hinged floor plate. All steel surfaces on the B14 are finished with a graphite black Cerakote finish, and each rifle is fitted with a Bergara Performance Trigger. The soft-touch synthetic stock has molded-in steel pillars that enhance stability, and the rifle is available in nine popular chamberings from .22-250 Remington to .300 Winchester Magnum. The Bergara B14 Hunter accepts Remington 700 scope bases and has a suggested retail price of around $900.

During our 2022 Rifle Test this rifle turned in an average group size that was less than 1 MOA. It has a free-floated, light contour, 22- or 24-inch barrel, a single-stage adjustable trigger, a threaded muzzle and brake, and it ships with a one-piece scope rail. All the metal surfaces have a Cerakote finish and the rifle’s stock, which has a unique shape with integral sling attachments, comes with either a Truetimber Strata, Realtree Escape, or Gore Optifade Elevated II camo finish. The rifle feeds from a single-stack detachable magazine and is chambered for either the 6.5 Creedmoor, 6.5 PRC, .308 Winchester, .300 Winchester Magnum, or 350 Legend. This rifle also comes with an MOA precision guarantee and a seven-year warranty.

The Perfect Long-Range Rifle Setup for Shooters on a Budget

You can make just about any centerfire rifle suitable for extended range, just add an appropriate riflescope. But if you want to get serious about lobbing bullets into the next county, you’ll need a serious rifle to go with your glass. You can go out and spend a small fortune on long-range shooting gear. But, if you’re just looking to get started, here’s a capable setup that will cost you less than $ 1,500.00. Relatively speaking, that’s a heckuva bargain.

The rifle gets all the attention, but at long distances your sight matters more. The new Bushnell Engage riflescopes offer the mandatory long-range features and good glass at a fraction of what you’d expect to pay. With its flawlessly repeatable adjustments, the less than $300.00 2.5-10X44mm Engage will work splendidly. If you feel you need more magnification the 3-12X or 4-16X Engage can be had for just a few dollars more. They all have the excellent MOA Deploy reticle, protected and resettable ¼ MOA turrets, a 30mm tube, and a parallax adjustment.

Your rifle must shoot flat and be accurate, too. Browning’s X-Bolt Hell’s Canyon Long Range is available in eight flat-shooting cartridges and the suppressor-ready, threaded muzzle comes out of the box with a removable brake. This drastically reduces muzzle jump and recoil, allowing you to handle the punch of a .300 Winchester Magnum, while watching bullet impact at extreme distance. We tested this $1,200.00 rifle in 6.5 Creedmoor. It consistently turned in sub-MOA five-shot groups and we repeatedly rang an eight-inch gong at 700 yards.

This rifle has an adjustable trigger, a hand-chambered free-floated barrel, a short-throw bolt with an unlock button, and a detachable rotary magazine. It looks sleek and elegant, and it unequivocally proves that for precision at distance, your rifle does not have to look like it just auditioned for a Transformers movie.

Ammunition matters, too. It must be loaded with sleek and streamlined bullets; accept nothing without a ballistic coefficient (BC) of 0.500 or higher. Bullets like these reduce flight time and flatten trajectory because they have less drag. That also means they arrive on target sooner, with more energy, and less wind drift. Hornady’s Precision Hunter ammo is where to turn and its available in every cartridge the Hell’s Canyon Long Range rifle is chambered for.

Modern manufacturing techniques have had a positive impact on rifle accuracy in recent years. It is possible to buy a rifle that shoots sub-MOA groups for well under $1,000.

Many of the rifles above would make a good deer rifle for a beginner. Bolt-action rifles in general are good rifles for beginners because they are simple and safe to operate, and it’s easy to see when they are loaded or unloaded. Another thing to consider is an adjustable length of pull if the beginner hunter is still growing. This adjustment lets the shooter add length to the stock as they get bigger.

What is the best caliber for deer hunting?

First, caliber refers diameter of an unfired bullet, not a type of cartridge—like a .270 Winchester or .30/06 Springfield. When it comes to the best deer hunting cartridge, there is a lot to consider, like recoil, cartridge availability, bullet type, and the distances you plan on shooting. At the end of the day, what matters most is shot placement and terminal performance. If you’d like to learn more about whitetail cartridges, check out the 11 Best Rifle Cartridges for Whitetail Deer.