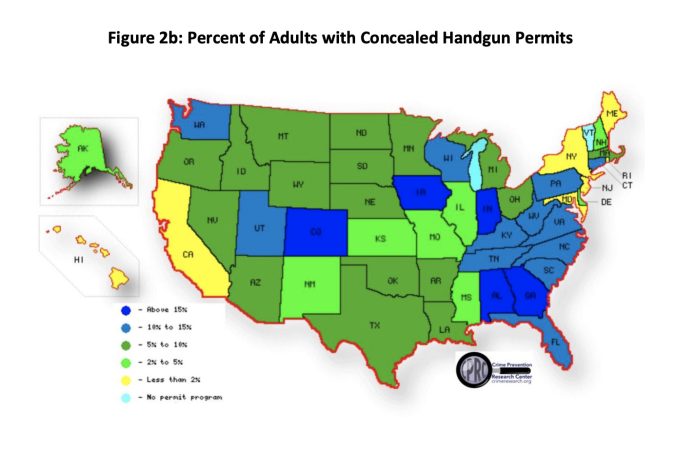 Every year the Crime Prevention Research Center releases a report on the number of adults with active concealed handgun permits in the United States.

Data collected in this year’s report showed the number increasing by 488,000, bringing the total to 22.01 million!

Below are some more findings:

■ Last year, the number of permit holders continued to grow by about 488,000. At 2.3% growth over 2021, that is the slowest percent and absolute increase that we have seen since we started collecting this data in 2011. Part of that is due to the number of permits declining in the Constitutional Carry states even though it is clear that more people are legally carrying.

■ 8.5% of American adults have permits. Outside of the restrictive states of California and New York, about 10.2% of adults have a permit.

■ In seventeen states, more than 10% of adults have permits. Since 2019, Arkansas, Oklahoma, and South Dakota have fallen below 10%, but they are now all Constitutional Carry states, meaning that people no longer need a permit to carry. The concealed carry rates for Connecticut, North Carolina, and Wisconsin have risen to above 10% this year.