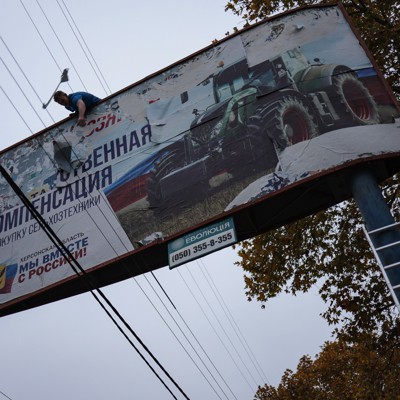 Lessons from Ukraine and changes in irregular warfare will be reflected in the upcoming revision of the Pentagon’s information-operations strategy, defense policy leaders said.

“Everyone has a cell phone; that’s what we’re seeing in the Ukraine. Not just soldiers having cell phones and watching the Javelin strike. Civilians are reporting the movement of Russian forces,” said Maj. Gen. Matthew Easley, a top information-ops advisor to the assistant defense secretary for special operations.

Among other things, Easley said, this means special operators need to be thinking about public narratives—how they might change and how U.S. forces can shape them—long before fighting erupts. And that means ensuring that troops have the right digital skills, including data analysis and messaging.

“Our information operators and forces must engage throughout the spectrum of operational planning and execution, and cannot wait until a crisis begins to start setting the theater for messaging,” the general said Friday at the National Defense Industrial Association’s Special Operations/Low-Intensity Conflict Symposium in Washington, D.C. “We must reinforce campaign planning to start with objectives in the cognitive domain. Understand what narratives are needed to reinforce those objectives, and then develop plans for physical action that show commitment to that narrative.”

The new strategy, required by the 2020 defense policy act and slated for publication in March, will update the 2016 version, Easley said. A joint info-ops doctrine was published in 2018.

It builds on several sweeping tech policy efforts the Pentagon is working through, including cyber, data, and digital modernization strategies. It will have four lines of effort with an emphasis on personnel training needs and force design. That also means doing a better job integrating information operations, he said, noting the U.S. Marine Corps’ Information Groups as an example.

Other lines of effort include building programs that enhance information operations, such as cloud-based infrastructure and data analytics; creating effective policies and governance; and maintaining partnerships. In a 2021 report, the Government Accountability Office found that DOD was deficient in its leadership and integration for information operations.

The strategy also comes as the Defense Department works to improve its overall irregular warfare doctrine.

“So everything that we built over the last 20 years looks at trying to dissuade that local population, from the local actors that we don’t align with or that have interests that differ from ours. And we’re kind of past that,” Tilley said. “Proxy warfare is not going anywhere. And whether it’s Europe or whether it’s the Pacific it’s going to be back and we need to have a better understanding of how our partners and allies are going to fight.”

The war in Ukraine has provided a “crash course” on the current state of irregular warfare and how the information space is used. But defense and intelligence communities have struggled to identify the “will to resist” in proxy, surrogate, and allied populations, Tilley said. And that has to change should similar conflicts arise in the future.

“We don’t have a good track record of trying to identify this will to resist in these proxy and surrogate and allied populations,” he said.

“This cognitive domain of understanding will someone fight or will they not is qualitative analysis. But I think the private sector is pretty good at it,” Tilley said.

“Look at marketing. That is qualitative analysis. What makes people drink Coke, what makes people drink Pepsi? And how do you market to those individuals? I think the private sector has used the information domain through marketing to the Nth degree because that’s how you make money. That’s how you’re profitable. And I think we as a department and in the national security enterprise, need to be able to pull some of those lessons.”