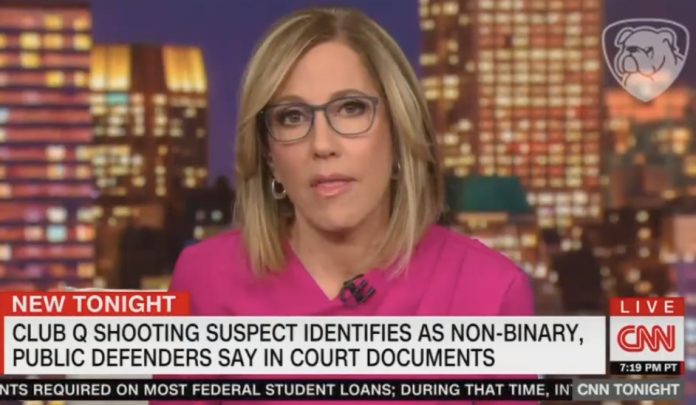 CNN anchor Alisyn Camerota was apparently shocked to learn that the suspect in the nightclub shooting over the weekend in Colorado Springs is non-binary, also known as genderqueer.

“They use they-them pronouns, and for the purposes of all formal filings, will be addressed as Mx. A******,” the court document reads.

CNN Political Commentator Errol Louis chimed in, “It sounds like they’re trying to prepare a defense against a hate crime now. That’s the least of his (sic) problems now, legally speaking.”

The defendant is accused of shooting 19 people in the attack at Club Q, an LGBTQ+ nightclub, on November 19-20.

Five of the victims died during the melee. They have been identified as Raymond Green Vance, Kelly Loving, Daniel Aston, Derrick Rump, and Ashley Paugh.

The suspect now faces five counts of first-degree murder and five counts of a bias-motivated crime causing bodily injury, and at least 10 other felonies according to the El Paso County Court’s online docket.

Users on Twitter were quick to criticize CNN, suggesting that this latest development bucks the network’s desired narrative that the perp is a right-wing radical.

Now that the shooter is known to be non binary & goes by they/them pronouns it changes the narrative of the Right wing shooter driven by hate by Right wing rhetoric. Instead of just reporting the new developments it’s openly mocked & dismissed. The narrative must stay on course

They start to say that he’s just pretending he’s non-binary to get a lighter sentence .. until they realise that’s considered a ‘transphobic’ comment that they blame the ‘far right’ for using, which they’ve just spent two days saying is what motivated the killer

What are your thoughts about CNN’s coverage?

How a simple Door Wedge can Protect your Home