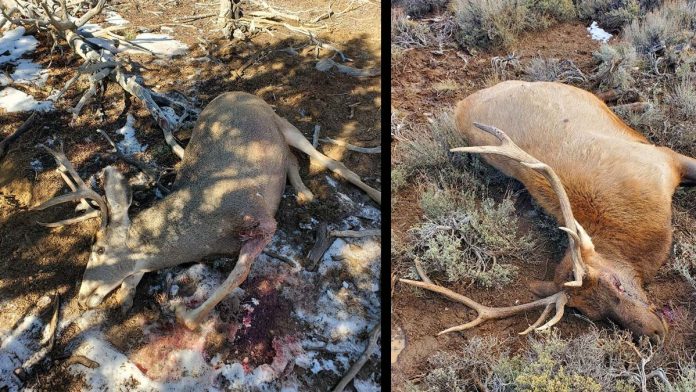 “All of these animals were found shot and left to waste. This is an egregious violation of Colorado’s laws surrounding hunting and fishing, which require hunters to prepare game meat for human consumption,” said CPW Area Wildlife Manager Rachel Sralla in a press release.

The incidents are believed to have taken place between October 30 and November 15. It’s not clear how many poachers were involved, nor if the cases are related. Southwest Colorado is considered a hotspot for elk and muley hunting.

“In any activity that people enjoy, most of the time things go well and the participants behave in the appropriate legal, moral, and ethical manner,” said CPW District Wildlife Manager Mark Caddy. “Sometimes, however, there are one or two people who show up and act in a manner that no one inside or outside of the activity can condone. Evidently, these types of individuals showed up in GMU 70 during the recent hunting seasons.”

Read Next: Watch a Massive Bull Elk Take a Fatal Fall After Tripping Over a Fence

CPW officials collected evidence at the scenes of the suspected poaching incidents and are currently investigating them. They are asking the public for assistance in solving them and for anyone with pertinent information on any of the incidents to contact them. CPW accepts anonymous tips through Operation Game Thief, which pays rewards of up to $1,000 to citizens who turn in poachers.

“The initial information on each animal in these cases came from hunters in the field who took the time to call and report that something was going on,” Caddy said. “These ethical hunters are as concerned about this happening as we are.”

FieldEarz™: Next Generation Hearing Protection and Enhancement for Hunters