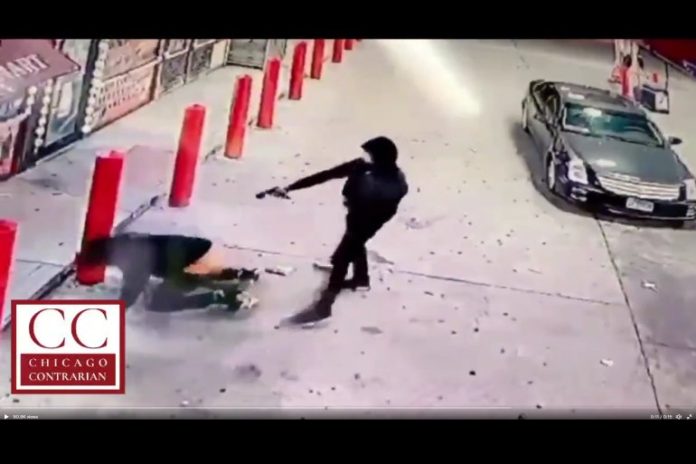 Murder City, USA has long been recognized as America’s largest open-air shooting range.  With police effectively prohibited from chasing suspects, along with politicians, prosecutors and courts that refuse to hold bad guys accountable, it’s easy to see why the streets now belong to the criminals. Now, a just-released video shows just how bad things have become.

In the video, an apparent gang member pulls a gun on another man leaving a convenience store. The Cadillac owner had just paid a king’s ransom for a few gallons of gas when the attacker approaches with a gun.

It looks like any other carjacking until the perp opens fire and chases down the car owner while shooting him over and over. And then a few more times for good measure.

Caution: Not safe for work.

To gangs, murder is a form of fun.

Gangs in Chicago will remain unbeaten until law and order prevails. pic.twitter.com/bELy7HmbTM

Here are six clear indications that progressive apologetics have undermined public safety, with the toxic effects most deeply felt in Chicago’s black communities.

Blacks make up three-quarters of the victims of homicides and non-fatal shootings in Chicago. These are the real victims of “progressive” politicians’ defunding, decarceration, zero bail and non-prosecution policies.

But the city’s mayor, Lori Lightfoot, saves her righteous indignation not for the 656 Chicago homicide victims that have been cut down under her watch (or the 2692 people maimed in non-fatal shootings), but for five dead in Colorado Springs.

Chicagoans are increasingly on their own in a city with a feral criminal population. The more they vote for politicians like those who have put these policies in place, the more chance they stand of becoming their victims.

How to Survive North Korea in 7 Foolproof Ways