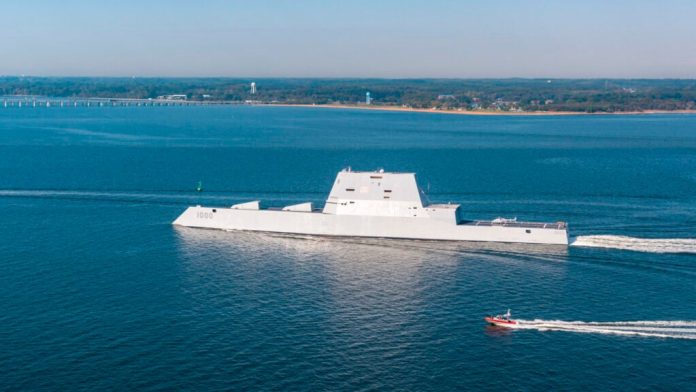 WASHINGTON — The US Navy is eyeing a new improvement program focused on swapping various components from the Zumwalt-class destroyer to make the warship have more in common with the rest of the surface fleet, the latest potential changes for an expensive program already under the congressional microscope.

The service’s chief ship acquisition agency, Naval Sea Systems Command, initiated the nascent idea, dubbed the Zumwalt Enterprise Upgrade Solution, or ZEUS, with a public request for information to industry on Nov. 17, just days after the Navy was celebrating the Zumwalt’s (DDG-1000) first successful employment, during which it visited both US 3rd Fleet and US 7th Fleet.

“Potential elements being considered in the upgrade” include the Surface Electronic Warfare Improvement Program, the undersea warfare combat system SQQ-89 and the Cooperative Engagement Capability, a capability that effectively communicates data between the ship’s radars and the fire control systems, according to the Navy.

The service’s notice also says the Navy is assuming changes to the ship’s topside design will be minimal, if anything. The warship’s mission will remain surface strike, and the Zumwalt’s SPY-3 radar would be replaced with the SPY-6 (v)3, both of which are made by Raytheon. Responses are due Dec. 16.

Requests for information are inherently tentative by design, meaning the notice’s publication does not necessarily mean the warship will undergo any changes. Nonetheless, the service’s interest in swapping components at this stage of the ship’s life is significant because of the number of high-profile changes the program has already undergone.

The three-ship class has been a target of congressional scrutiny due to several high-profile mishaps such as cost overruns that forced the service to reduce the class size from 32 down to three as well as scrapping the ship’s signature ammunition, a precision guided naval artillery shell, over how expensive each shot ended up being.

Part of why any system changes for the Zumwalt would be consequential is the program’s stage of life. Just last week, the ship’s commodore, Capt. Amy McInnis, was telling reporters about her crew’s successful first employment in US 3rd and US 7th Fleet.

“Zumwalt’s historic employment successfully [demonstrated] how we integrate the DDG-1000 class into fleet operations,” she said. “It was critical for the class and we learned a lot of lessons.”

That a ship, which has already gone through a number of costly modifications, would begin considering further design changes after only recently seeing its first employment is sure to attract unwanted attention from lawmakers considering future Pentagon budgets. It is too early to say how much funding — taxpayer dollars — the service plans to spend on the program. The Navy in its public notice simply says, “No estimated cost or price is requested at this time.”