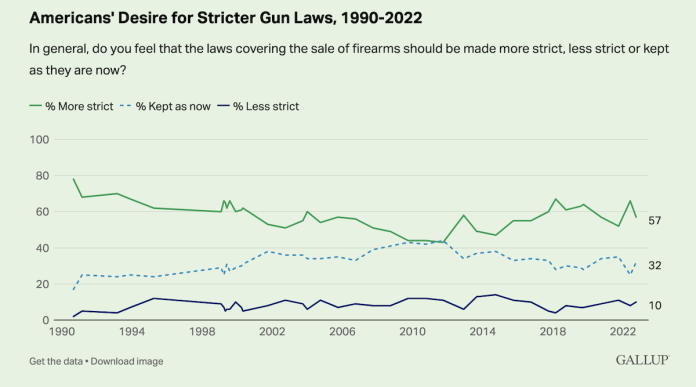 Gallup this week released the results of its poll on gun control conducted Oct. 3-20.

Back in June, Gallup found that 66% of Americans wanted them to be made more strict, but that poll was conducted in the wake of the mass killings in Uvalde, Texas, and Buffalo, New York when emotions were at high.

As Gallup observed about the trends:

Americans’ calls for stricter gun laws have fallen since June, when back-to-back massacres in a grocery store and a school resulted in an increased appetite for gun control. This pattern, whereby public support for tougher gun control spikes after prominent mass shootings and falls back as the memory of them fades, has been evident historically in Gallup polling.

When it comes to dividing up the question along party lines, the results were that 86% of Democrats, 60% of independents, and 27% of Republicans want stricter laws.

Gallup also inquired about household gun ownership. Thirty-three percent of Americans said they personally own a gun and 46% admitted to having a gun in their home or elsewhere on the property.

What’s interesting about the gun ownership trends from Gallup is that they seem to not fully account for the COVID-19 pandemic gun boom when millions of Americans, from all walks of life, purchased firearms for the first time.

Considering that there are approximately 200 million adults in the U.S., one would expect those percentages in the Gallup poll to reflect at least a 6-7 percent increase in gun ownership by 2022 when compared to 2019.

But that’s not what Gallup is reporting.

What gives? Perhaps not everyone is willing to confess to a Gallup pollster that they are exercising their 2A rights to keep and bear arms.

What are your thoughts? Do you trust Gallup’s results?

How Do Compost Toilets Work?