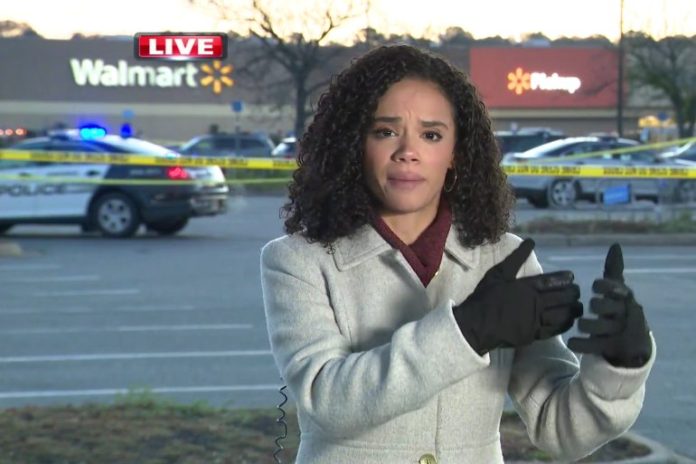 Reports say a Walmart store manager in Chesapeake, Virginia went off the deep end and began shooting people inside the store last night. The shooter used a handgun to kill six and wound a number of others before being shot and killed himself. WAVY reports the incident began in the back of the store during an employee meeting.

The first calls to 911 came in at about 10:12p Tuesday evening. Customers and store staff were both present in the store at the time. As one might expect, the shots caused pandemonium in the store as families and employees scrambled to run from the store.

Police later confirmed the killer was an employee of the store.

Authorities say 7 people, including the suspect, are dead following a mass shooting Tuesday night at a Walmart just off Battlefield Blvd. in Chesapeake, Virginia.

Police say there were multiple counts of both dead and injured found inside the building, where the shooting occurred. A greeter on duty at the time told WAVY the shooting started in the back of the store. One person was also found deceased outside the front entrance.

The call reporting the shooting came in at 10:12 p.m. Tuesday, when the Walmart Supercenter was still open to the public. Night shift workers had just recently checked in.

Chesapeake held an 8 a.m. news conference Wednesday with updates on the investigation.

Police Chief Mark Solesky confirmed the gunman was an employee at the store. He said the gunman used a pistol in the deadly mass shooting. The shooters’ next of kin has not been notified. They did not identify the gunman during Wednesday morning’s press conference.

Six people have died from their injuries; four remain hospitalized, Solesky said. The gunman died from a self-inflicted wound.

At least one witness believes the killer planned the murder spree, and began shooting from left to right.

.@AboutChesapeake Police confirms 7 people including the shooter are dead. This happened at the Walmart Supercenter on Sams Cr. The shooting call came in at 10:12 pm Tuesday. We’re working to learn how many are injured. The City is holding a briefing at 8 am. @WAVY_News pic.twitter.com/bklw2RYc3U