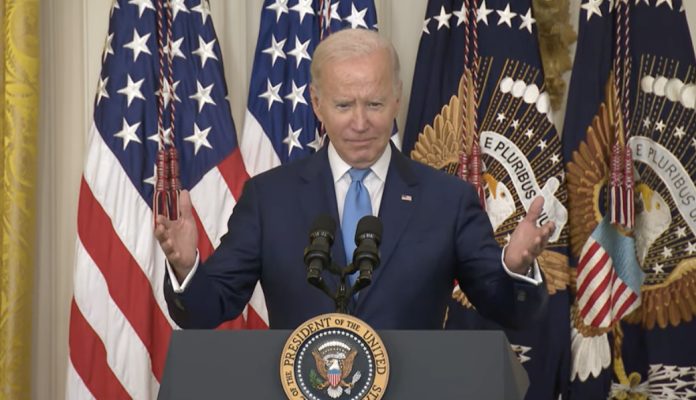 Joe Biden on Wednesday released a statement in response to the mass killing at a Walmart in Chesapeake, Virginia that left seven people dead, including the gunman, and six others injured.

“Jill and I grieve for those families, for the Chesapeake community, and for the Commonwealth of Virginia, which just suffered a terrible shooting at the University of Virginia this month,” said the president.

“We also mourn for all those across America who have lost loved ones to these tragic shootings that we must come together as a nation to stand against,” he continued.

The incident happened around 10 p.m. Tuesday night, when a Walmart employee, who was reported to be the manager, opened fire in a breakroom at the back of the store, according to The Guardian.

Police indicated the perp used a handgun in the attack. After killing and wounding the victims, the suspect took his own life. The entire ordeal only lasted minutes.

Biden suggested in his statement that more gun control is necessary to stop mass killers.

“This year, I signed the most significant gun reform in a generation, but that is not nearly enough. We must take greater action,” he said.

The “Bipartisan Safer Communities Act” is the legislation the president is referring to and it does all of the following:

But in this instance, even if there were no black rifles in the U.S., the killer would still have been able to perpetrate the attack, as he used a handgun — not a rifle.

In fact, what may be surprising to gun controllers, including president Biden, is that handguns (not ARs) are the “preferred” weapon of mass shooters.

By the numbers, handguns were involved in 75 percent of mass shootings between 1982 and May 2022, according to statista.com.

That’s not an argument for banning handguns, as not only would that be unconstitutional, but it would also render the more than 22 million concealed carriers in this country defenseless in the face of evil; evil like that homicidally deranged individual who shot his coworkers in that Chesapeake Walmart.

What pointing out that fact is meant to underscore is the futility of a ban on so-called “assault weapons” as a means to stop determined killers. We can’t gun-ban our way out of this problem, despite what the president claims.

But we can do is make sure those citizens, who are willing and able, have the tools they need to fight evil when it rears its ugly head.