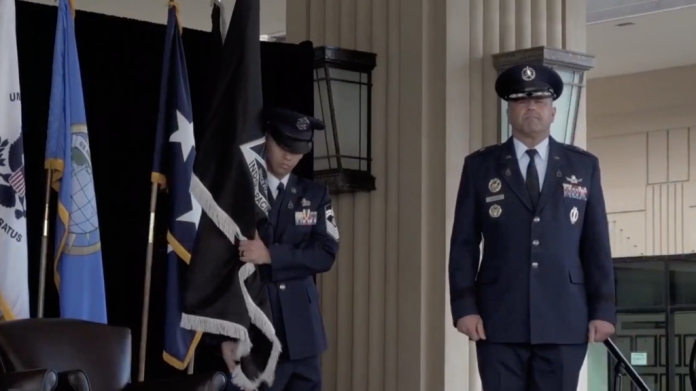 WASHINGTON — The Space Force on Tuesday activated its theater-level component command at Indo-Pacific Command headquarters in Hawaii, the first in a planned string of new Guardian components embedded with joint operations forces around the world.

That said, there remain some details to be hashed out about how these components integrate with theater command forces, other service component commands assigned to theater combatant commands, and, perhaps most importantly, Space Command itself.

“Today is just the first step in normalizing how US Space Force presents forces to the joint force,” said service chief Gen. Chance Saltzman during the activation ceremony for US Space Forces – Indo-Pacific. He warned the commander of the new service component, Brig. Gen. Anthony Mastalir, that “you still have a lot of work to do.”

Gen. DT Thompson, vice chief of the Space Force, told reporters prior to the event that Mastalir will report directly to the head of US Indo-Pacific Command, Adm. John Aquilino.

Mastalir will serve as a single point of contact who can advise Aquilino and his staff as to what space forces and capabilities are available not just from the Space Force, but also other organizations such as the National Reconnaissance Office, SPACECOM, commercial firms and US allies and partners, Thompson explained. In turn, he will then report back to the Space Force on INDOPACOM’s space needs and requirements.

Mastalir and his team of 21 Guardians “are going to work with the other components,” Thompson said, noting that they’ve since the beginning been working with Pacific Air Force to effectively integrate space with the airborne capabilities of the Space Force’s sister service. Before the Indo-Pacific component’s stand up, the Space Force and Guardians at INDOPACOM were actually being represented by the Air Force in that theater.

Now that the Indo-Pacific component is activated, the team “will take a larger role with the maritime forces, with the Navy with the Marine Corps, and with the Army” components at INDOPACOM, Thompson said, to ensure that all those service’s theater components “understand the capabilities available,” and that the Space Force understands “the things that we need to provide.”

Further, the component’s members will “participate in training and planning,” he added, as well as theater security cooperation activities with other nations in the region.

Mastalir foot-stomped the importance of that direct reporting chain during the component command activation ceremony.

“US Space Forces – Indo-Pacific is singularly focused on INDOPACOM, its priorities and objectives, which sets us apart from any other space organization on the planet or above it,” he said.

Air Force Secretary Frank Kendall last fall signed off on the Space Force plan to establish theater component commands, which are responsible for responding to operational combatant commanders’ requests for forces to handle daily missions, including exercises and war-planning. Service component officials also have an administrative function, responsible for taking care of Space Force Guardians assigned to far-flung theaters. And in that decision determined that INDOPACOM would be the first to get a component.

Since then there has been a long-running debate about the exact role of the Space Force components vice those of the Army and the Navy, both of which have space operators in theaters, as well as SPACECOM.

To clarify for those not versed in US military organization, the Space Force is a military service with the mission to organize, train and equip forces. Said forces are then assigned to operational combatant commands, of which SPACECOM is one. Space Force’s first component command, Space Operations Command, was assigned to SPACECOM in October 2020.

SPACECOM, on the other hand, is a combatant command with both geographical and supporting functions. It is responsible for ensuring other combatant commands are being provided necessary space capabilities to do their warfighting jobs, and that SPACECOM operators are responding to theater needs. In does this in part through the Joint Integrated Space Team (JIST), comprised of military and civilian personnel from across the services who represent SPACECOM at the 10 other combatant commands.

Thompson said the Space Force component command will work with SPACECOM and the JIST in supporting INDOPACOM.

“It will be a close working relationship,” he said.

Following the establishment of Space Forces – Indo-Pacific, Thompson said service components would be stood up in South Korea and Central Command, most likely within the next year. European Command won’t be far behind, he added, but noted that “paperwork” still needs to be sorted with allies there.