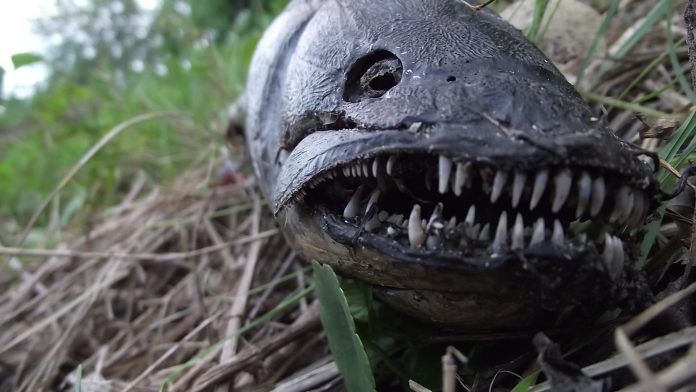 Demon Fish. Aquatic Chupacabra. And the unseen creature that touches your foot when you’re in dark water. Those are three notable guesses in the thousands of comments on a Facebook post of a mystery fish found in Florida. According to the Lexington Herald-Leader, kayaker Tammy Jenkins found the strange beast on the bank of the Ocklawaha River near Gainesville.

“It got my attention because it was ugly as dirt and looked like it came straight from hell,” Jenkins said. “At first glance, I thought it was a joke toy until I smelled it.”

She said the mystery fish smelled awful. Despite the humorous ID guesses on the Facebook post, the deceased fish is most likely a snakehead or a bowfin.

According to USGS, invasive snakeheads are a species of freshwater fish endemic to Asia and Africa. Like carp, they are prolific offspring producers and threaten native species. The first documented snakehead discovery in Florida occurred in 2000 with the introduction most likely coming from an aquarium dump or a live food market release. The sharp-toothed invaders have a long, body-length dorsal fin, which is why they are often confused with native bowfin. They are known to be able to breathe without water.

Bowfin, also known as mudfish or dogfish, are known to be able to breathe air, too. They are a long-lived species native to North America. Bowfin have distinctive skulls and sharp teeth that look similar to that of a piranha. Bowfin usually weigh up to 8.5 pounds. Florida’s state record, caught in 1984, weighed 19 pounds.

Despite inflation woes, Boeing says it can maintain $80M unit cost for F-15EX

DARPA’s Mandrake 2 satellites: communicating at the speed of light