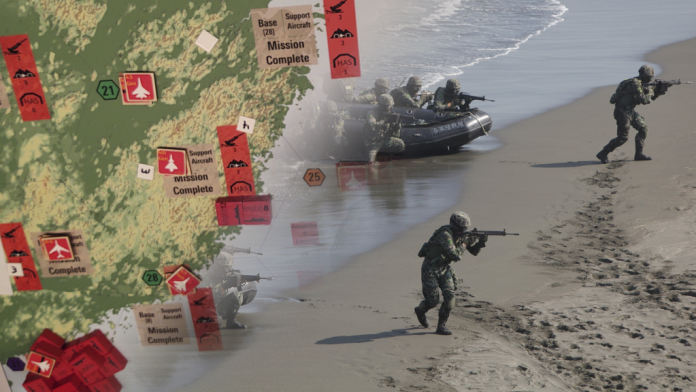 In August, Breaking Defense observed a wargame in which China invaded Taiwan and the US intervened — with bloody results. Such simulations abound, as Benjamin Mainardi of the Center for Maritime Strategy notes below, but in this op-ed he argues the US should be preparing for a much more complicated stand-off with Beijing.

No geopolitical prospect looms as large in Washington as war with the People’s Republic of China (PRC). Accordingly, the interservice race to take the lead in the Indo-Pacific continues to grow. Yet while wargames and articles abound on this or that aspect of what a conflict would entail, making eye-catching headlines and seemingly favoring one service over another, their provocative implications must be tempered with sober reflection upon the realities of the challenge at hand.

Perhaps most fundamentally, the outbreak of war as a conventional territorial conquest is taken for granted. But the framing of competition with China as hinging on a one-time engagement is at best a flawed approach and at worst a dangerous miscarriage of strategic foresight.

Few seriously grapple, for instance, with the dynamics of an attempted blockade of Taiwan or that war could emerge on another front. The PRC has already begun to experiment with informal mechanisms of blockade, similar to those implemented by Russia in the Black Sea prior to its invasion of Ukraine.

Rightfully so, the Biden Administration’s long-awaited 2022 National Security Strategy [PDF] identifies the relationship between the United States and China as “strategic competition.” The operative word being “competition.” Much as in Aesop’s fable of “The Hare and the Tortoise,” the winner in this race will not necessarily be who can out-scale the other the fastest but who can sustain a comprehensive, full-spectrum contest of diplomatic, informational, military, economic, financial, intelligence, and law enforcement capabilities over the long-term.

The persistent concern over what Beijing might do has created a burgeoning cottage industry of advocates of cure-alls for the “problem of China,” perhaps none as vocal as the proponents of a supposed bomber antidote. Eerily reminiscent of the fallacious belief that “the bomber will always get through” to compel civilian populations to terminate wars – which proved highly problematic in the course of the Second World War – war-minded advocates of airpower downplay China’s air defense capabilities, arguing that “the US bomber force, even at just 141 aircraft, is a good matchup against the Chinese navy and China’s overall maritime capacity.”

At a time when mass and attrition ought to be informing defense planning, as Russia’s war against Ukraine certainly signals, not at least genuflecting to potential losses in combat operations against the world’s largest armed forces is dangerous. Indeed, China’s military possesses some 2,250 combat-capable aircraft and thousands of surface-to-air missile systems — exponentially greater than any opponent the United States has faced in decades across a far more expansive area of operations — with sophisticated air power doctrine.

Given that the United States Air Force has no long-range escort fighter to support its next generation of bombers, is it ready to sustain losses in its bomber fleet — a lesson that should have been learned in the skies over Germany [PDF] — to say nothing of the complications of where such bombers will operate from given the ambiguities of status of forces agreements [PDF] in the event of conflict. An air campaign of some 141 bombers attempting to target 700 or more Chinese navy, coast guard, and maritime militia platforms [PDF] in the midst of a layered air defense network and one of the world’s largest air forces is likely to result in little more than many lost American aircraft and pilots.

But more than the flaws of the particular bomber argument is the implication that the conflict will be that simple to begin with. In reality, the threats posed by China are many and varied.

While many have begun to characterize the strategic competition with China as the new Cold War, the PRC arguably presents greater multidomain challenges than the Soviet Union ever did. Its economy is far more robust than that of the USSR at virtually any point in its history and is decidedly more interwoven in the global economic system. Competing with China, of course, will require military power, but it necessitates leveraging the full spectrum of national capabilities, from intelligence and diplomacy to international finance [PDF] and industrial capacity. [PDF]

Just as the administration’s recently released National Security Strategy [PDF] and National Defense Strategy [PDF] aptly identify, China’s challenging of international rules and norms extends far beyond the specter of a Taiwan invasion. Its militarization of islands in the South China Sea flouts the Permanent Court of Arbitration’s ruling against Chinese claims. Illegal, Unreported, and Unregulated fishing by Chinese fishing fleets threatens global fish stocks and is devastating local economies worldwide. Its international development investment mechanisms, though featuring less prominently in discourse in a post-Covid world, continue to yield geopolitical dividends, most recently in the Solomon Islands — a battle the Biden administration is attempting to redress. Moreover, China is the leading proponent of cybercrime targeted at the United States, its military, industries, and people.

With such diverse threats, each of the services has a role to play in the burgeoning strategic competition with the PRC. For their parts, the Marine Corps and Army’s stand-in force is more than a political signal. While it certainly does demonstrate the commitment of the United States to defending host nations on the ground, these forces are in the process of fielding multi-domain capabilities that can target not only the Chinese fleet, but support our own and that of allies, facilitate communications, collect intelligence, and provide flexibility for policymakers in times of crisis.

Similarly, the forward deployed vessels of the Seventh Fleet serve the Administration’s national security priorities of campaigning and integrating with allies and partners. All of which may well be rendered moot without investment in the Space Force’s ability to secure global communication and sensor systems. While there are debates to be had about the viability of sustaining such forces in the event of conflict, their presence and operations in peacetime invaluably deepen the relationships we have with our allies and partners, sway international public opinion, and counter grey zone operations all while facilitating conventional deterrence.

“[T]he option some advocate, of holding our maritime power near home waters, would inevitably lead to abandoning our allies. This is unacceptable, morally, legally, and strategically. Allied strategy must be prepared to fight in forward areas. That is where our allies are and where our adversary will be.”

In short, stand-off capabilities are insufficient to the challenge at hand.

Equally important, will be the contributions of the Departments of State, Commerce, Homeland Security, Energy, the non-military elements of the Intelligence Community, and more in competing with China across sectors and domains.

Far from anyone being left out, all the service branches will play important roles in a conflict with China, but also, critically, far before and below the level of direct conflict. It is a day-to-day competition with a dynamic adversary leveraging multiple dimensions of national power. Each service contributes to conventional deterrence by furnishing different capabilities, but in the context of a long-term strategic competition and finite budget resources, they must argue for them sophisticatedly, demonstrating multi-function utility for peace and war.

Benjamin E. Mainardi is an analyst at the Center for Maritime Strategy. He holds a master’s in War Studies from King’s College London. His primary research interests are in strategic studies and military history.

Does Ukraine Value Gun Rights Enough to Remain Free if They Defeat the Russian Invasion?