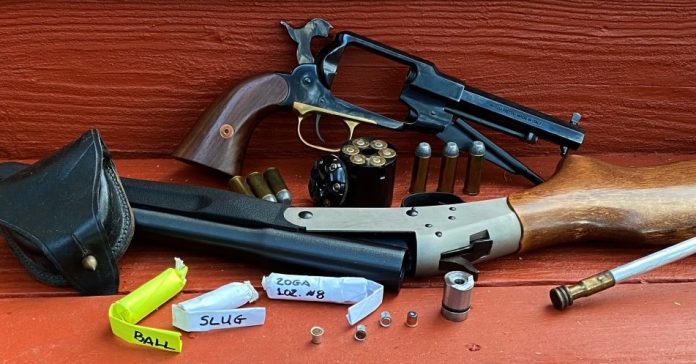 Six 20 gauge shotshells were primed with recharged shotgun primers. Note: The primers were recharged WITHOUT black powder in the primer bodies, and no tissue paper was used to close the flash holes. I measured out 7/8 ounce of #8 shot and added the same volume of black powder. This is what is called a “square load,” where the same scoop could be used for both black powder and for shot. I used homemade cardboard wads on top of the powder and the shot, with a few homemade cork wads to fill the shells, so they could be crimped.

The shells were fired in a 20 gauge New England Firearms single shot, with screw-in chokes. A Modified choke tube was used for the test. The results were a complete failure! Four of the shells fired, but ignition felt “sluggish,” and recoil was extremely light. The shot failed to penetrate a piece of thin aluminum flashing metal. The two shells that did not fire were carefully examined. Both primers had fired, but they had failed to ignite the powder!

Safety Note: When loading a muzzle-loading firearm, be sure to seat the projectile firmly, so there is no empty space above the powder.

In the second round of 20 gauge testing, a few granules of black powder were added to each primer body after inserting the anvil. I decided to use paper cartridges for this round, with both a homemade adapter and a commercial muzzleloading adapter from Short Lane. Making an adapter—as well as paper cartridges—is descibed in later sections of this article.

The second round of 20 gauge testing was a big success. A Cylinder bore choke tube was used, for easier muzzleloading. The “enhanced” shotgun primers set off every charge without hesitation, even with the Short Lane adaper, which has a fairly long flash channel. Surprisingly, the paper cartridges loaded with #8 shot gave fairly good patterns out to 10 yards. Accuracy as a “musket,” firing .570 round ball cartridges was good out to the 25 yard distance we had available.

I took the shotgun to an “open range day” at a local private range, and found that the little 20 gauge drew several people who wanted to try it. As the bore of the shotgun became fouled, it became harder to load cartridges, but the open range time ended before it became very difficult to load the gun. In the hunting field, I would have used the ramrod to knock out the adapter and would have run a patch wet with plain water down the bore—from the breach end—to push some of the fouling out the muzzle, followed by more patches to quickly dry the bore.

Black powder—or a black powder substitute such as Pyrodex— gave excellent results in testing, with no failures to fire, nor poor ignition. Smokeless powder gave very poor results and is not recommended for use with recharged primers, in any caliber.

People who shoot muzzleloaders are generally in one of two camps: traditionalist and “modern.” There’s absolutely nothing wrong with traditional muzzleloading firearms, and I love the look of a fine double-barreled shotgun from the 1850s, or a Hawken or Pennsylvania Rifle, or a French 1766 Cavalry Pistol. Any—or all—of these could serve you very well, or at least be a lot of fun to shoot.

The “modern,” or “inline” muzzleloaders generally have stocks that resemble modern sporting arms, and they allow for more options in terms of sights. Inline rifles and hunting pistols allow for easy mounting of optics, which is a blessing for those of us with older eyes. They also have the ignition at the rear of the barrel (hence the “inline” label) and generally make it easy to clean the barrel from the back, with an easy-to-remove breechplug. Inline muzzleloaders are often the choice of hunters who are not “into” black powder, but who want to extend their hunting season.

Which is better? That’s up to the person making the choice. I own both types of muzzleloaders, and I consider inlines the more practical—for me—as they’re easier to clean and are frequently available in stainless or other rust-resistant finishes. Some, like the CVA Optima, use a “break-open” action for accessing the breech and can easily be taken down like a break-open shotgun, for easy transportation and storage. I also benefit immensely from not having to look at tiny, fixed, open sights with my aging eyes. The first accessory I bought was a combination Picatinny rail and aperture (“peep”) rear sight, which made for much easier aiming.

I don’t find them faster to load than a traditional muzzleloader—and a smoothbore flintlock can be faster than any inline. The inlines are, however, much easier to unload than traditional black powder long guns. Hunters who use a traditional rifle—if they want to unload the gun upon returning from the field—can either fire the gun (not always a good idea, even with a good backstop), or they can remove the cap or priming powder and use a tool on a rod to “pull” the ball or bullet. It’s easier with a smoothbore, but the process is similar.

Inline shooters, on the other hand, can access the rear of the barrel quite easily. They can remove the primer or cap, dump out the powder, and use a ramrod to push out the ball, bullet or shot. With a modern shotgun using an adapter, the shooter first removes the primer. If the adapter can’t be removed with fingers, just keep the action open and push everything—the adapter, the powder and the projectile(s)—out the back of the barrel with a ramrod.

I still find inlines a fun gun to take to the range, in spite of their “ugly duckling” looks. I’ve used an NEF shotgun converted into an inline muzzleloader to show beginners some of the basic ideas of black powder, along with a traditional firearm to let them get a feel for what our ancestors used. Choose what you like, and use what works for you!

“The Gun That Won the West” is a title often associated with such famous firearms as the Winchester Model 1873, or the Colt Single Action Army. In terms of ubiquity in the Westward Migration, especially before the 1870s, one of the most common firearms was a single- or double-barreled, muzzleloading smoothbore. This might be a sporting shotgun, or it might be a repurposed smoothbore musket, but the truth is that a muzzleloading shotgun was inexpensive compared to some other firearms. Shotguns could be used to hunt anything from squirrels to deer or bear, depending on the ammunition used.

Even today, a muzzleloading smoothbore is a useful tool. It’s also one of the easiest firearms to create ammunition for in bad times. Ammunition for your shotgun can be made with very few tools.

Imagine that one of your relatives is forced to pick up and flee his home with little warning. His family arrives at your place with a .22 rifle with a few boxes of ammo, along with a double-barreled 16 gauge shotgun and only a handful of shells for it. You have no shells for 16 gauge, and it’s unlikely you’ll see any in the near future, but you have shotgun primers and black powder.

In this section, we’ll look at how you could make adapters for that 16 gauge—or any single- or double-barrel shotgun, along with paper cartridges that could be muzzle-loaded. It’s not fast to reload, nor is it ideal, but it could turn a gun without ammunition into a useful firearm for hunting and pest elimination.

The best part is that a muzzleloading adapter can be improvised in a few minutes, and the tools needed for making paper cartridges can be put together from things you may already have on hand. Paper cartridges are much faster and easier than loading with a powder measure and separate projectiles, and they work surprisingly well.

A high-quality, ready-made, muzzleloading adapter is available for .410, 20 gauge and 12 gauge shotguns, from Short Lane. I have one in 20 gauge, and it functions perfectly. It’s designed to prevent it being ejected when the gun is opened, and an O-ring keeps the adapter in place and keeps gas from blowing back into the action. They’re available at gunadapters.com (https://www.gunadapters.com/209-muzzle-loading-adapters/). The only drawback is that the adapters are pricey.

The good news is that you can make a functional adapter in less than five minutes, from a fired shotgun shell—preferably a “high-brass” shell that was fired in the same shotgun. Simply knock out the primer, and use a 1/4-inch drill but to open up the primer pocket. I chuck the bit into my unplugged drill and turn the empty shell onto the drill bit by hand. Cut off the plastic part of the hull, and your adapter is complete.

The drill bit opened the primer pocket so that you can remove a fired primer with your fingernails, without having to remove the adapter from the shotgun. Because the homemade adapter will be ejected or extracted, I quickly learned to open the shotgun partially—enough to remove the spent primer and insert a new one, but not enough to activate an extractor or ejector.

A ramrod is essential. A hardwood dowel can serve at first, at least for a shotgun. A metal rod makes a better ramrod. For my 20 ga. shotgun, I purchased a 3/8-inch diameter aluminum rod from a hardware store. Note that aluminum is okay for a shotgun—if it is kept clean and free of oxidation—but I strongly prefer brass or steel for rifled barrels.

From Dixie Gun Works, I purchased item “UA0105 .50 Caliber Brass Rod, Tip, and Jag Combination 10×32.” It is currently listed for $4.95 and fits a 3/8-inch rod. I epoxied it on with JB-Weld, then drilled a hole in the side of the shank for a small, brass nail to fit through. I cut the nail a little longer than the diameter of the ramrod tip and carefully hammered the ends to flare them slightly. Finally, I smoothed the hammered ends with sandpaper. There is no ramrod channel on a modern shotgun, but my ramrod is only as long as it needs to be and is not difficult to bring along. It’s useful in both loading and cleaning the shotgun.

Other useful accessories include a means of carrying primers and paper cartridges to feed the shotgun. For the former, I use a simple cap pouch, as was used in the US Civil War for carrying musket caps. Dixie Gun Works sells a basic one under item number MA1503, for $19.95. To carry cartridges, I have used a belt pouch intended for a digital camera. Ideally, a cartridge pouch should protect the paper cartridges from moisture and hold them ready for easy access. Any simple, flap-top belt pouch of waterproofed leather or nylon should serve well. Alternatively, a plastic box for playing cards, cigarettes, or other items could be used to carry cartridges in a pocket. I like to bring along a plastic box meant for carrying a bar of soap, containing a ziploc bag loaded with extra cartridges and shotgun primers, and the box sealed with Duck tape. That is cheap insurance if something happens, like a thunderstorm or an unexpected dunking in a creek or river. (The latter has happened to me.)

(To be continued tomorrow, in Part 5.)

December 9th, 1914 was the birthday of Maximo Guillermo “Max” Manus.

How to Get Home After the SHTF

Let the Air Force let go of the E-3 ‘Sentry’