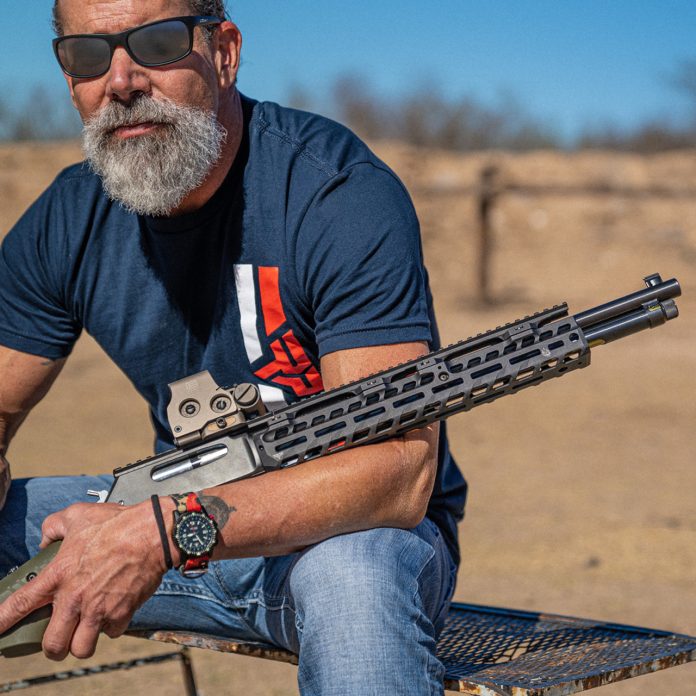 Ranger Point Precision (RPP) was one of the first companies that started making modernization products for lever action rifles and Chris Costa of Costa Ludus was one of the first instructors who developed tactical lever gun training courses. The two companies have now teamed up to introduce the new Costa Collection of modern lever gun accessories with the first product in the line being the RPP Costa Ludus M-LOK Handguard & Modular Rail System for Henry rifles.

RPP Costa Ludus M-LOK Handguard & Modular Rail System consists of an M-LOK handguard, a receiver Picatinny rail and rail sections called Gator Rails that are attached to the top of the handguard. The modularity of this system is in the possibility of having multiple configurations of the top rail by playing with the type, number, location and orientation of the Picatinny rail sections. According to RPP’s description of the product, this system was designed to “provide lever gun shooters with exceptional flexibility in setup and cost while safeguarding the qualities of lightweight handling and accuracy that we love about these fine firearms“.

Gator Rail installed at the rear of the handguard.

The RPP Costa Ludus M-LOK Handguard & Modular Rail System is machined out of 6061-T6 aluminum and has a Type III anodized finish. As specified by Ranger Point Precision, this system is compatible with the following models of Henry lever action firearms: Henry Side Gates, X Models, Color Case Hardened, Big Boy Steels, All Weather, .410 Axe rifles. It is not compatible with these Henry guns: Henry Long Rangers, Single Shots, 22 Rimfires, Barrel band models, 45/70 H010GCC and 30-30 H009GCC with the longer forend and 22″ octagon barrel. The handguard is 13.5″ long and when installed, partially covers the magazine tube loading port so the latter can’t be used for loading the guns equipped with this system. Besides the M-LOK slots on the sides and bottom, the handguard also features QD sling swivel sockets as well as a threaded sling stud hole at its very front portion.

Gator Rail installed at the same spot on the handguard as in the previous picture, except flipped 180 degrees, which makes it overlap the receiver.

Ranger Point Precision Costa Ludus M-LOK Handguard & Modular Rail System for Henry rifles is listed on the RPP’s website at an MSRP of $254. The price includes the handguard and one Gator Rail. When ordering, you can add the second Gator Rail for $55 as well as the receiver rail for an additional $40. RPP Costa Ludus M-LOK Handguard & Modular Rail Systems for Marlin, Rossi and Winchester lever action rifles are in the works and will be available in 2023.

More information on the features, installation and compatibility with Henry rifle models can be found on Ranger Point Precision’s website as well as on the Wolf’s Prairie Outdoors YouTube channel.

Gear Rx: How to Weather or Season a Canvas Tent